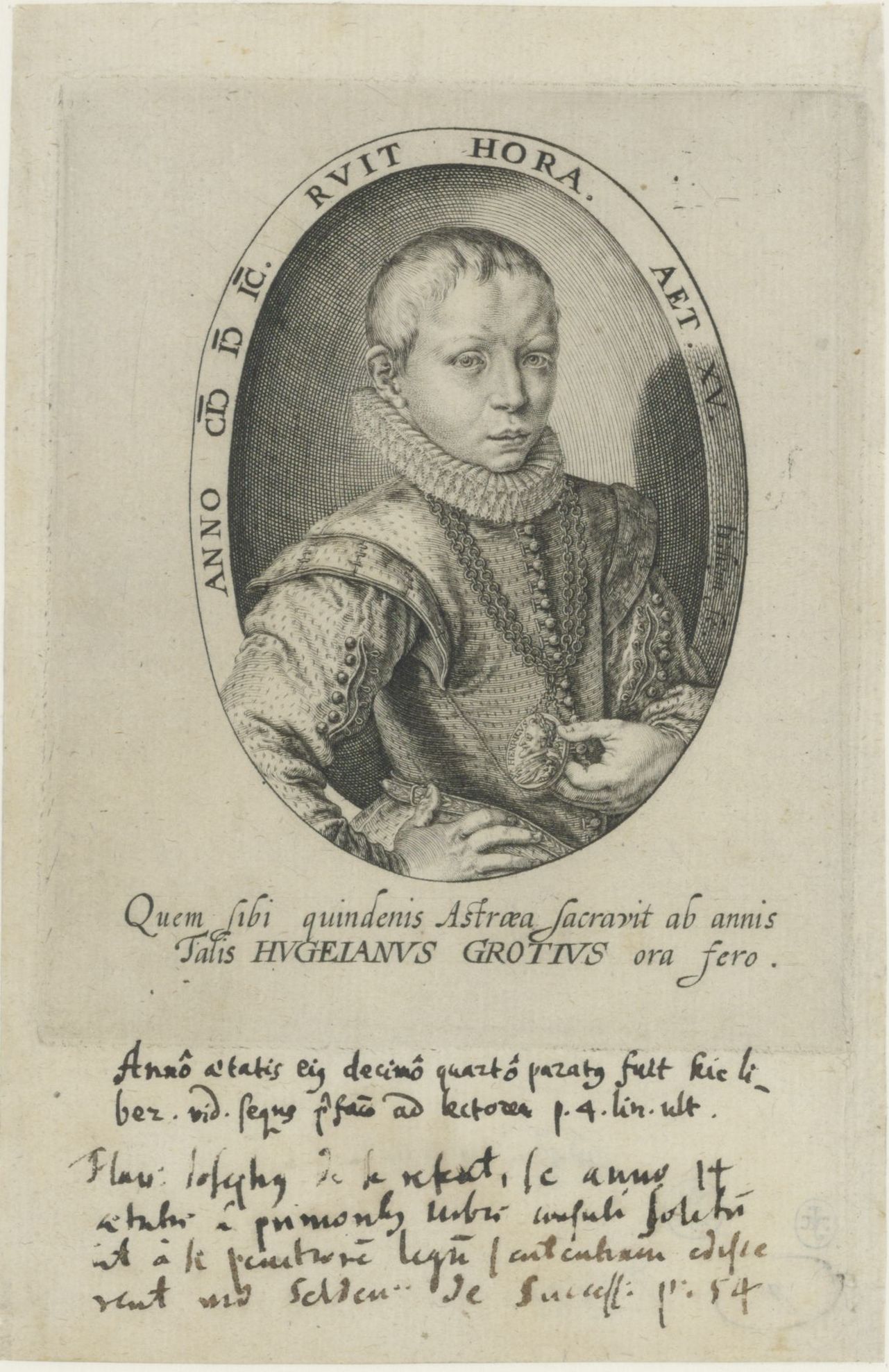 When Jacques de Gheyn II made this portrait of the fifteen-year-old Hugo Grotius (1583-1645) (see cat. 36) the two had known one another for some time. At only twelve, the child prodigy had written the verses for one of De Gheyn’s print series.1 At that time they were both living in Leiden, where they probably met through acquaintances at the university; Grotius was studying law and De Gheyn had many erudite friends. When this engraving was created, Grotius had finished his studies and was just back from France. He had accompanied Stadholder Johan van Oldenbarnevelt (1547-1619) and Justinus van Nassau (1559-1631) on a diplomatic mission to the French court and had obtained a law degree in Orleans. During a visit to Paris, Grotius was given a medallion by King Henry IV (1572-1610), which he holds in this print.

In preparation for the engraving, De Gheyn drew the portrait of Hugo Grotius very finely in metalpoint on a bright yellow prepared tablet.2 The print creates a remarkable effect of depth, as if the boy could step out of the frame at any moment. Grotius’s right hand is placed on his hip, and his pose is slightly turned, so that his elbow seems to protrude from the picture plane. Furthermore, his body casts a shadow on to the other side of the oval frame, ‘covering’ part of the inscription. The motto Rvit Hora – “Time Flies” – is written at the top and, beneath the image, there is a reference to his appointment as a lawyer in The Hague in the year the print was published. The engraving was included in Grotius’s first major publication, his book about Martianus Capella’s Satyricon.3

The handwritten Latin inscription under Grotius’s likeness makes clear that the author of this book (hic liber) had written it in his fourteenth year. It compares Grotius with the writer Flavius Josephus, who had also been admired at the age of fourteen. This sheet may previously have been part of the copy of the book now in the Staatsbibliothek in Munich and which once belonged to G. Remus, the German lawyer, philosopher and poet Georg Remus (1561-1625).4 Various notes made in the margins of that book are in a hand that shows remarkable similarities to the writing on the print discussed here. What’s more, this print is missing from the book in Munich.

1Omnium rerum vicissitudo est (The New Hollstein 68-76); he would go on to provide texts for other prints by De Gheyn.

4Bayerische Staatsbibliothek, Munich, inv. no. A.lat.b. 202 k. In various sale catalogues there are references to books, ‘with notes by G. Remus’, which suggests that Remus frequently made notes in his books.