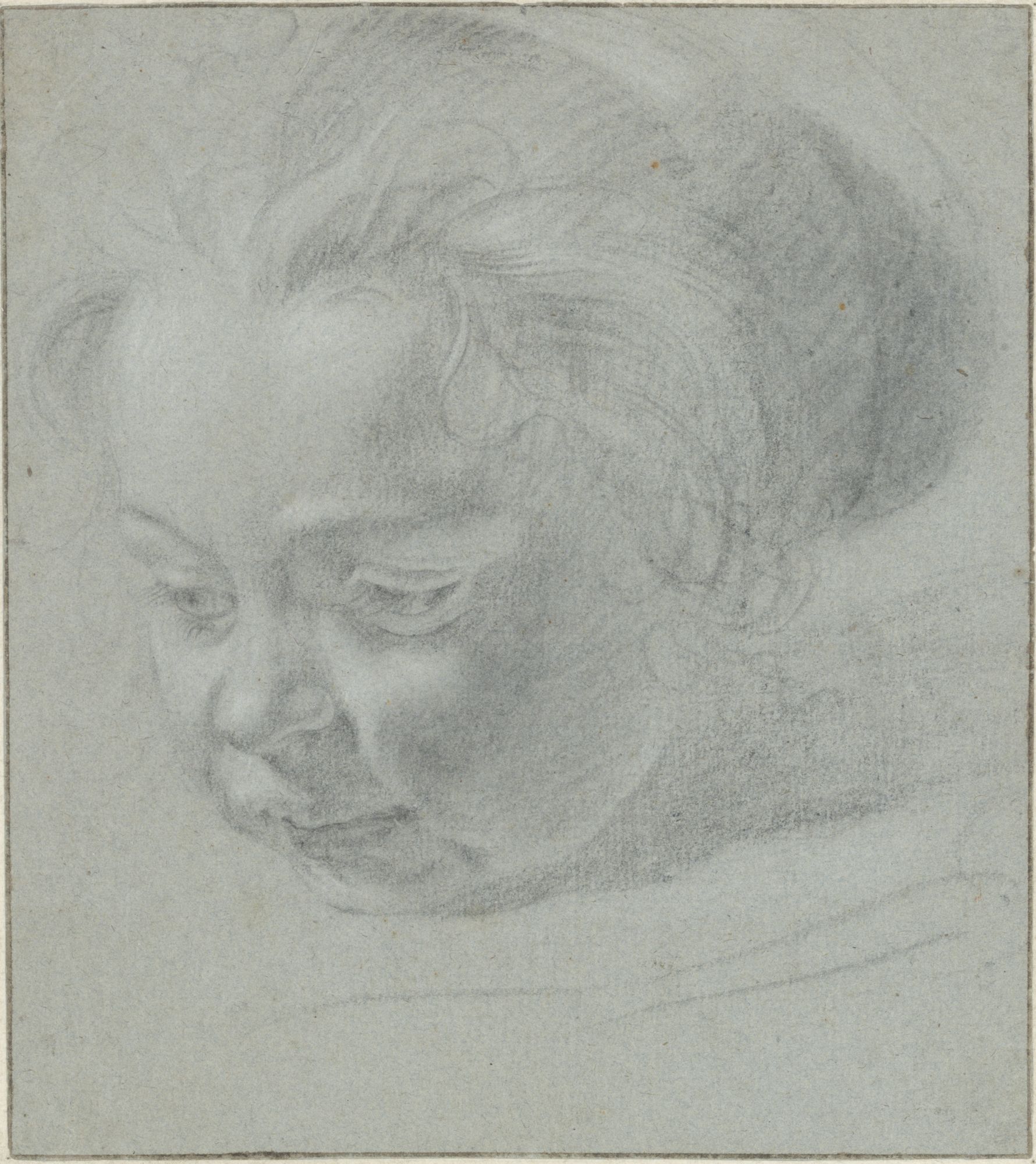 As a painter of family and children’s portraits, Cornelis de Vos enjoyed great fame in and around Antwerp at the beginning of the seventeenth century. His portraits of individual children from the middle classes were innovative.1 De Vos excelled above all in capturing the intimacy and tenderness of his usually young models. It is therefore not surprising that many drawn studies of children are attributed to this Flemish artist. It was Katlijne Van der Stighelen who brought order to the incoherent group of drawings and confirmed the attribution of twelve sheets as being by the artist’s hand.2

This drawing of a girl’s head can be convincingly added to the group.3 It was done with the usual combination of black chalk and highlights in white, although the lack of red chalk and the use of blue paper are striking. The soft modelling of her chubby child’s cheeks, the wisps of curly hair around her head and above all the delicately rendered eyelashes betray affection for the model. A drawing of a sleeping child in the musée du Louvre and a sheet of various studies of heads and hands give the same impression.4 The latter was a study for the 1627 painted portrait of his fifteen-month-old daughter Susanna (1626-1662).5 It is quite possible that one of De Vos’s daughters was also the model for the drawing discussed here. Her features unmistakably resemble those of his eldest daughter Magdalena (1618-1680), as we see in her painted portrait in the Duke of Devonshire’s collection.6

The cursory sketch in black chalk on the back of this sheet was previously linked to Rubens’ Roman Charity (Cimon and Pero) in the Hermitage.7 What is striking, however, is Pero’s bare foot – exposed as she crouches – which does not appear in Rubens’ painting. This specific pose and the visible foot actually appear in a version of this scene by Dirck van Baburen (c. 1594/1595-1624) who was active in Utrecht. It is quite possible that De Vos, like Rubens, had seen the painting which was executed in Utrecht in 1623. According to an early source, the painting, now in the collection of the City of York in England, was in Antwerp in the seventeenth century.8

Private collection, France (as part of an album assembled in the nineteenth century); the dealer Jean-Marie Le Fell, Paris; from whom bought by the Fondation Custodia, 2002 (inv. no. 2002-T.7)

6Bakewell, The Duke of Devonshire and the Chatsworth House Trust, inv. no. 696.