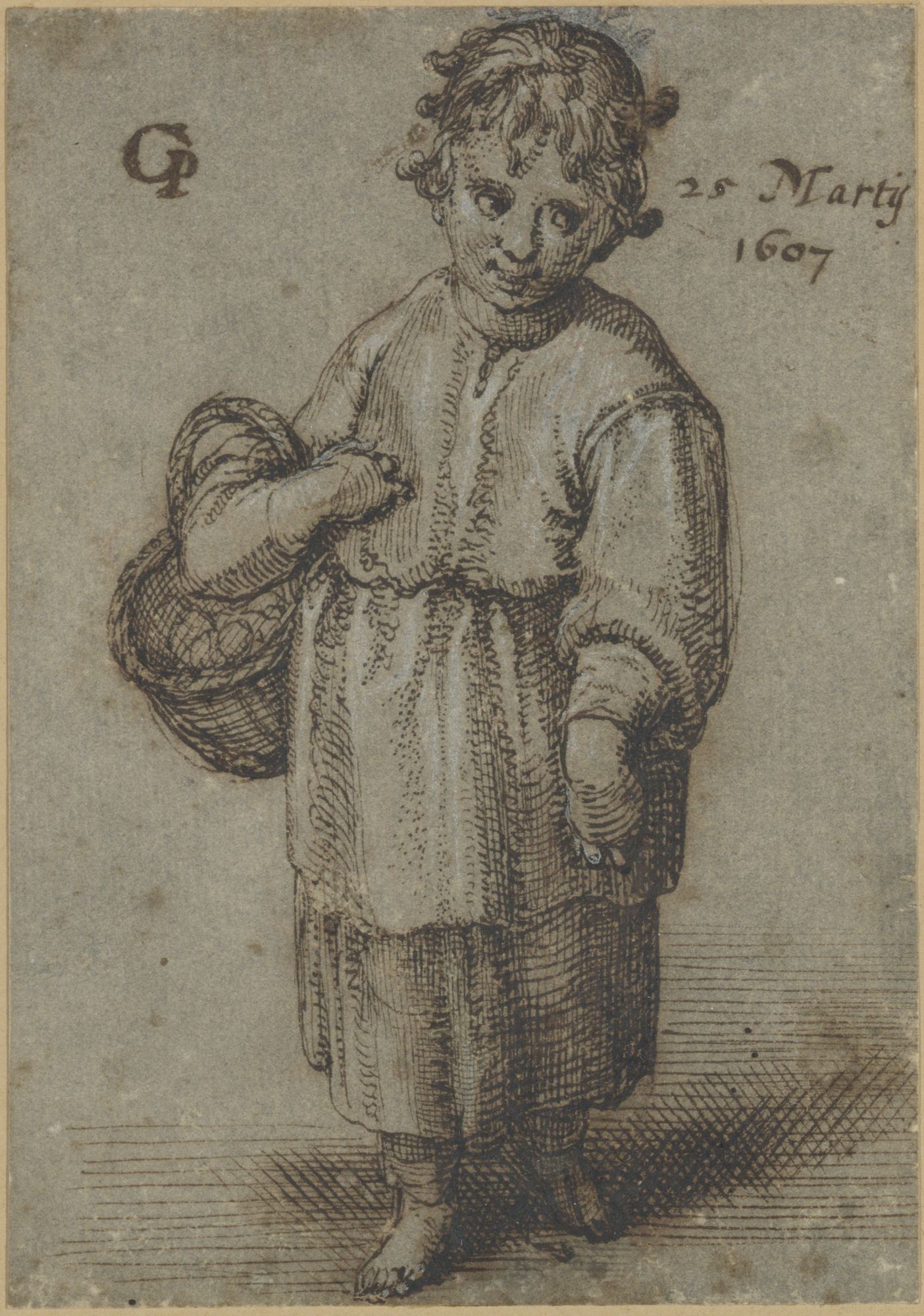 The use of pen in this drawing is reminiscent of the work of Jacques de Gheyn II (1565-1629) and Hendrick Goltzius (1558-1617), particularly in the thick hatching lines and the stippling.1 The artist must have moved in the same artistic circles for a while. Gerrit Pietersz., the brother of the composer Jan Pietersz. Sweelinck (1562-1621), spent around two years of his apprenticeship in Haarlem in the workshop of Cornelis Cornelisz van Haarlem (1562-1638) and according to Karel van Mander remained ‘in Haarlem for three or four years working on his own’.2

We know that Pietersz.’s fellow townsmen felt very strongly about the observation of nature and that drawing from life was an important part of an artist’s schooling. As far as we know, Pietersz. seems to have been less impressed by this. This figure study in pen and ink is unique in his drawn oeuvre. The rest of his works are finished mythological and biblical scenes, drawn uit de gheest (from his imagination) in a Mannerist idiom that was extremely popular in Haarlem around 1600. One problem, however, is that few drawings by Pietersz. have survived, although he must have made a great many.3

Pietersz. probably encountered this girl in Amsterdam, where he returned around 1600.4 She is barefoot and carries a basket filled with apples or eggs in her right arm. She looks to the side with a rather shy but sweet expression – as if the artist had just asked her to stand still for a moment. Her pose is very similar to one of the girls in the foreground of his painting of John the Baptist Preaching, however he painted that in 1606, a year earlier than this drawing.5

Julius Held remarked that the girl has two club hands, a congenital deformity.6 The artist may have been attracted by this phenomenon as a peculiarity in the world created by God, like Jacques de Gheyn II who drew a boy who was deaf and dumb.7

Carlos van Hasselt and Charles Ryskamp, Rembrandt and his Century. Dutch Drawings of the Seventeenth Century from the Collection of Frits Lugt, exh. cat. New York (The Pierpont Morgan Library) and Paris (Institut Néerlandais) 1977-1978, no. 79; Karel G. Boon, The Netherlandish and German Drawings of the XVth and XVIth Centuries of the Frits Lugt Collection, Zwolle (Waanders) 1992, no. 158

3Some other known drawings by Gerrit Pietersz are: Mercury, Museum Boijmans van Beuningen, Rotterdam, inv. no. MB 1975 / T28, Odysseus and Tiresias, National Gallery of Washington, DC, inv. no. 1982.16.1, Annunciation of the Shepherds, Rijksmuseum Amsterdam, inv. no. RP-T-1911-105. In total his drawn oeuvre consists of about sixteen drawings.

4The birth of his son Jan Gerritszoon (c. 1601-1660) in Amsterdam places Gerrit Pietersz. there at that time. Furthermore, his activity in Amsterdam from around 1600 is confirmed by his role as the teacher of Pieter Lastman (1583-1633) and others.