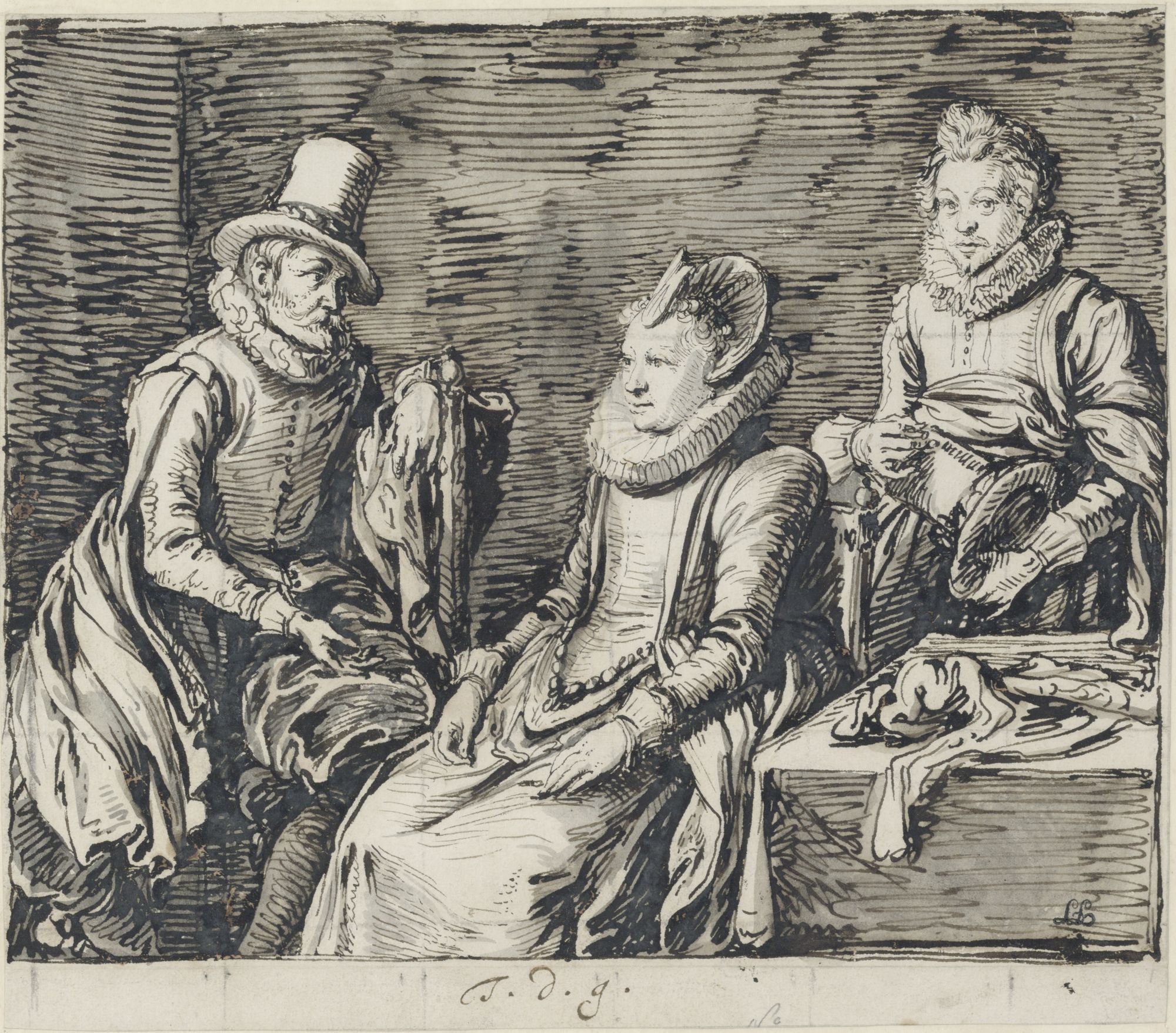 Jacques de Gheyn II’s masterly use of the pen is one of the qualities that make him extremely popular as a draughtsman to this day. This student of Hendrick Goltzius (1558-1617) was unrivalled in handling his inked pen sparingly or more generously and allowing it to glide in time with his ideas. His later work is often less stylized and graceful: the lines appear to be rather restless.1 In this sheet, for instance, there are no flowing lines that swell and taper. De Gheyn hatched in a number of directions. He filled the entire background with these repetitive strokes and let the figures stand out against it by using the white of the paper. In some places a touch of wash strengthens the modelling of the trio.

It was exceptional for De Gheyn to portray three figures in one composition.2 In the dozens of portraits he made – mainly small scale and executed in metalpoint – there is usually just one figure depicted. That might be why this scene looks somewhat disjointed, and it is his inexperience in the portrayal of groups of people that we notice. There is no connection between the three figures. The woman sits in a chair, turned away from the viewer as if she is posing for an individual portrait. The man looks in her direction – in a pose that anticipates the looseness of the figures of Frans Hals (1582/1583-1666)3 – but he seems to be staring behind her. The young man on the right, who has taken off his hat, is the only one looking at the viewer, creating the impression that he may be the artist himself. Although the relationship between them is not obvious, they seem to be a father, mother and their son.

Previous authors thought that Jacques de Gheyn II may have portrayed himself with his parents (posthumously)4, or as the father, with his wife Eva Stalpaert van der Wielen and their son Jacques de Gheyn III (c. 1596-1641).5 Another possibility is that this family portrait is of Christiaan I Huygens (1551-1624), his wife Suzanne Huygens-Hoefnagel (1561-1633) and their eldest son Maurits Huygens (1595-1624).6 De Gheyn knew Christiaan I’s family in The Hague and was approached by the stadtholder’s secretary (in vain) to teach his sons drawing. The squaring of the sheet was probably intended for transferring the composition into a painting but, if it was ever executed, its whereabouts are unknown.

Inscribed, lower centre, in pen and brown ink, J.d.G; below that, in graphite, No [partly cut off]

2The Portrait of Johan Halling in the Rijksmuseum, Amsterdam (inv. no. RP-T-1957-257) is another sheet featuring three figures, but the woman and the child could be a later addition, see K.G. Boon, Netherlandish Drawings of the Fifteenth and Sixteenth Centuries, The Hague (Government Publishing Office) 1978, no. 223.