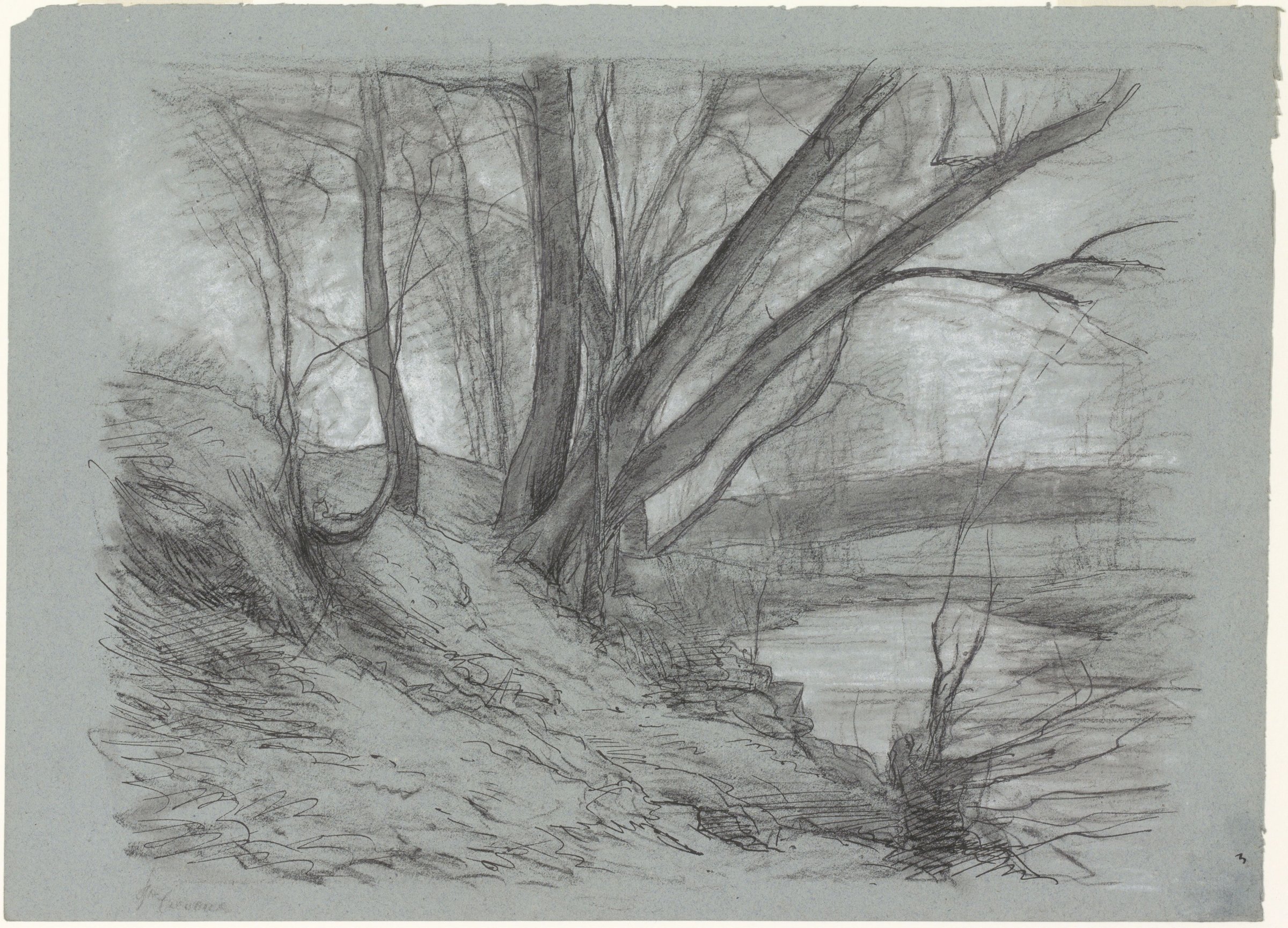 The Lyonese Joseph Trevoux began his training in 1854 in the studio of Jean-Louis Janmot (1814-1892), subsequently undertaking a career as a landscapist. In 1858, he moved to the village of Vignieu, very near Morestel where Auguste Ravier (1814-1895) (see cat. no. 65) had settled. From then on, he put to good use the latter’s advice to compose from nature, during work sessions that he shared with his painter friend Paul Borel (1828-1913). The first paintings that he showed at the Lyon Salon, in the early 1860s, depicted the surroundings of Morestel and other towns of the Dauphiné. The very free style of his canvases – often worked with the knife – and their bold colours successively drew caustic criticism relayed by the Lyonese press, but other authors discerned in him “a highly personal manner, hostile to conventions and that with robust sincerity achieves an impressive emotion”.1

These remarks can also be applied to his drawings, which the artist permeated with a harsh sensibility attuned to the grandiose, occasionally tormented landscapes of his region. Our sheet, acquired in 2012 with three other drawings2 by Trevoux that had also belonged to his son-in-law the book printer Éleuthère Brassart, further illustrates the artist’s fondness for original framings. He composed this winter landscape around the bare outline of some trees overhanging a riverbed. Their slanting, vertical lines create a downward motion that leads the eye towards the stream. Trevoux marked the upper edge of his drawing with a faint charcoal line, abridging the rest of the motif in order to retain its visual effectiveness. With an impetuous pen, in black ink, he heightened the contours of the trunks and the uneven ground of the bank to emphasise the flat tints of fusain, largely blended with a stump. Finally, he applied strokes of white chalk between the trees and over the surface of the water to suggest a cold light, using the colour of the paper as a mid-tone, according to a technique notably practiced by the landscapists of the previous century. Bereft of all human presence, this nature’s nook is steeped in a contemplative and melancholy mood, as are most of the drawings he did in the Lyonese hinterland.3

These four sheets by Trevoux, the first in his hand to enter the Fondation Custodia collections, confirm the choice position of the Lyonese School landscapists among its recent acquisitions. Just like the works by Auguste Ravier and Jean Michel Grobon (1770-1853) (see cat. no. 41), the landscapes by Trevoux evoke a particular land, rendered by the artist with an unconventional mastery. MNG