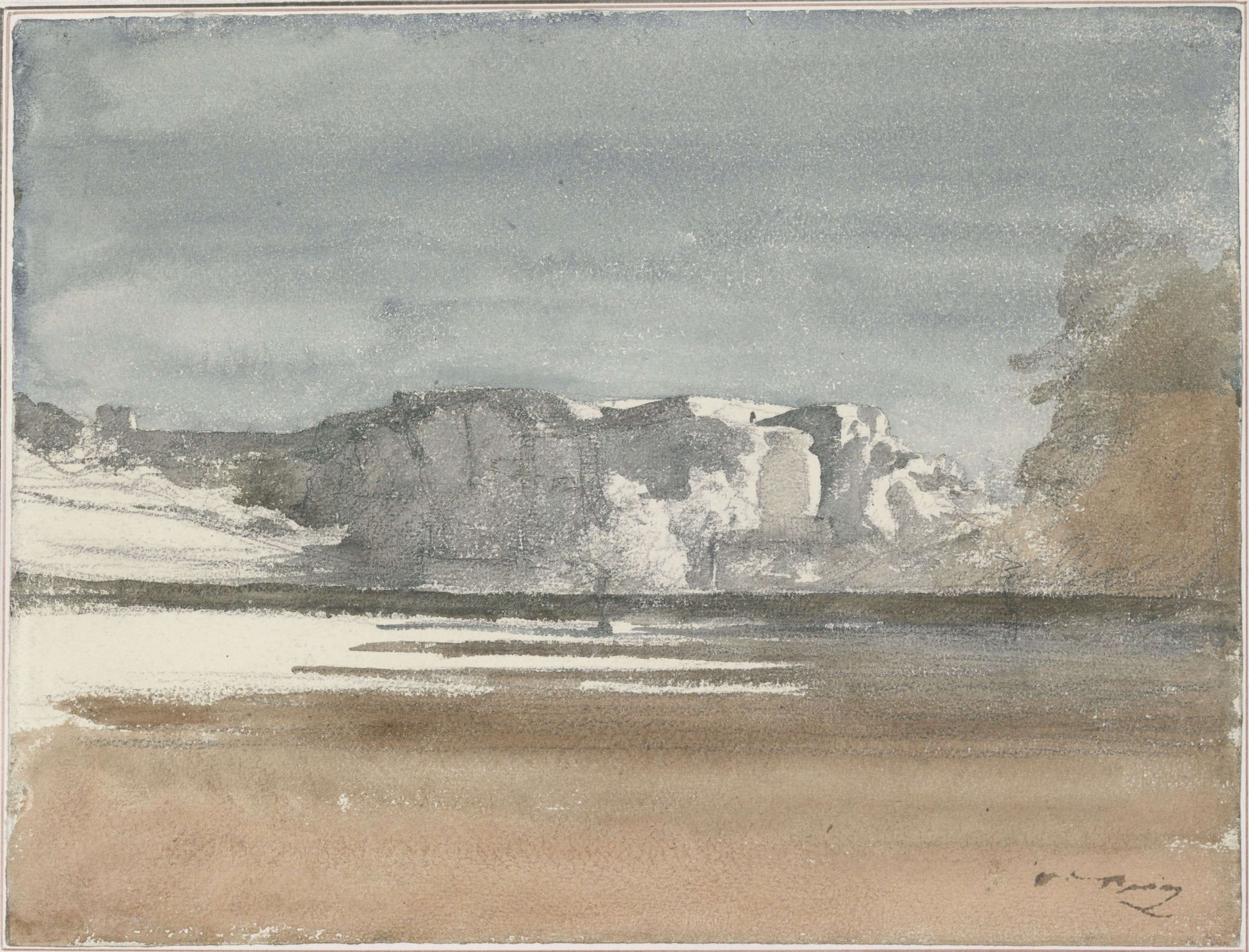 He may have had difficulty gaining the recognition of the Parisian public, but the Lyonnais François-Auguste Ravier succeeded in winning the admiration of his peers, in particular Pierre Puvis de Chavannes (1824-1898) and Albert Maignan (1845-1908).1 After several stays in Italy,2 he settled in the Dauphiné in 1849. From that time on, Ravier’s property at Crémieu, in the Isère, became a gathering place for many artists, including Camille Corot (1796-1875) (see cat. no. 16) and Joseph Trevoux (1830-1909) (see cat. no. 73).3

The Fondation Custodia’s collections include three landscape oil paintings, of which two are sketches;4 and six landscapes on paper, in watercolour or oil.5 These oil sketches, executed from life, were highly admired by Ravier’s painter friends, although he reportedly limited his use of watercolour to the studio, developing the compositions of his paintings on paper.6 However, there is no painting that appears to be derived from our drawing, which should consequently be considered an autonomous work.

The palette that Ravier used here, with a great economy of means, offered a very limited colour range. Cold blues and greys respond to the ochre red to compose the features of this view – earth, rocks, and sky. The reserves of paper play an essential part, modelling the volumes of the composition in intense light. However, interpretation of this landscape is far from univocal: the ochre flat tint along the right edge of the sheet, in its middle part, remains difficult to interpret. As for the impressive subject of these mineral formations, it might call to mind the rocks in the vicinity of Morestel,7 where Ravier spent the last period of his life. The region, located on a calcareous plateau possessing a characteristic geology, was a boundless source of inspiration for the artist. In this work, he rendered the rough texture of these rocks with an almost dry brush that caught on the grain of the paper. This landscape, with its visionary abstraction, lacking any tangible indication of scale or place, owes its timeless character to this very absence.8 Although held in the highest esteem by the critics of Lyon for his “impressions”,9 Ravier would always remain on the sidelines of the Impressionist movement. MNG

3For a thorough biography of Ravier, backed up by his correspondence, see Christine Boyer Thiollier in ibid., pp. 15-36.