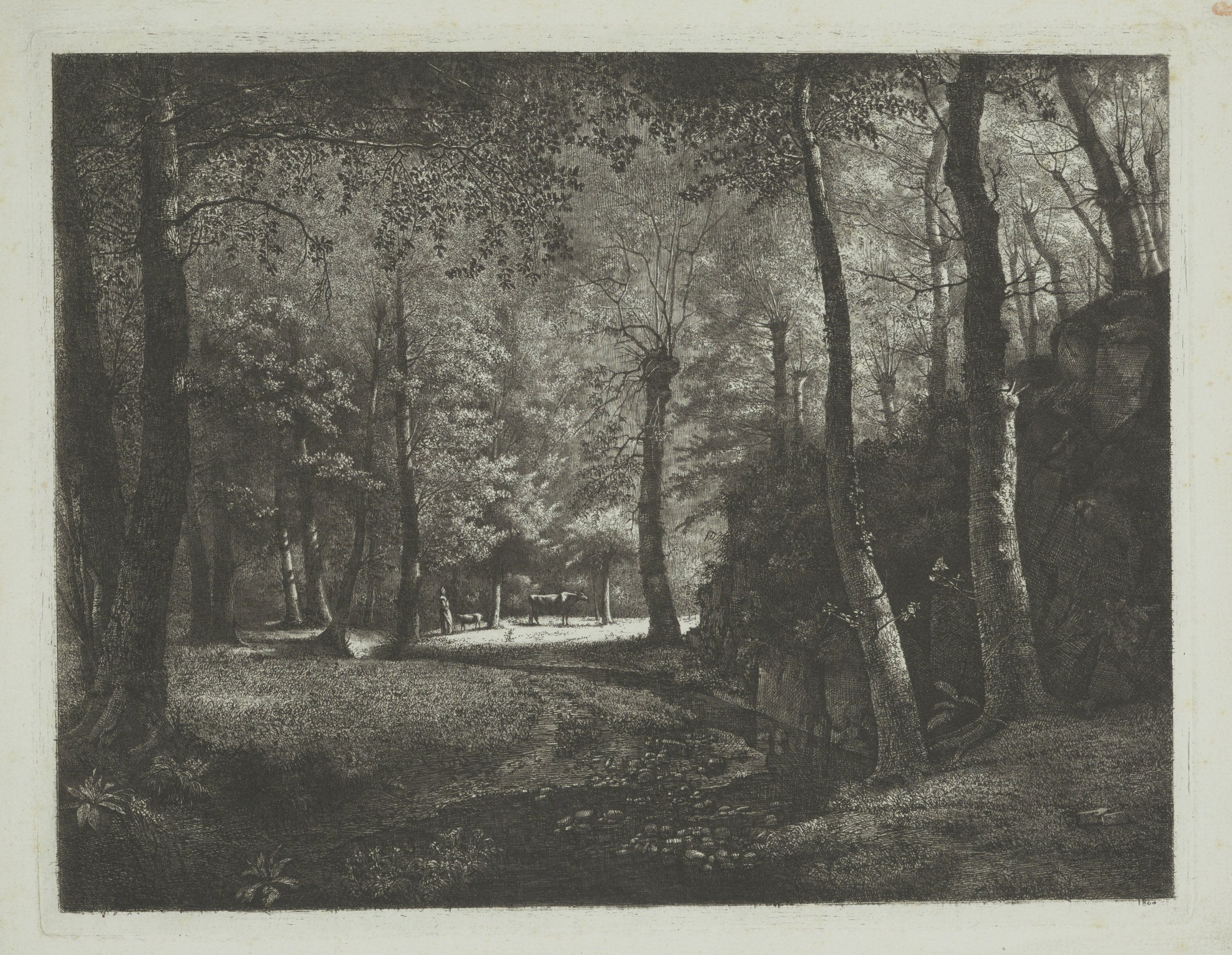 An artist endowed with a precocious talent, trained in drawing and sculpture at a very early age, Jean-Michel Grobon revealed his gifts as a landscapist during his stay in Paris in 1789. His plans to travel to Italy were scuppered by the Revolution, so it was in the Lyonese that Grobon spent most of his career and found his inspiration. In Lyon he formed a friendship with his compatriot Jean-Jacques de Boissieu (1736-1810), who shared his lodgings with him. Instructed and encouraged by De Boissieu, Grobon took his first steps in etching, a medium that he utilised only exceptionally – just six prints compose this corpus1 –, but with an outstanding aesthetic sensibility.

In 1794 Grobon painted a Forest of Rochecardon,2 which he presented at the Paris Salon of 1796. It was received with great enthusiasm, most notably from his peers Jacques-Louis David (1748-1825) and François Marius Granet (1775-1849).3 For the landscapists of this generation, the work was viewed as a manifesto; it stood out on account of its naturalism steeped in Rousseauist philosophy – prefiguring the aesthetic theories of the Barbizon School4 – and its innovative treatment of the light.5 Four years later, empowered by that success, Grobon returned to this composition, interpreting it in an engraving of the same dimensions as his painting. Étienne Grafe, in his attempt to catalogue Grobon’s engraved work, listed three known states of this print.6 The first state, acquired by the Fondation Custodia in 2017, is an extremely rare work, all the more exceptional as it is printed on coloured paper – in all likelihood a unique case. Apparently the printing challenged the artist on several technical issues: the trial-proof was deemed too dark by the printer, and on his advice, Grobon scraped his plate smooth, then worked it over with the roulette and the burin.7 This resulted in a technically flawless impression, which renders the depth of the blacks as well as the spared parts and the half-tones. The subtle balance is enhanced by the delicate blue tint of the paper. Carved by the light, the dense masses of vegetation rule the composition. In spite of the saturation of the sheet, which allows the eye no escape, the space remains tangible and air flows between the planes. The combined use of different engraving tools provided the artist with a rich array of effects: descriptive precision of the etching needle and the burin to render the foliage, and tonal gradations obtained with the roulette creating an enfolding mood.

This print is the first work by Grobon to enter the Fondation Custodia collections, where it joins the graphic works of landscapists of equally singular talent, such as Alexis Vollon (1865-1945) or Léon Bonvin (1834-1866). MNG