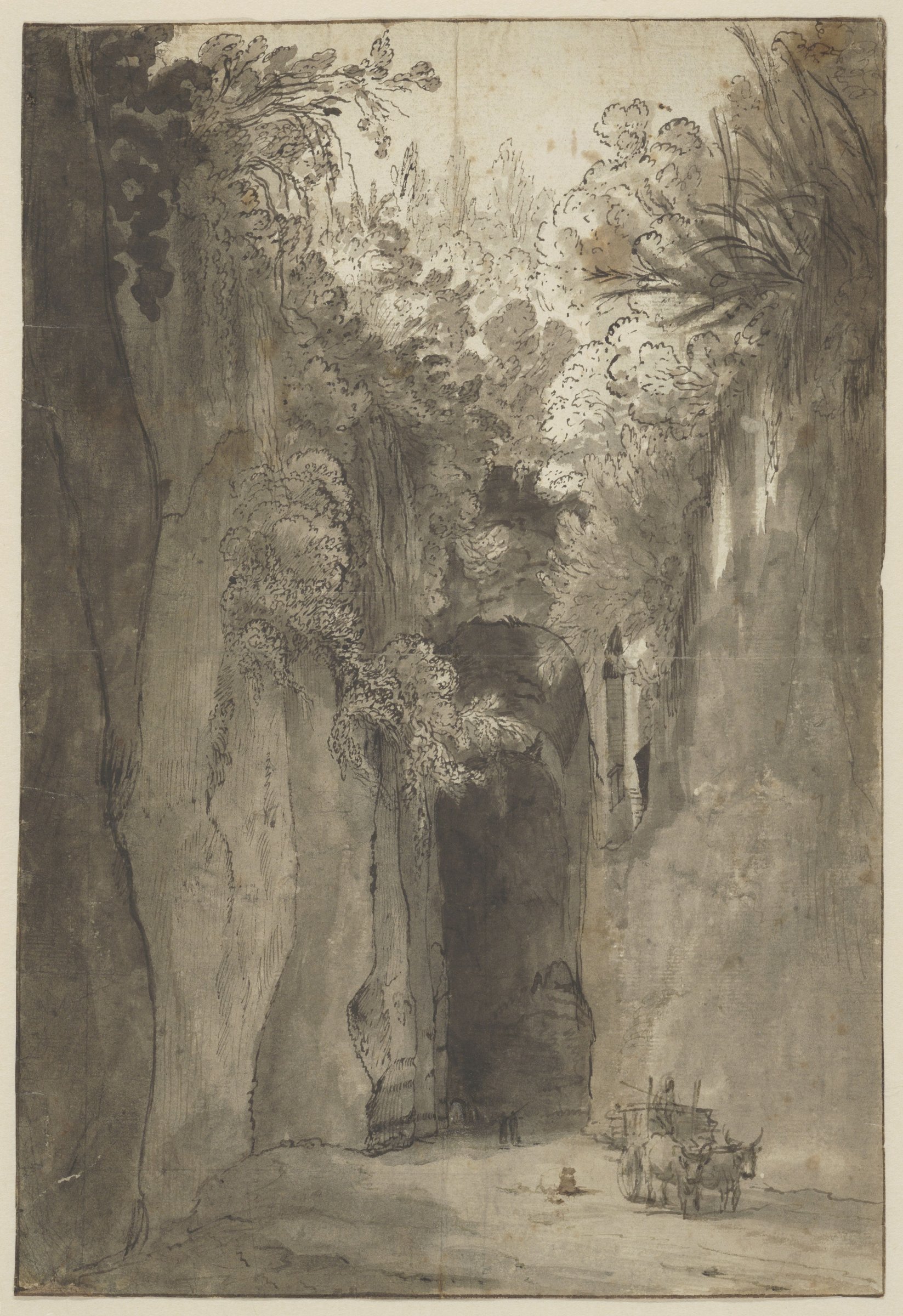 Artists down the ages were utterly fascinated by the tunnel that runs for more than 700 metres between Pozzuoli and Naples, which is also known as the “Grotta di Virgilio”. It was hacked out by hand in Roman times and was depicted by Willem van Nieulandt (1584-1635) and Willem Schellinks (1627-1678), as well as by later generations of foreign artists who went to study in Italy.1 This sheet shows the eastern entrance, on the Naples side. An ancient legend has it that this spot, high above the antique road and to the left of the entrance, is the site of Virgil’s tomb. The columbarium, consisting of a small, domed stone structure, is not visible in this drawing, but it can be seen in one that was made by Joseph-Benoît Suvée in 1775 (see cat. no. 70).

According to the old inscription on the verso of the sheet, which probably dates from the eighteenth century, this drawing is by Schellinks. However, the heavy, imprecisely applied washes and coarsely drawn vegetation are not in his style. Both Jeroen Giltaij and Ingrid Oud suggested an attribution to an artist in the circle of Bartholomeus Breenbergh (1598-1657).2 Peter Schatborn then compared it to the work of Cornelis van Poelenburch (1594-1667).3 Both artists were working in Rome around 1620. Their drawing styles, typified by the passages washed with brown ink and the use of the white of the paper as a source of light, are sometimes deceptively similar. On the one hand Entrance of the Grotta di Posillipo near Naples displays similarities to Breenbergh’s work, such as the sketchy vegetation done with the brush and dark brown ink.4 On the other hand, the curly, slightly repetitive rendering of the foliage is typical of Van Poelenburch.5

The drawing was part of the collection of Johan Quirijn van Regteren Altena (1899-1980), one of the last century’s most important collectors of drawings in the Netherlands, and a formidable rival of Frits Lugt at auctions. He, like Lugt, found it difficult to choose between a career as an artist and one as an art historian.6 He eventually opted for the latter, partly on Lugt’s urging, and graduated from Utrecht University in 1929. While he was studying he worked as an assistant to Lugt, and after graduation found a job with his uncle, the art dealer Nicolaas Beets (1878-1963). Subsequently, he worked as a curator at Museum Fodor, Museum Willet-Holthuysen and the Amsterdams Historisch Museum, and was appointed director of the Rijksprentenkabinet in Amsterdam in 1948. More than 30 years after his death in 1980 the remainder of his collection, consisting of some 1,100 drawings, came under the hammer on four different occasions and was dispersed over the entire world. The Fondation Custodia was acting in the spirit of Lugt, who like Van Regteren Altena was particularly fond of drawings by artists who had worked in Italy, when it bought Entrance of the Grotta di Posillipo near Naples in 2016. MR