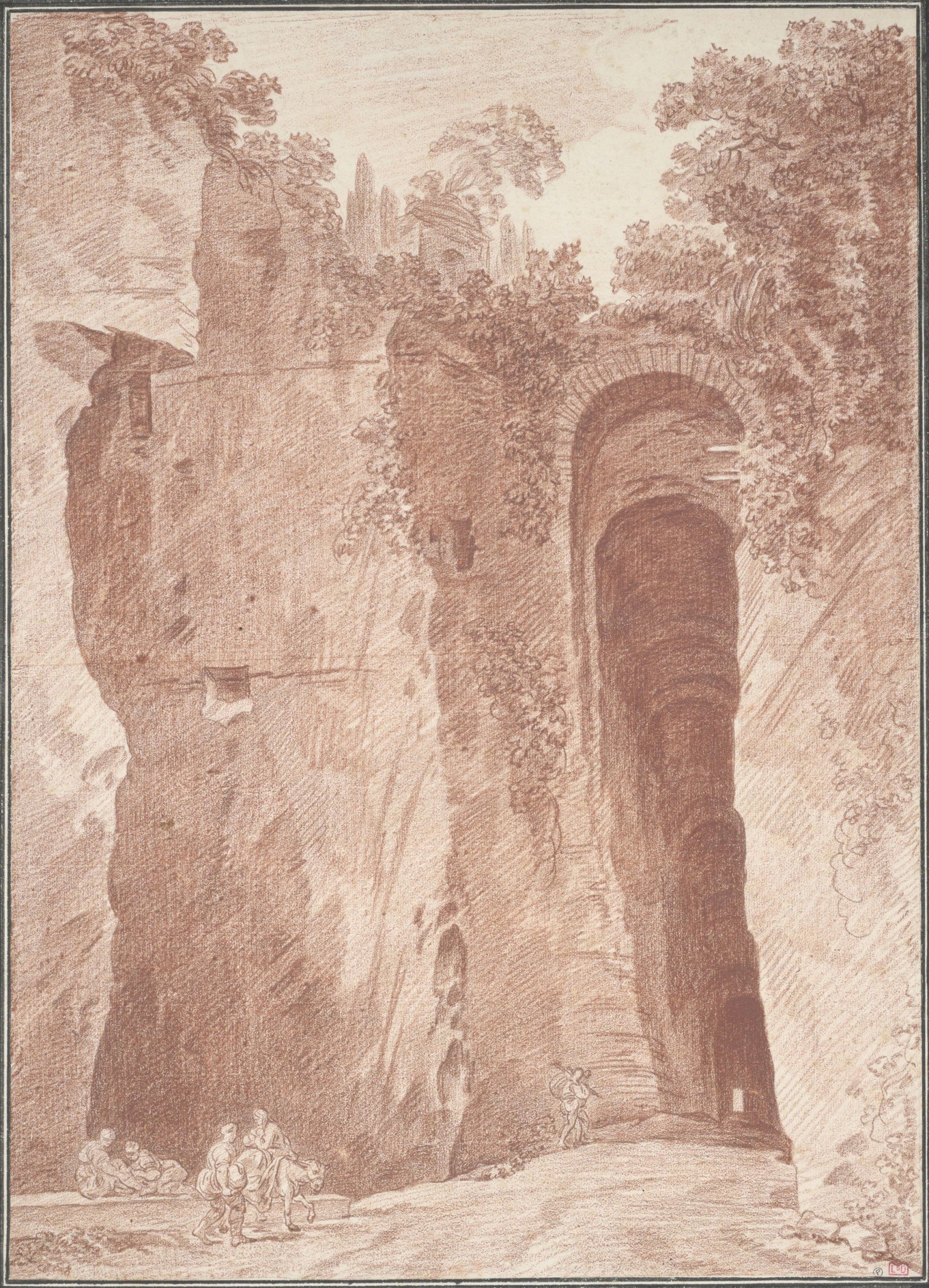 The grotto of Posillipo is an artificial tunnel, cut out of the homonymous hill between Naples and Pozzuoli on orders from the emperor Augustus. A motif as fascinating as it is inspiring, the site was considered – at least since the seventeenth century (see cat. no. 83) – a must-see for any traveller or artist performing the Grand Tour. Suvée, a native of Bruges, awarded the Grand Prix de Rome in 1771, was one of them. It was in 1775, during an excursion in Campania, that he came upon this antique vestige, and immortalised it working from life, in red chalk.1

Carved directly out of the rock, the entrance to the tunnel, seen here on the Naples side – the most frequently depicted – is off-centred to the right of the sheet, allowing the artist to describe the sheer wall bordering the passage on the left side. The distant tunnel opening, a tiny rectangle of untouched paper, shows the scale of the grotto, thereby dizzyingly shortening the 705-metres length. With broad strokes of hatching, modulating their orientation and density, Suvée sculpts the volumes of the rock walls into facets. The succession of planes is made legible by the effects of back-light that also underscore the graphic dimension of the cliffs’ sharp outline. The figure on foot at the tunnel entrance, poised to face the grotto’s oppressive darkness, adds a dramatic intensity to the scene. By depicting the site in this way, Suvée steeped it entirely in the near-esoteric mood that has continued to characterise it over the centuries. In keeping with the traditional late eighteenth-century artistic mindset, our sheet is also laden with the typical aesthetics of the sublime landscape, which the artist distilled by playing on powerful vertical lines to organise his composition and the lowered point of view. Above the entrance to the tunnel lies the presumed tomb of Virgil, also depicted by Suvée during his Neapolitan sojourn.2

It was under the directorship of Carlos Van Hasselt that the first drawing by Suvée, done the same year as our sheet, entered the Fondation Custodia collections.3 The 2010 acquisition of this red chalk, moreover enhanced by a prestigious provenance, contributes to the prominence of landscape in the collection of eighteenth-century French drawings. MNG