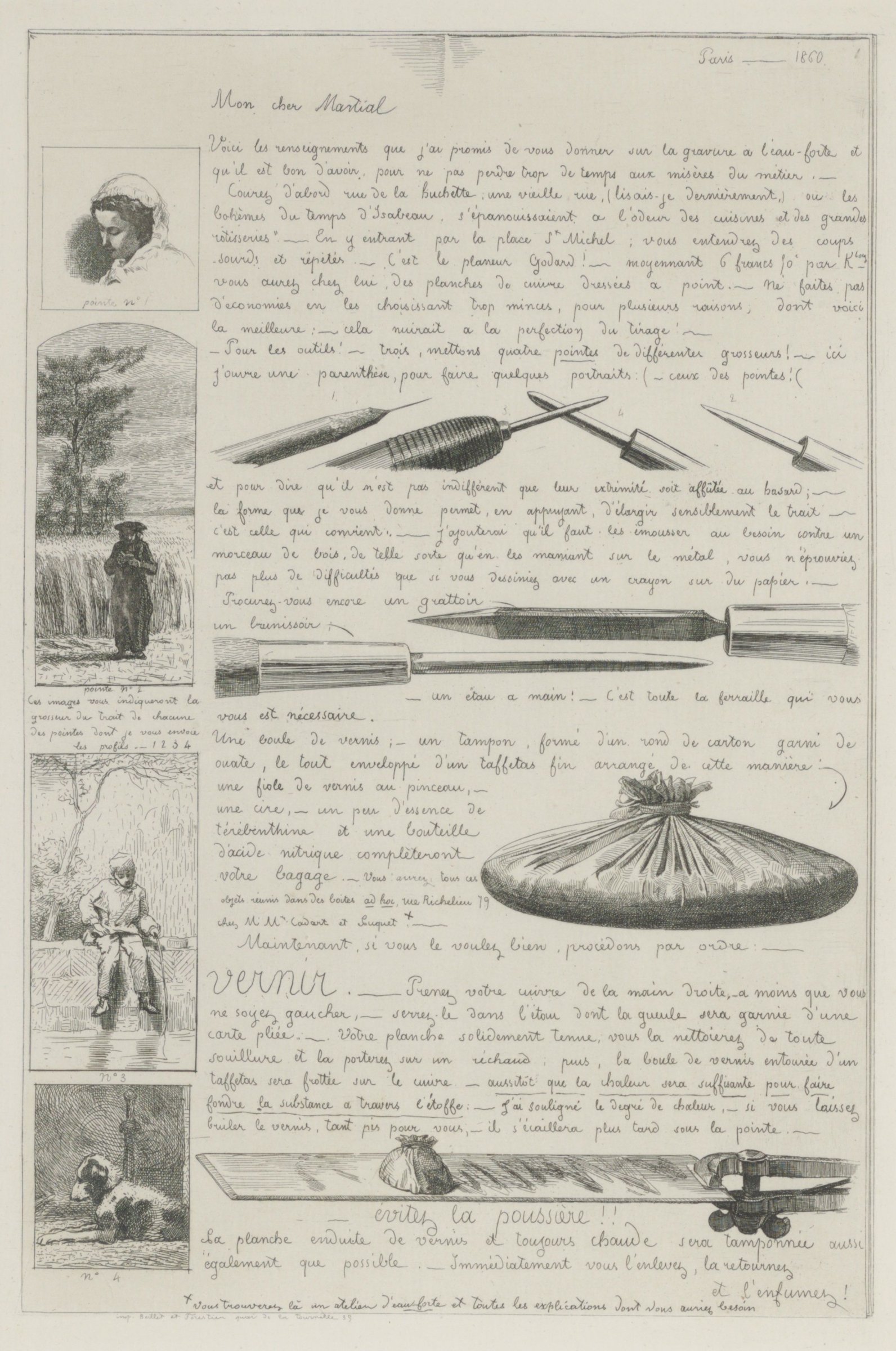 The name of the artist Martial Potémont, a pupil of Léon Cogniet (1794-1880) (see cat. no. 13and 14), is still associated with the nostalgic idea of the Paris of yesteryear. It is a vision he contributed to shaping, in particular with a series of 300 etchings titled L’Ancien Paris, published in 1864. He was also, along with Charles Meryon (1821-1868), one of the most celebrated engravers of the French capital and linked to the renewal of etching in France.

In 2010, the Fondation Custodia acquired the complete – and very rare1 – series of his Letter on the Elements of Etching, consisting of four prints and a title page. Choosing the manner of the illustrated letter, he offered a concise treatise enabling any amateur artist to quickly master the rudiments of etching, from choosing tools to printing proofs. Potémont’s use of the epistolary style is far from an exception in his engraved corpus; Henri Béraldi mentions eight other examples.2 To present his ideas the artist applied a rhetoric device, well-known since the eighteenth century, giving it a slightly parodic dimension here. Indeed, the text of the letter is certainly not devoid of humour, addressed as it is to “My dear Martial” – rather than to an imaginary correspondent, often anonymous, as in the preceding century – from “A. Potémont”. The artist introduces a dual identity, becoming at once both the addressee and the author of the text.

The frontispiece reproduces in trompe-l’œil an unfolded letter, dated June 1864, and its envelope with the stamp-date of the post and this inscription: “Letter on the elements / of etching / by A. Potémont / care of Messieurs Cadart and Luquet / rue Richelieu 79”. The etcher carried realism so far as to reproduce the print-maker’s stamp in the upper left of the letter, in a light grey tone. This title-plate, much smaller than the rest of the series, is in itself a manifesto of the art of engraving. Here Potémont illustrated the capacity of etching to imitate reality, provided it is correctly applied: shades of greys or intense blacks obtained according to the biting time, narrow parallel cuts to create reliefs – the folds of the sheet, its dog-eared corners –, cross-hatchings to mark shadows, extreme precision of the drawing that even succeeds in reproducing the perforations of the stamp. It is, therefore, an authentic programme outlining the advantages to be drawn from the lesson developed in this Letter. However, it should also be seen as a tribute to the Parisian world of etching: the Cadart and Luquet firm, to which the letter is addressed, was not only an art gallery and a publisher of prints, but also the premises of the Société Générale des Aquafortistes (1862-1867), of which Potémont was one of the founding members – alongside with Félix Bracquemond and Édouard Manet (see cat. no. 55) –, and where engravers could be supplied with materials. MNG