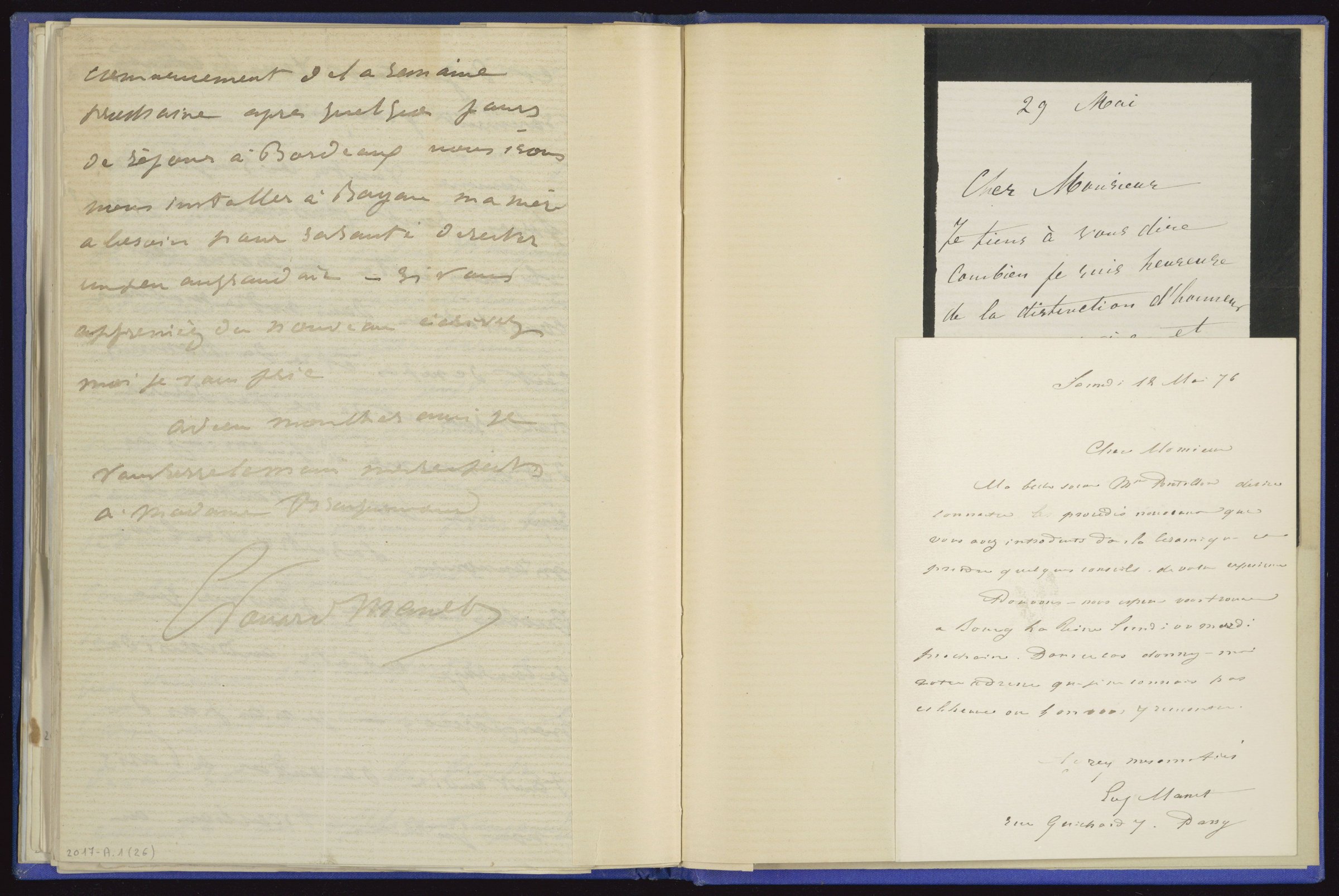 Until this correspondence surfaced at a sale in Paris in June 2016, its existence was known only through the publication of nine of the letters in Le Figaro of 29 September 1923 (reissued, with a critical commentary, by Jean-Paul Bouillon in 1983). The correspondence proved, however, to be much more extensive than that. It actually runs to forty-three letters and notes, bound – in no particular order – in a small volume, presumably on the instructions of a collector. This intervention must date from 1937 (the year the binder died) or before.1 For the most part, the letters are brief messages and appointments, very few of them dated, which attest intensive contacts between the two artists over two decades.

Manet et Félix Bracquemond (1833-1914) probably met around 1860, at a time when the latter was beginning to take an interest in the potential of printmaking for disseminating his work. In 1862, with Bracquemond’s help, Manet published his first set of etchings under the title 8 Gravures à l’eau-forte par Édouard Manet.2 Bracquemond, himself a keen etcher, certainly encouraged his friend’s interest in etching and without doubt helped Manet to master the technique, particularly with advice on biting and printing – subjects that are often discussed in the letters.3

The advantages of the etching technique were strongly propagated by Charles Baudelaire (1821-1867), because of its more spontaneous character when compared to traditional engraving with the burin. It had just come back into fashion among artists and art lovers – and before long among the public, at large thanks to the activities of the new Société des Aquafortistes. In May of that year, Manet and Bracquemond were among the founding members of the society. In the first of its monthly editions (which were always five etchings) the first and the fourth prints were by Bracquemond and Manet respectively.4 The following year, in October 1863, Manet supplied his second and last etching for the Société, after his portrait of the dancer Lola de Valence.5

Many of the letters in the recently discovered volume relate to appointments in his studio or at artists’ cafés like Café de Bade and Le Guerbois, or invitations to dine with him and his wife or at his mother’s. Three of them, maybe the earliest among the series, concern the pastel portrait of Manet which Bracquemond exhibited at the Salon in 1864.6 From July of the same year dates a letter written during the artist’s stay at Boulogne, in which he relates his visit to the Kearsarge, the american ship anchored off the shore after the sea battle immortalized by Manet just before.7 The strong bond between the two friends emerges perhaps most clearly from the two longer letters in which Manet, writing from Arcachon – where, awaiting the end of the Commune, he tried to recover from the privations he suffered during the Siege of Paris in 1870 – poured his heart out to Bracquemond about the country’s political situation.8 In 1880 Manet, already ill and taking a lengthy course of treatment at Bellevue to the south of Paris, sent Bracquemond two of his now famous letters adorned with delicate watercolour sketches – missives that were, regrettably, separated from his other letters to the engraver at an early stage.9

At the end of the album a letter by the artist’s brother, Eugène Manet (1833-1892), from 1876 has been bound, asking Bracquemond’s advice on ceramic processes for his sister-in-law, Yves Pontillon, née Morisot (1838-1893), as well as Suzanne Manet’s (1830-1906), the artist’s widow, congratulations with a decoration, maybe Bracquemond’s nomination as officier de la légion d’honneur in 1889.10

1A new, critical edition of the correspondence is actually being prepared by Jean-Paul Bouillon.