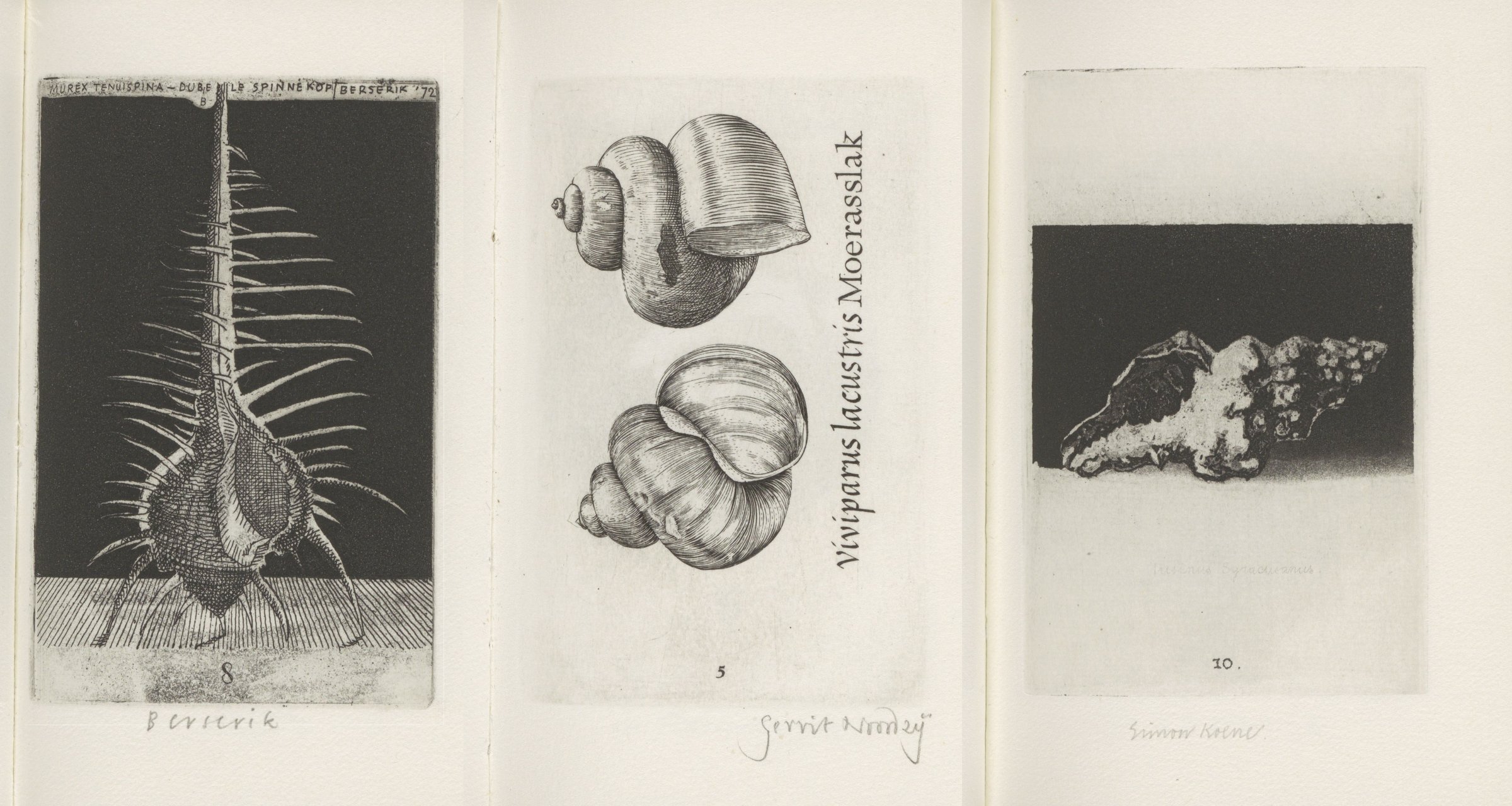 Rembrandt’s etching of a Conus Marmoreus, dated 1650, has inspired generations of printmakers right down to the late twentieth century. Yet the artist himself was not the first to make an etching of a single shell, exactly life-size. His imagination was doubtlessly fired by the unusual etched series of shells by the Prague-born painter, draughtsman and printmaker Wenceslaus Hollar (1607-1677).1 In this series of thirty-eight sheets, the minutely observed objects are all rendered against a white background, creating a powerful, sometimes alienating image. Rembrandt achieved a similar effect in the first state of his etching, of which only five impressions are known.2 In the second state, an impression of which was acquired by Frits Lugt in 1923, he darkened the image by filling the surroundings with a dense network of hatching.3

The very small Essai pour un hommage à Rembrandt (see cat. no. 58) by the Swiss artist Gérard de Palézieux is a variation on this second state, printed on chine-collé, whereby a very thin piece of paper was laid down on a heavier support before printing (see cat. no. 58). This technique allowed the artist to make a rich impression, showing all the fine lines and the cobweb-like hatching on the shell. Although the artist did not entirely succeed in conveying the daunting perspective in Rembrandt’s etching, Palézieux positioned the object in space by having it cast a shadow and by indicating the background with hatching. He did not, however, make the same mistake as Rembrandt and depicted the image on the copper plate in reverse, making sure his print is a truthful representation of nature and the shell coils in a clockwise direction.

The Austrian draughtsman and printmaker Jakob Demus chose Rembrandt’s first state as his starting point, depicting the same shell, recognizable by its distinctive marbled surface, against a white background, but in an upward position (see cat. no. 22). Being one of the first artists to use diamond-drypoint in a systematic way, Demus worked directly onto the copperplate in this technique.4 Unlike a normal drypoint, the sharpened diamond shears smoothly through the copper, allowing the artist to make extremely precise, almost photographical images. However, it has to be handled with the greatest care, because the hard, yet brittle tip easily breaks. Two Rembrandt Shells clearly demonstrates the artist’s virtuosity of this difficult technique. With very fine lines he skillfully rendered the complex twisted shape and the decorative pattern of the two shells. It reflects Demus’ intense admiration for Rembrandt, who also practiced the technique of etching on the highest level.

Different in style and execution, but also indebted to Rembrandt’s etching is the little booklet with twenty prints of various types of shells, published under the name Schelpen (“Shells”) in 1972 (see cat. no. 51). Inspired by David Hockney’s Six Fairy Tales (1970), the Dutch artist and publicist Simon Koene asked his printmaker friends, including Dirk van Gelder, Charles Donker, Willem Minderman, Hermanus Berserik, Jaap Hillenius, Co Westerik, Gerrit Noordzij, Arja van den Berg and Fred Couprie, to contribute to this initiative with an etching or engraving of a shell.5 In retrospect, this collaboration was the beginning of De Haagse Etsclub, an artists’ society in the tradition of the nineteenth-century Société des aquafortistes that kept Rembrandt’s tradition of making small etchings from nature alive. Thanks to the gift of the Amsterdam print-lover Bauke Marinus, all the yearly series published by this group of artists are now in the Fondation Custodia. MR

Bauke Marinus, Amsterdam; by whom donated to the Fondation Custodia, together with all the other publications of De Haagse Etsclub, 2017 (inv. no. 2017-P.35)