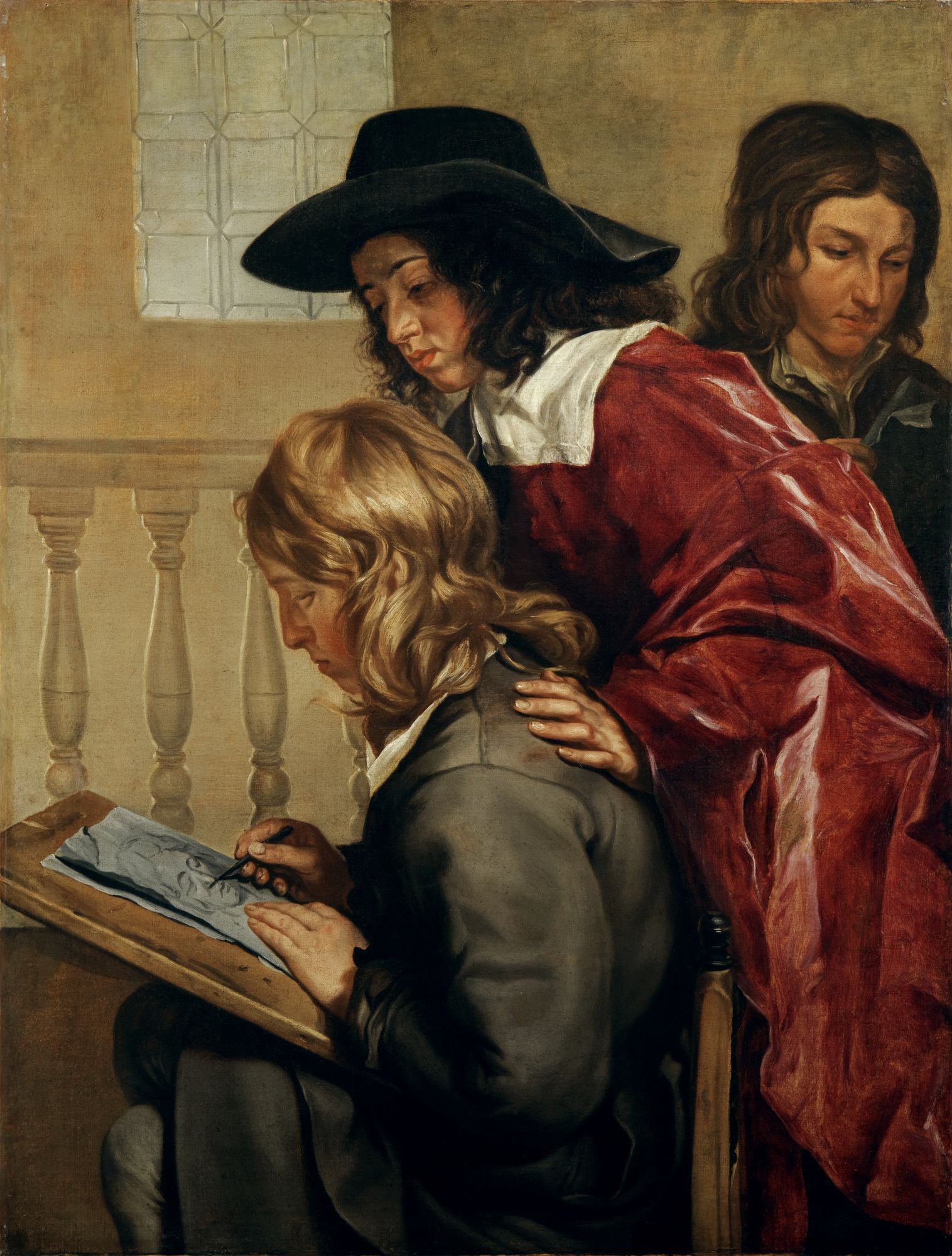 A young man aged about fourteen or fifteen is concentrating on the drawing that he is doing in black chalk on a sheet of blue paper. This is approximately the age when apprentices in the seventeenth century would enter a painter’s studio; there they would take instruction from the painter before becoming – if they were talented enough and if the size of the studio permitted – his assistants. Before learning to paint, however, they learned to draw. Since the sixteenth century, drawing had been considered the essential basis of the profession, the ‘Father of Painting, Architecture and Sculpture’, as Giorgio Vasari wrote in his Lives of the Artists. In fact, in some large studios, including that of Rembrandt (see cat. 38), a number of apprentices came solely to learn to draw, without learning to paint. They were either future artisans such as goldsmiths, whose trade leaned heavily on drawing, or young people of good family whose parents wished them to master this elegant and useful skill, especially for military careers.1

The space in which our young draughtsman and his two acolytes are working does not at first sight look like the kind of studio with which we are familiar from the numerous representations, often partially fictitious it is true, left to us by the painters of the seventeenth century. The balustrade, bathed in golden light, suggests the presence of a fine staircase such as one might imagine in a vast building. Are we in the spacious studio of a successful painter, or in the home of a collector, one of whose sculptures is being drawn by the fair boy?2 The young man in red does not look much older than our draughtsman, but his hat and his protective, encouraging stance – hand on shoulder, gaze fixed on the boy’s work – suggest that he may be his master or at least his superior in the studio.

When the painting came up in the sale room in London in 1957 it was attributed to Wallerant Vaillant (1632-1677), an artist from Lille, who enjoyed a successful international career, particularly in the Netherlands and the German-speaking countries. An excellent portrait painter, Vaillant also depicted and engraved in mezzotint a large number of young draughtsmen (see cat. 43). This is no doubt why the painting was attributed to him in 1957; nevertheless Frits Lugt, in his copy of the catalogue of the sale where he acquired the painting, placed a question mark beside the name of the artist and proposed the name of Jacob van Oost the Elder (1603-1671) instead. In 1666, this artist from Bruges painted the interior of a studio with three boys drawing from sculptures.3 Although this painting shows a very different setting than the painting in the Fondation Custodia, there are technical similarities which lend some credence to this attribution, in particular the contrast between the heightened treatment of the fabrics and the softer handling of the other parts of the composition.

Also attributed to Jacob van Oost the Elder are several portraits of children or young people with slightly melancholy expressions, comparable to the expression of these three young men.4 For example, the Young Man Writing in the Musée des beaux-arts, Nantes5 and the Two Boys Blowing Soap Bubbles now in Seattle (Art Museum).6 The latter has however recently been attributed to Michaelina Wautier.7 A deserved change of circumstances, as many paintings by this female painter were in the past ascribed to Jacob van Oost the Elder.8 A second version of the painting – smaller and less impressive – is also known.9 It bears some similarities with the painting belonging to the Fondation Custodia: curious white highlights to lighten the red fabric and a somewhat harsh treatment of the faces, also to be found on the two young men on the right in the Paris painting.10 Katlijne Van der Stighelen, to whom we owe the recent monographic exhibition devoted to the artist, confirmed that our canvas may very well have been painted in the studio of Michaelina Wautier.

1See for example: Punam Madhok, The Drawing books of Henry Peacham and Jan de Bisschop and the place of drawing in the education of a Renaissance gentleman, doctoral thesis, University of Illinois, 1993, Ann Arbor, 2004, passim.

2Drawing from sculpture was one of the steps in the curriculum for sculptors’ apprentices. See in particular G. Bleeke-Byrne, ‘The Education of the Painter in the Workshop’, in Children of Mercury. The Education of Artists in the Sixteenth and Seventeenth Centuries, exh. cat., Providence (RI), Brown University, List Art Center, 1984, pp. 28-39, p. 35.

3Bruges, Groeningemuseum, oil on canvas, 122 × 98 cm, inv. no. 0.188. In his monograph on the artist, Jean-Luc Meulemeester attributed this painting to Jacob van Oost the Younger: op. cit., p. 403, no. D13. Hans Vlieghe, in his catalogue raisonné of the paintings in the Groeningemuseum, attributed the painting – correctly in our opinion – to Jan van Oost the Elder; Hans Vlieghe, Stedelijke Musea Brugge. Catalogus schilderijen 17de en 18de eeuw, Bruges, 1994, p. 197, ill.

4Jean-Luc Meulemeester, Jacob van Oost de oudere en het zeventiende eeuwse Brugge, 1984, nos. A22, B69, B70, B75 (for no. B69 see also: https://www.nationalgallery.org.uk/paintings/probably-by-jacob-van-oost-the-elder-two-boys-before-an-easel).

10This technical weakness, which contrasts with the fine execution of the profile of the young man drawing, could be due to the painting’s state of conservation. Recent restoration revealed large tears in the canvas which had been covered and repainted when the work was relined, probably in the mid twentieth century.