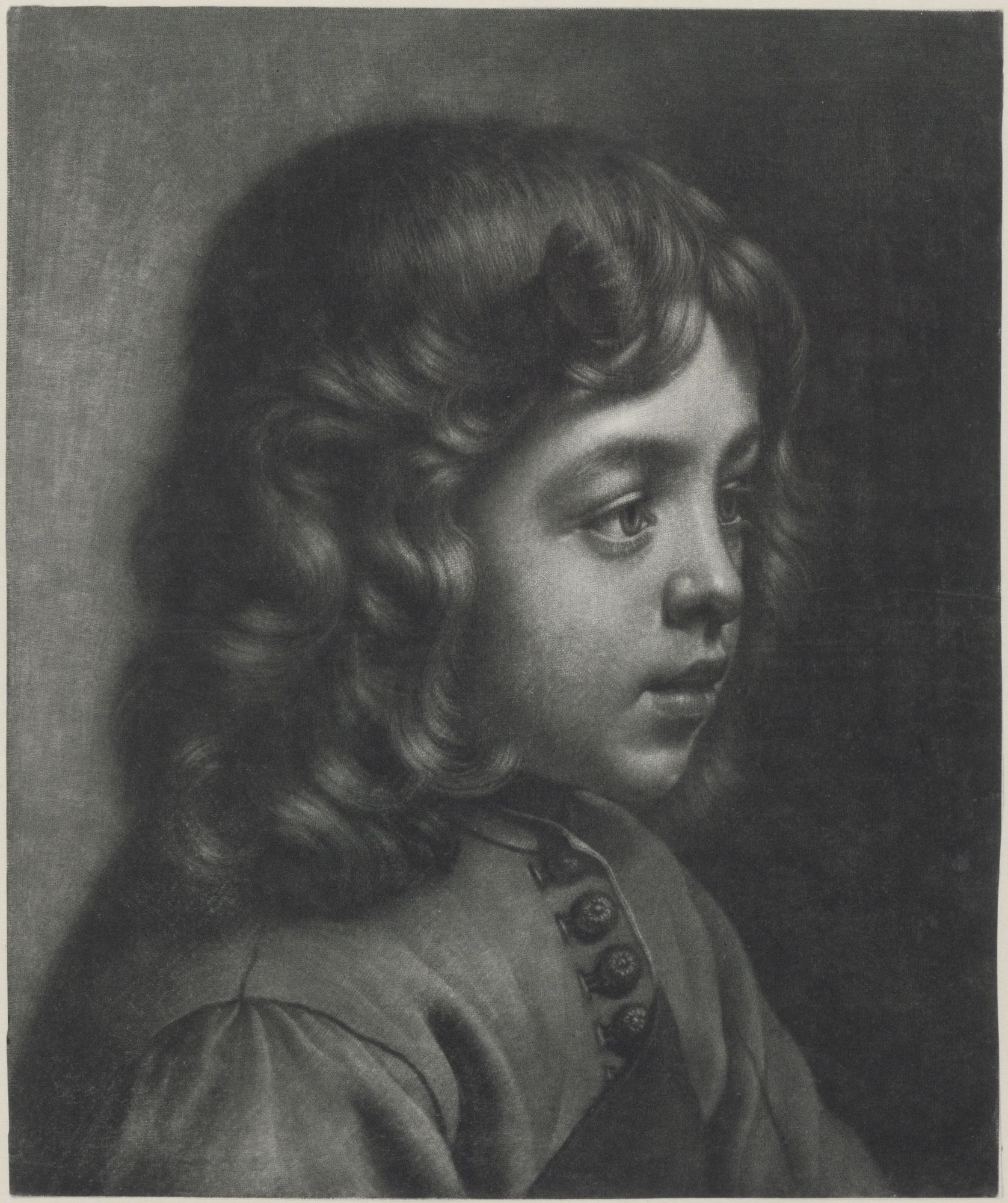 With this head of a boy in mezzotint, Wallerant Vaillant seems to have wanted to compete with a painted portrait. Not only is the boy rendered practically life-size, the modelling of the face in black and white has an almost painterly refinement. Using the new graphic technique of his time, the artist achieved the transitions of grey hues, in the cheeks, for instance, the deep black of the curls – as opposed to the topmost wisps of hair that catch the light – and the velvety texture of the background.1 We can still understand exactly why Joachim von Sandrart (1606-1688) described Vaillant as the practitioner of the mezzotint (Schwarze Kunst) ‘par excellence’ in his Teutsche Academie (1675) and emphasized that his prints were extremely popular.2

We know of more than two hundred mezzotints by Vaillant, most of them created in Amsterdam in the 1670’s. Some years before that, Vaillant had encountered this technique thanks to Prince Rupert of the Rhine (1619-1682).3 He used existing compositions by such artists as Adriaen Brouwer (1605/06-1638), Anthony van Dyck (1599-1641), Gerard van Zijl (1607/08-1665) and Titian (c. 1488-1576) for the majority of his prints, which cover a wide range of genres. When he worked from his own designs, Vaillant’s subjects were more limited; images of young boys predominate. The similarities to the work of Michael Sweerts (1618-1664), where boys were often lovingly portrayed and the figure of the artist’s apprentice regularly appears, are striking. On one occasion Vaillant reproduced a painting by Sweerts of a young artist who is drawing a plaster bust.4 Vaillant continued with this theme in mezzotints such as Boy Seated in a Studio (Hollstein no. 98), the Young Artist at Work (Hollstein no. 102) and Boy Reading a Book (Hollstein no. 99).

The print of this small boy – also after Vaillant’s own design – is close to the aforementioned group, but those boys are shown in action. This young lad hardly seems to be posing and his averted gaze suggests that his attention is drawn to something lying outside the picture plane. As viewers we can feel the proximity of the artist to his model. The curly-haired boy is too young to have been Wallerant Vaillant’s half-brother Andries or André Vaillant, who in 1670, at the age of fifteen, was his apprentice in Amsterdam and repeatedly served as his model.5

1Ludwig von Siegen made his first mezzotint in 1642 and he is commonly described as the technique’s inventor.

3The first mezzotint by Prince Rupert was published in Frankfurt in 1657 and probably very soon afterwards he started his ‘collaboration’ with Vaillant, who went to Paris in 1659; see Gerdien Wuestman, “The Mezzotint in Holland: ‘easily learned, neat and convenient’”, Simiolus 23 (1995), pp. 63-89.

4Hollstein no. 97; The painting by Michael Sweerts is in the Minneapolis Institute of Arts, inv. no. 72.65. It is unlikely that Vaillant and Sweerts knew one another. The two artists were never active in the same town.