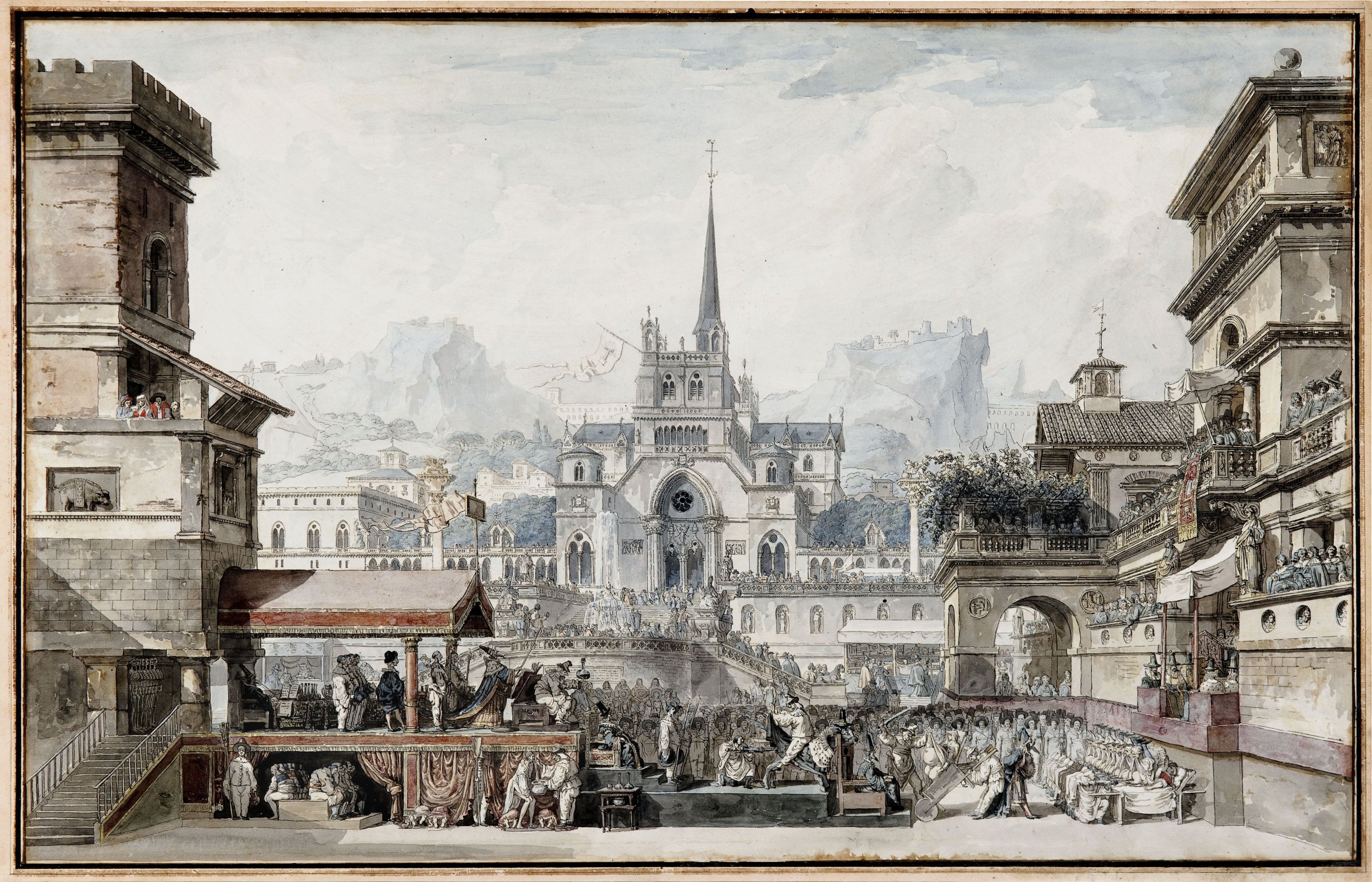 These two monumental prints by the French architect, painter and stage designer Louis Jean Desprez were probably designed as pendants, mocking both Catholic religion and medicine.1 Indulgences plénières (see cat. no. 24) is a satirical allusion to the Catholic ritual of indulgence, which has been criticized since the Reformation. In the foreground, a hooded cleric with two turkeys in his hands is carried aloft by other clerics. The scene represents a parody of the Easter procession, during which a statue of a saint is carried through the streets on Good Friday. On the staircase, leading up to a church, penitents are blessed or flagellated, while others undergo the suffering of Christ by carrying his cross. The whole situation is ridiculed by the ass in the foreground, which seems to be rolling on the floor with laughter.

Promotion médicale (see cat. no. 25) pokes fun at doctors and their faith in the blessings of the clyster syringe, a medical instrument primarily used for bowel cleansing. Up until the nineteenth century, purgative clysters were frequently prescribed to ease a wide variety of ailments, from stomach aches to constipation. It was also a treatment that was widely associated with quackery and often mocked in theatre, for instance in Molière’s Le Malade imaginaire (1673). Desprez, however, took this theme to another level entirely. The print depicts a bizarre ceremony being held in a town surrounded by tall buildings and a gothic-looking church. Standing on an elevated platform in front of his lectern, the Commedia dell’arte character Pantalon outlines the benefits of the clyster syringe to the assembled townspeople. One of his patients is Pulcinella, seated on a close stool holding a flask whose contents are smoking. To the right, an ass and a large group of patients, lying on their backs with their bare buttocks up, are being “threatened”.

Desprez made these prints in Stockholm, where he spent the last twenty years of his life, working for King Gustav III of Sweden (reg. 1771-1792). The latter had spotted the artist’s talent in Rome, where he worked with Francesco Piranesi (1758-1810) and made designs for the famous Voyage pittoresque, ou description des royaumes de Naples et Sicile by Jean-Claude Richard de Saint-Non (1727-1791). Having trained as an architect at the Académie Royale d’Architecture in Paris, Desprez excelled in Roman views with ruins and monuments, cityscapes and church interiors, which he often populated with colourful crowds. Indulgences plénières and Promotion médicale, which the artist hand-coloured himself, represent a rather special category in the oeuvre of the artist. They must have appealed to a small group of admirers, who – like Desprez – were representatives of the Enlightenment and did not flinch at the sight of some blasphemous images or bare buttocks. MR