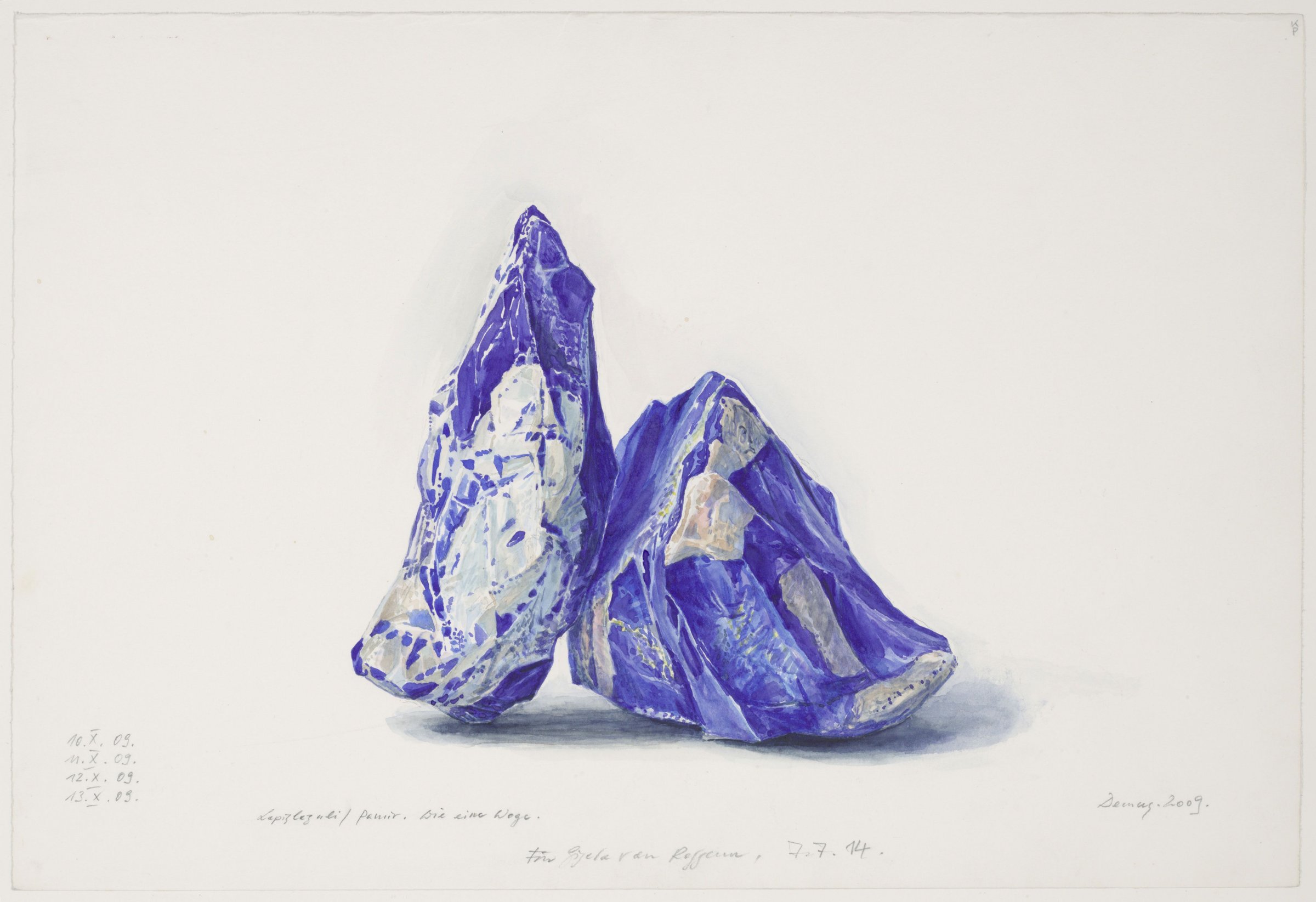 The graphic work of the Viennese Jakob Demus is unquestionably among the most original of his generation. Having discovered the etching technique when he was just sixteen, he taught himself the rudiments of the process, immersing himself in the study of the Old Masters. After being rejected from the graphic department of the Fine Arts Academy in Vienna, he enrolled in the sculpture course in 1977. However, as soon as he was awarded his diploma in 1984,1 he resumed his engraving work, adopting a technique – diamond dry-point – that soon became his signature and which he is still alone in practicing at this level of excellence.2

This special dry-point, which bears at its tip a sharpened diamond, has been traditionally utilised by engravers to heighten shadows, or else work on drawing details requiring great precision. It was occasionally applied by Lovis Corinth (1858-1925) for experiments,3 but Demus has made it his favourite tool. Indeed, it allows the artist to gently incise the copper – the hardness of the diamond defying the material’s intrinsic resistance. The tracing, thus preserving the drawing’s spontaneity and fluidity, is characterised by an incomparable delicacy. However, mastering the tool requires a very special skill: the point responds to the slightest inflection or variation of pressure, and the tiniest blunder is sufficient to break it4. As well as that, like plates engraved with the traditional dry-point, the diamond dry-point only allows a small number of impressions – about thirty at the most – , as the burr wears off at each passage under the press.5 These challenges make Demus’ prints – usually done without a preliminary drawing – all the more remarkable.

The wren’s nest etched by the artist in 1989 is one of his masterpieces (see cat. no. 21). Demus utilises the diamond’s properties to detail with the utmost precision the structure of the object and the way it interacts with light. He was thus able to make the tangle of blades of grass palpable,6 performing a mental exercise, deconstructing the form to analyse it with greater accuracy and render it in his drawing. The vibrant, velvety aspect of the line gives a touching fragility to this nest, which also plays a special role in the artist’s personal mythology. He discovered it, in fact, in a pine tree during a stroll, and received it as a treasure to be passed on. Later, he offered it to his bride as a wedding gift. As proof of his special feeling towards it, Demus engraved it twice the same year, with a diamond dry-point, only shifting the viewpoint.7

The other treasures of nature that Demus collects include many stones, of which he made several engraved “portraits”.8 He is the first engraver who already by 1986 began to be interested in this subject as an end in itself,9 the diamond providing him with a range of graphic effects capable of describing with a near-photographic objectivity the surface of each stone.10 In this way he produced a print, in 1989, representing a section of lapis-lazuli,11 overcoming the challenge of transcribing the physical characteristics of this mineral in spite of the absence of its intense blue colour. Twenty years later, Demus came back to the subject, this time in watercolour see cat. no. 20). As often in his prints, he depicted here a couple of stones placed on a neutral background, materialised solely by a cast shadow. Resting one against the other in a delicate balance, it is as though the stones have been endowed by Demus with a personality of their own. Using the tip of the brush, he detailed the minerals’ facets and the variations of the colours, liberally playing with the spared paper to suggest the white veins of calcite, ochre strokes marking the pyrites inclusions. In the inscription under the drawing he indicated the provenance of the stones – the region of Pamir – as well as the addressee of his drawing – Gisela van Rossum –, once again placing himself in a relationship of transmission.

These two works of Demus are gifts that the Fondation Custodia received from cherished persons, Peter Schatborn and Gisela van Rossum, respectively Emeritus Director of the Rijksprentenkabinet and former restorer of art on paper at the Rijksmuseum. MNG

1Ed de Heer (ed.), Jakob Demus, The Complete Graphic Work 1983-2005, Amsterdam 2005, p. 221. This catalogue raisonné was published on the occasion of the retrospective offered to Jakob Demus by the Museum Het Rembrandthuis of Amsterdam in 2005.

2Moreover, Demus sees a shared spirit between the gesture of the engraver, cutting subtle reliefs in the plate, and that of the sculptor. For him the two techniques belong to a same play with shadow and light; see ibid., p. 6.