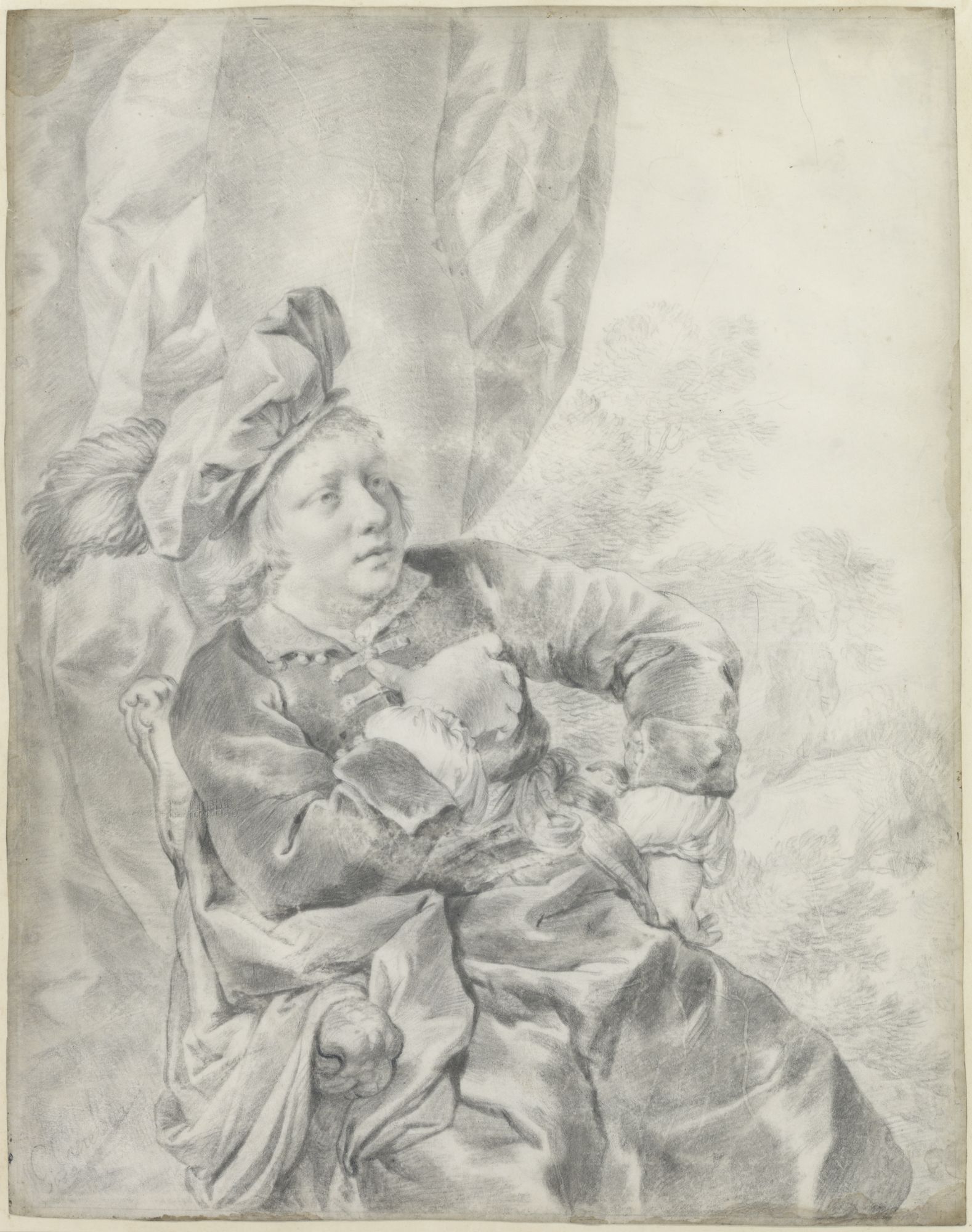 The pendant to this sheet, in which a woman lays pearls in a box, is still missing. Frits Lugt owned both drawings, but they were stolen during the Second World War. Only this drawing of a young man was returned to the Fondation Custodia’s collection in 1954. Lugt bought the two drawings in 1937 as by Pieter Casteleyn (1618-1676), together with a third work by the artist which he sold on later.1 The initial letter of the signature, which was added lower left, was either overlooked by Lugt or misread as a P, and actually appears to be a C. So it would seem that the attribution to Pieter should be transferred to his brother Casper (or Jasper) Casteleyn (c. 1625 - after 1661).2

Pieter and Casper were members of the Mennonite Casteleyn family, who played an important role in the Haarlem book trade.3 Their father, Vincent Casteleyn (c. 1585-1658), founded one of the first Dutch newspapers and was succeeded as the town printer by his son, Abraham Casteleyn (c. 1628-1681), who acquired a great reputation with the Oprechte Haerlemsche Courant. He and his wife, Margarieta van Bancken (1628-1694), had their portraits painted by Jan de Braij (see cat. 12).4 Around 1650, Pieter embarked on the publication of a newspaper titled the Hollantsche Mercurius, besides which he was also active as an engraver and a painter. The maker of this drawing, Casper, focused primarily on painting, much like his other brothers Johannes (c. 1612 - after 1665) and Vincent II (1609-1649), who was a pupil of Frans Pietersz de Grebber (1573-1649).5 A member of Haarlem’s Guild of St Luke since 1653, Casper also spent some time in Amsterdam.6 In his Het gulden kabinet (1662), Cornelis de Bie described Casteleyn as “the one who was drawn to art from a young age”.7 De Bie does not mention whether his works were mainly history paintings, such as The Meeting of Granida and Daifilo (1653)8 and Minerva Visits a Young Man in Prison (1659),9 or whether he also made portraits.

The young man in the drawing has no name. The fact that his portrait was drawn on parchment, coupled with the fine finish in black chalk, suggests that it was not followed by a painted version. Without the pendant it is difficult to work out the function of this drawing, but the pair were probably made on the occasion of the couple’s marriage or engagement. The pearls, which according to the literature the young woman was placing in a box – symbolizing her virtue and purity – could also point to this.10 There does not seem to be any symbolism in the portrait of the young man in the plumed beret.

1In 1942 Lugt sold the drawing to W. Wheeler & Son, London, but its present whereabouts are unknown.

2Some months after this purchase, Lugt bought a drawing attributed to Casper, showing that he did know of the artist’s existence: Title Page with a Portrait of Camphuysen, Fondation Custodia, Paris, inv. no. 5272.

4Rijksmuseum, Amsterdam, inv. no. SK-A-3280; the preliminary study for his painting is in the Fondation Custodia, Paris, inv. no. 5124.