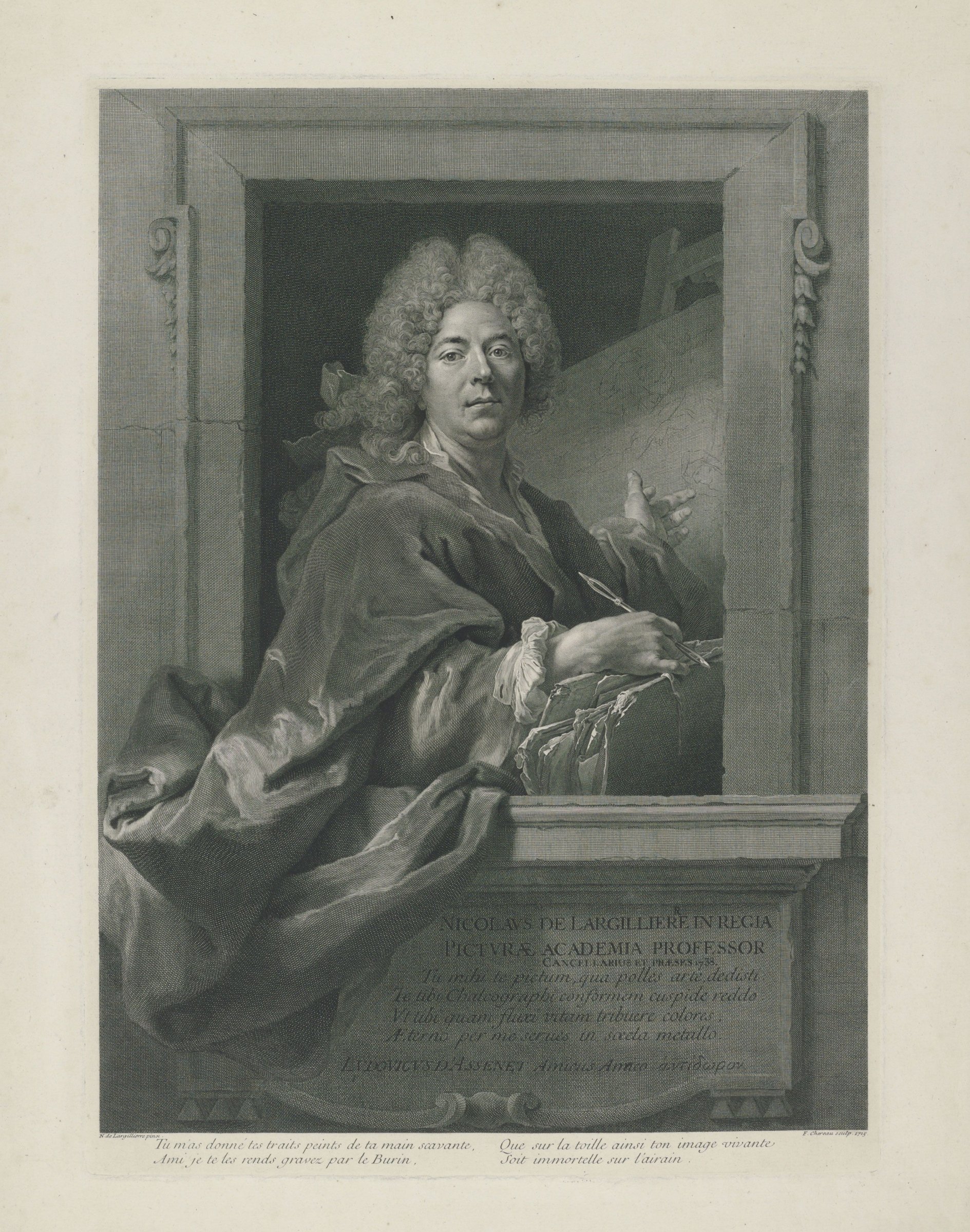 In 1949 Frits Lugt bought a superb trompe l’oeil painting of two bunches of grapes nailed to a wall by the French Baroque painter Nicolas de Largillière (1656-1746).1 It is a unique work in the artist’s oeuvre, who is known chiefly today for his successful career as a portraitist. Largillière, though, was a peintre universel who also painted still lifes, landscapes and a few history scenes. The range of his oeuvre can be explained by his international training. He was first apprenticed to the Antwerp landscapist and bamboccianto Antoon Goubau the Elder (1616-1698), and then went on to work in London for Peter Lely (1618-1680), the celebrated portrait painter at the court of Charles II (reg. 1660-1685). In 1679 he settled in Paris, where he was admitted to the Académie Royale three years later.

In order to give this famous artist a face in the collection the Fondation Custodia bought this portrait after a self-portrait that Largillière painted in 1711.2 It shows the 55-year-old artist in his studio, clad in an elegant cloak with a nonchalant display of the cuffs of his white shirt. His right hand, in which he has a holder containing a piece of graphite or chalk, rests on a portfolio of drawings. With his left hand he is pointing at a canvas bearing the sketched outlines of an Annunciation.

Largillière made this painting on commission for the Parisian art collector Louis d’Assenay, who had it and a painted self-portrait by Hyacinthe Rigaud (1659-1743) of c. 1710 hanging as companion pieces in his home in the rue des Fontaines.3 Like Largillière, Rigaud was a successful portraitist and worked at the court of Louis XIV (reg. 1648-1698). In a sense they were rivals, but they also respected each other. In an emotional account written by Hendrick van Hulst (1685-1754), Rigaud, three years the junior, declared that he did not wish to surpass Largillière but desired only to imitate and thus grow closer to him.4 Largillière, for his part, stood in awe of Rigaud as a painter.5

D’Assenay had reproductive prints made of the paintings.6 Largillière’s was engraved by François Chéreau the Elder, while Rigaud’s was done by Pierre Drevet (1663-1738). Both engravers placed their sitters in window embrasures, adding elegant draperies of their own design. Chéreau, a pupil of Drevet and a very accomplished engraver, provided a very convincing rendering of the velvet cloak and the powdery wig. He also copied the fall of light onto the cloak, the papers in the portfolio and the artist’s round face faithfully from the painting. MR