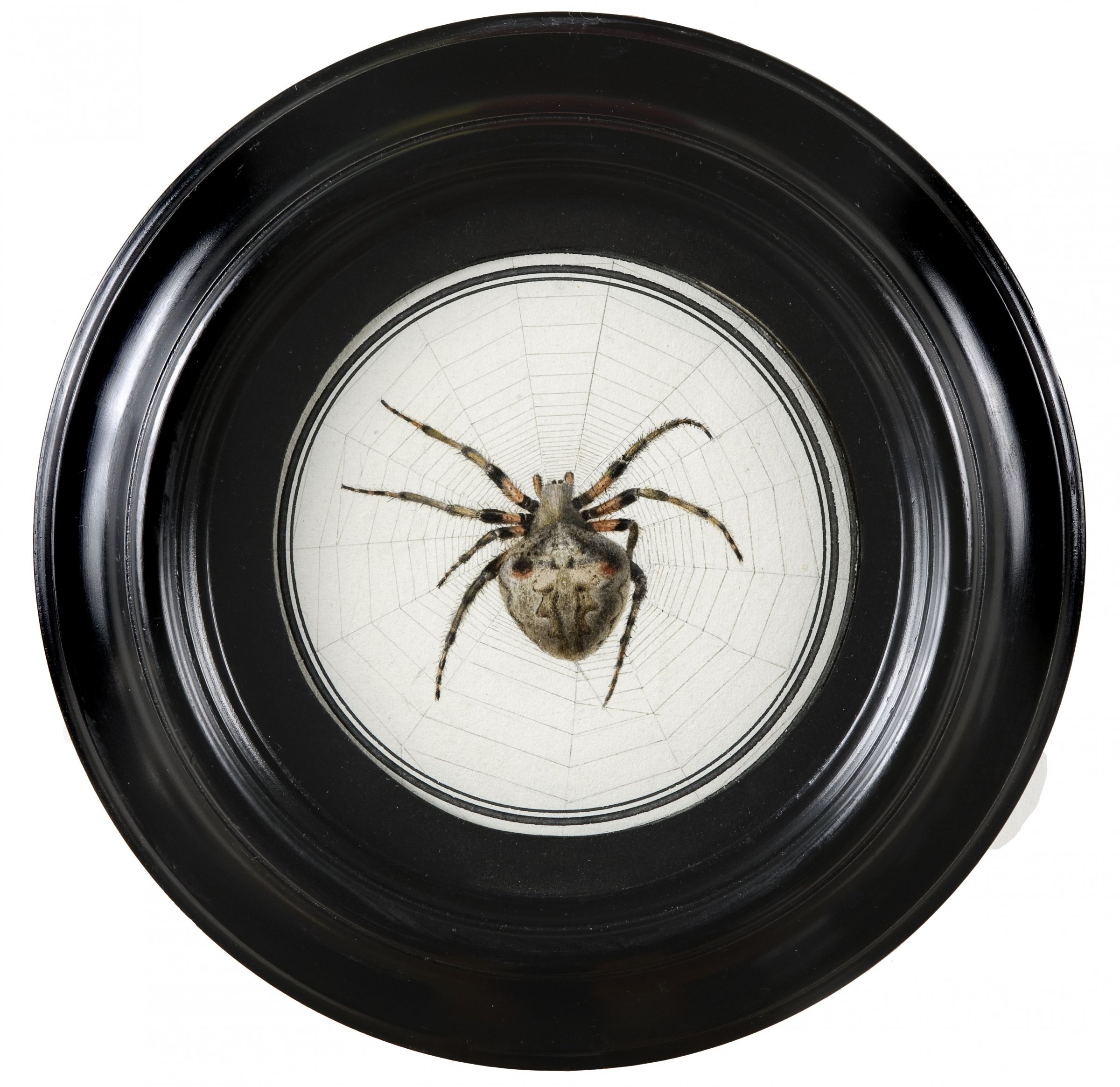 Frits Lugt was particularly fond of naturalist representations of plants and small animals, in which Golden Age Dutch artists, notably Jacques de Gheyn the Younger (1565-1629), became experts. Two centuries later, that legacy can be discerned in this watercolour, whose author is still unknown to us today. The anonymous artist, a proficient naturalist, represented a female diadem spider,1 recognisable by the wavy, cruciform patterns that adorn its dorsal abdomen. It was drawn life-size, or barely enlarged,2 in a round format that suggests a magnifying glass lens, producing an intriguing trompe l’oeil. The brush accurately described the variations in colour and texture on the animal’s body, as well as the expressive articulation of its legs. Moreover, the spider is shown in the process of weaving its web, using one of its rear legs to pull a silk thread produced at the base of its abdomen. With their spiral geometry, built on a weave formed of radii, the webs of diadem spiders are in fact characteristic of this species. The draughtsman detailed the threads with thin lines in pen and grey ink, using a ruler, rendering the diaphanous lightness of this structure, which the spider patiently rebuilds every day.

This watercolour, belonging to an old pictorial tradition3 – and owing its descriptive accuracy to the works of Carl von Linné (1707-1778) –, attains the stature of an authentic wonder, midway between art and science. In the nineteenth century, when science became institutionalised and scientific practices were beginning to be displayed in museums, these representations were chosen by private collectors for their aesthetic, rather than didactic, appeal.4 With its elegant ebony-style frame, this work doubtless occupied a choice position in a connoisseur’s cabinet.

Our naturalist study expands the already extremely rich collection held by the Fondation Custodia, which boasts among others a series of twenty-two drawings5 by Jacques de Gheyn the Younger, representing flowers, insects and other animals, an outstanding portfolio of drawings of tulips, shells and insects by Balthasar van der Ast (1593/94-1657),6 as well as an album of drawings of birds by Aert Schouman (1710-1792)7. MNG