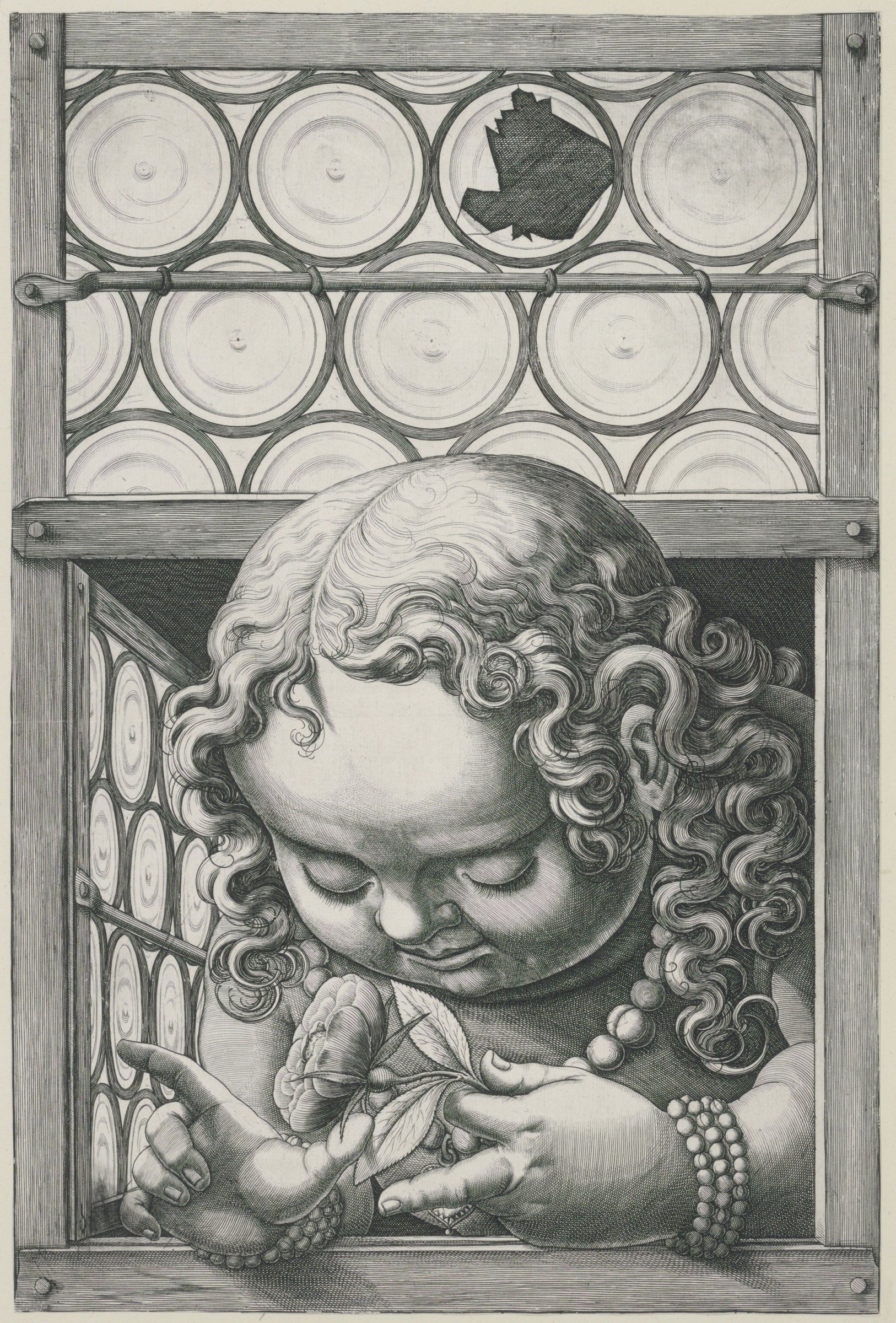 Many of the prints that were sold in the sixteenth and seventeenth centuries were meant to be hung on a wall.1 Set in a frame or simply pasted onto a wooden or textile support, they were inexpensive alternatives to paintings. This print, which is by an as yet unidentified artist, could have been used in the same way.2 The dizzying trompe l’oeil, which is heightened by the foreshortened perspective, is all the more convincing when the print is at a height. It is as if the child, probably a girl, is sticking her head out of the window and is on the point of raising her eyes to look at the viewer.

Trompe l’oeil has been a favourite device of artists since ancient times. They tried for centuries to deceive the eye by depicting reality as faithfully as possible so that the viewer is tricked for a fraction of a second into mistaking the scene for reality. Trompe l’oeil scenes with people looking out of a window are mainly found in Dutch painting of the seventeenth century by such famous artists as Gerrit van Honthorst, Jan Steen, Bartholomeus van der Helst and Rembrandt.3 One that is comparable to this anonymous work is Bearded Man at a Window of 1653 by Samuel van Hoogstraten (1627-1678).4 The way in which the artist filled the entire picture surface, but also the type of window with round glass panes, are the same in both works.

Child at a Window, though, can be dated half a century earlier, for the watermark in the paper is also found in a copy of the Theatrum Terrae Sanctae et biblicarum historiarum (Cologne 1593) by the Delft priest and theologian Christian Kruik van Adrichem (1533-1585).5 The engraver of the print may have been German, or possibly a Netherlandish artist who had emigrated to the more tolerant Cologne for religious reasons. Helmut H. Rumbler believes that the sheet can be associated with a print by Matthias Quad von Kinkelbach (1557-1613), an engraver who was active in Cologne from 1587 to 1604.6 That scene of a laughing fool holding a needle and thread was derived from a design by Hendrick Goltzius (1558-1617).7 Although the style of engraving differs from that in the Fondation Custodia print, there are a number of striking parallels, such as the rendering of the outsize head and the flat fingernails.

The type of girl with a round face and long curly hair is also related to the figure in a drawing by Jacques de Gheyn the Younger (1556-1629) in Amsterdam.8 Both scenes remind the viewer of life’s transience. As in De Gheyn’s drawing, the girl in this print is holding a rose, a vanitas symbol. The pearls around her neck and wrists are references to human vanity. MR

2The excellent condition of the paper makes it unlikely that this sheet ever hung on a wall. However, impressions of this print are rare, so it can be assumed that prints of this kind were indeed hung on walls and did not last long in the damp houses of the day. According to Ger Luijten there are two known impressions, one is in the Waldburg-Wolfegg Collection in Baden-Württemberg, the other in Brussels, Royal Library of Belgium.