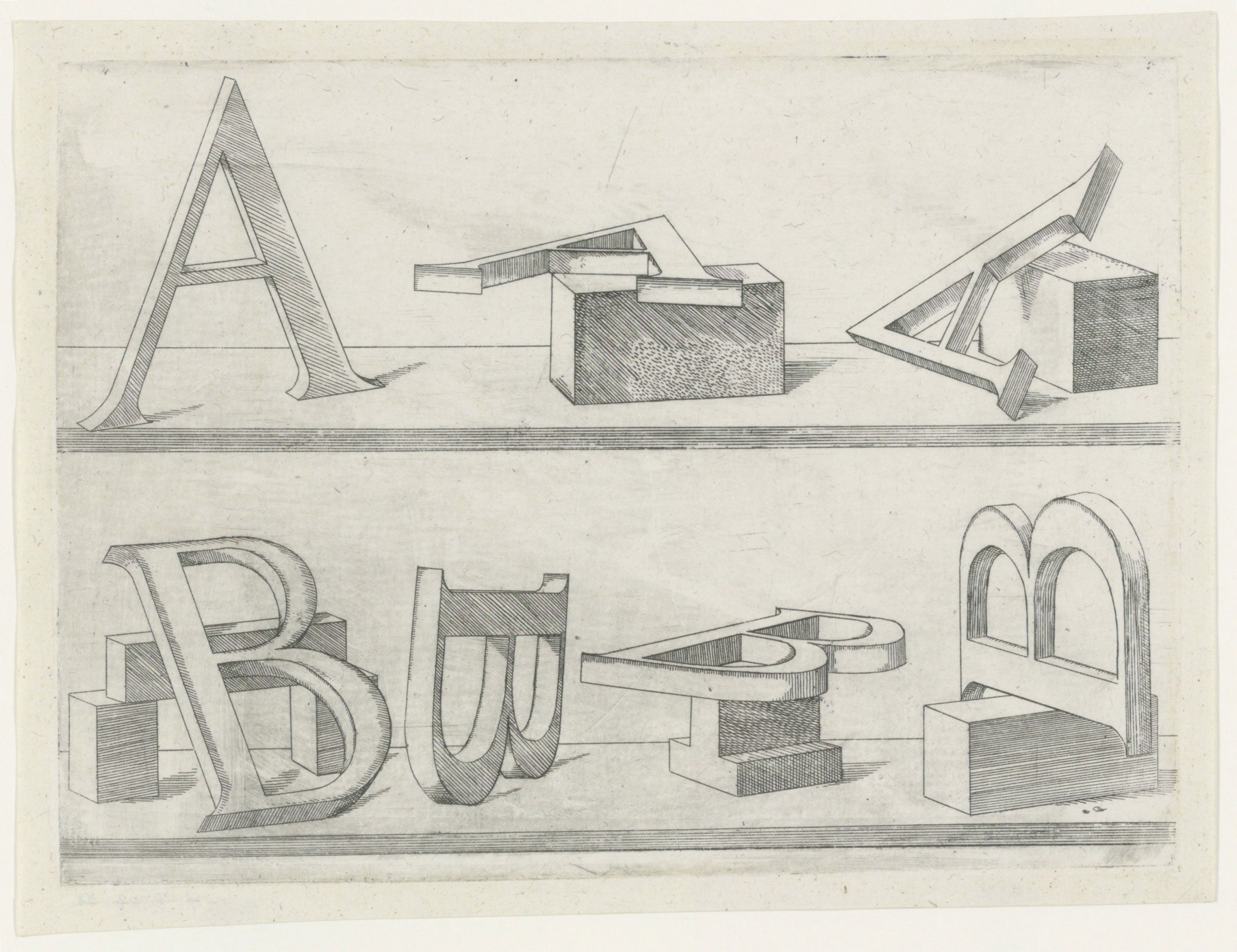 The Nuremberg goldsmith Hans Lencker (1523-1585) was also a great expert in perspective. After becoming a master-goldsmith in 1551, his talents drew the attention of the Elector Christian I (reg. 1586-1591), who invited him to work at the court of Saxony until 1576. One of Lencker’s most original creations was undoubtedly the alphabet he designed in 1557.1 However, this initiative was not unprecedented. In Nuremberg in 1525, Albrecht Dürer (1471-1528) published Underweysung der Messung (Four Books on Measurement), in which, among other things, he suggested rationalised and homogeneous formulas for creating printing types.2 According to the artist’s reasoning, capital letters – in particular A -, with their simple geometry and harmonious proportions, could become a basis for constructing other complex forms, including the human body.3

A quarter of a century later, Hans Lencker proposed an entire alphabet – only lacking J and U, which were identical to I and V respectively in the former typography – which he presented in an entirely novel fashion. The letters are treated like three-dimensional solids, similarly to moveable printing types, and are placed on small bases in a variety of geometric shapes. Each letter is shown from three or four different angles, with bold foreshortenings. All the plates are composed on the same model, each one presenting two letters, a horizontal line marking out the lower quarter in order to show, in perspective, the surface supporting the type. This utterly simple device allows the artist to create the depth of the field and occasionally produce a clever trompe l’oeil effect. Indeed, some forms seem to project beyond the edge and depart from the field of the representation to enter that of the viewer, as in the plate for T or W. The letters, no longer bound to form words, thus become independent visual objects.

In its most complete state, the series etched by Zündt also features a title page, PERSPE / CTIVA / ABC. It adopts the same graphic treatment as the other plates, the letters ABC being intertwined in a monogramme. As well as that, it presents, after the alphabet plates, nine elaborate geometric figures already anticipating those that would be engraved in 1568 by another famous Nuremberg goldsmith, Wenzel Jamnitzer (1508-1581), in Perspectiva Corporum Regularium.4

In 1567, the year the Perspectiva Literaria came out, Lorenz Stoer (1553-1589) published a Geometria et Perspectiva, with similar plates representing imaginary polyhedrons, valuable both scientifically and artistically. Lencker’s Perspectiva Literaria is therefore entirely representative of the research on the laws of optics and linear perspective carried out all through the sixteenth century and which was expressed in a unique, fascinating way in the circle of the Nuremberg etcher-goldsmiths.

Moreover, the acquisition of this series reflects the typically Dutch interest – never belied – for the art of typography. It is notably illustrated at the Fondation Custodia by its commission of a font to the typographers Fred Smeijers and Wigger Bierma, inspired by the letters of the engraver Christoffel van Dijck (seventeenth century), which it utilises for all its publications. MNG

2Dürer’s familiarity with typography is explained by the experience he began to acquire in 1498 as the publisher and printer of his own works, using the moveable types he received from his godfather, the Nuremberg printer Anton Koberger; see Erika Mary Boeckeler, Playful Letters: A Study in Early Modern Alphabetics, Iowa City 2017, p. 107.