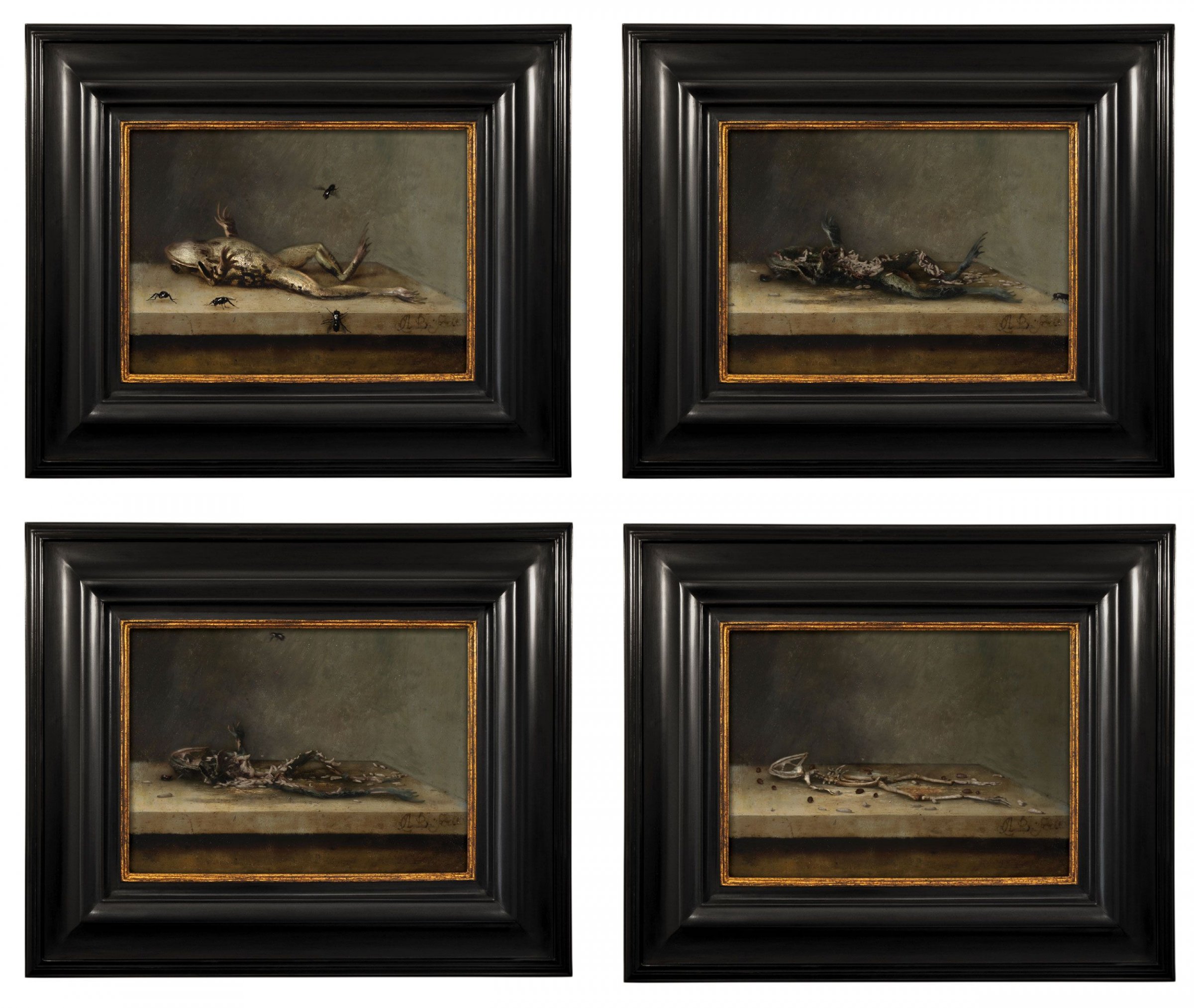 The small oil on copper by Ambrosius Bosschaert the Younger (1609-1645), purchased by Frits Lugt in 1918, represents an anomaly in the painter’s oeuvre.1 A specialist in still lifes with flowers and fruits, as his father was before him, Bosschaert was also the author of several vanities: and that’s the category in which we should place this highly realistic representation of a dead frog. While the subject is a unique instance in the artist’s painted work, it belongs to an earlier tradition of studies of insects, shells and small animals, such as those for which Joris (1542-1600) and Jacob Hoefnagel (1573-1632) were renowned in the late sixteenth century. Bosschaert’s work, then, is a meticulous description of reality to which the painter gave the mood of a memento mori. Indeed, the human posture of the animal, outstretched on its back, reminds viewers of the fate that awaits all of us. Of course, Bosschaert captured a precise moment here, but he also suggested the instant both preceding it – the creature’s legs appear to shudder in a last convulsion –, and following it – the flies poised to feed off the batrachian’s corpse.

It was this very dimension of the work that inspired the London artists, Rob and Nick Carter. For their 2013 series Transforming, the pair began interpreting paintings or drawings of old and modern masters in video animations that turned fixed images into long spun-out processes of mutation. In the case of Transforming Vanitas Painting, they chose to show the instants preceding the animal’s death, before unfolding – during their three-hour film – the slow ballet of the flies accomplishing their macabre task until all that remains of the frog is a skeleton. This work should be connected with other videos by the artists exploring a similar theme – the metamorphosis of living materials – such as Transforming Flowers in a Vase (2016)2 and Transforming Still Life Painting II (2016).3

The animation of the frog’s decomposition process, minutely scripted, entailed an in-depth study by the artists and their team;4 each of the organs having to be rendered in its entire anatomical truth. For their works after old paintings, Rob and Nick Carter begin with an extremely high-definition image of the work and use the most advanced techniques of digital animation so as to faithfully render the original texture of the painting, right down to the slightest brushstroke. These works are authentic live paintings that the pair call “twenty-first-century vanities”, or “digital still lifes”. As such, they should be seen as homages to the Dutch masters of still lifes and the amazing realism they achieved in their pictures owing to observation from life and technique.5

Ultimately, by adapting an old painting to the new ways of contemplating images, through the screen and animation, the artists wish to incite museum visitors to spend more time looking at the works and better understand what is happening in them.6 MNG

Donated by the artists to the Fondation Custodia, 2015

4The artists collaborated with 25 animators of the British studio Moving Picture Company; Florence Waters, ‘Dead frog painting that rots before your eyes’, The Telegraph, 6 March 2013.

5“They tried very hard to create something that feels so tangible that you could almost touch it. Hopefully we’ve continued with something that they worked hard to start”. Nick Carter, quoted in ibid.

10The artists collaborated with 25 animators of the British studio Moving Picture Company; Florence Waters, ‘Dead frog painting that rots before your eyes’, The Telegraph, 6 March 2013.

11“They tried very hard to create something that feels so tangible that you could almost touch it. Hopefully we’ve continued with something that they worked hard to start”. Nick Carter, quoted in ibid.