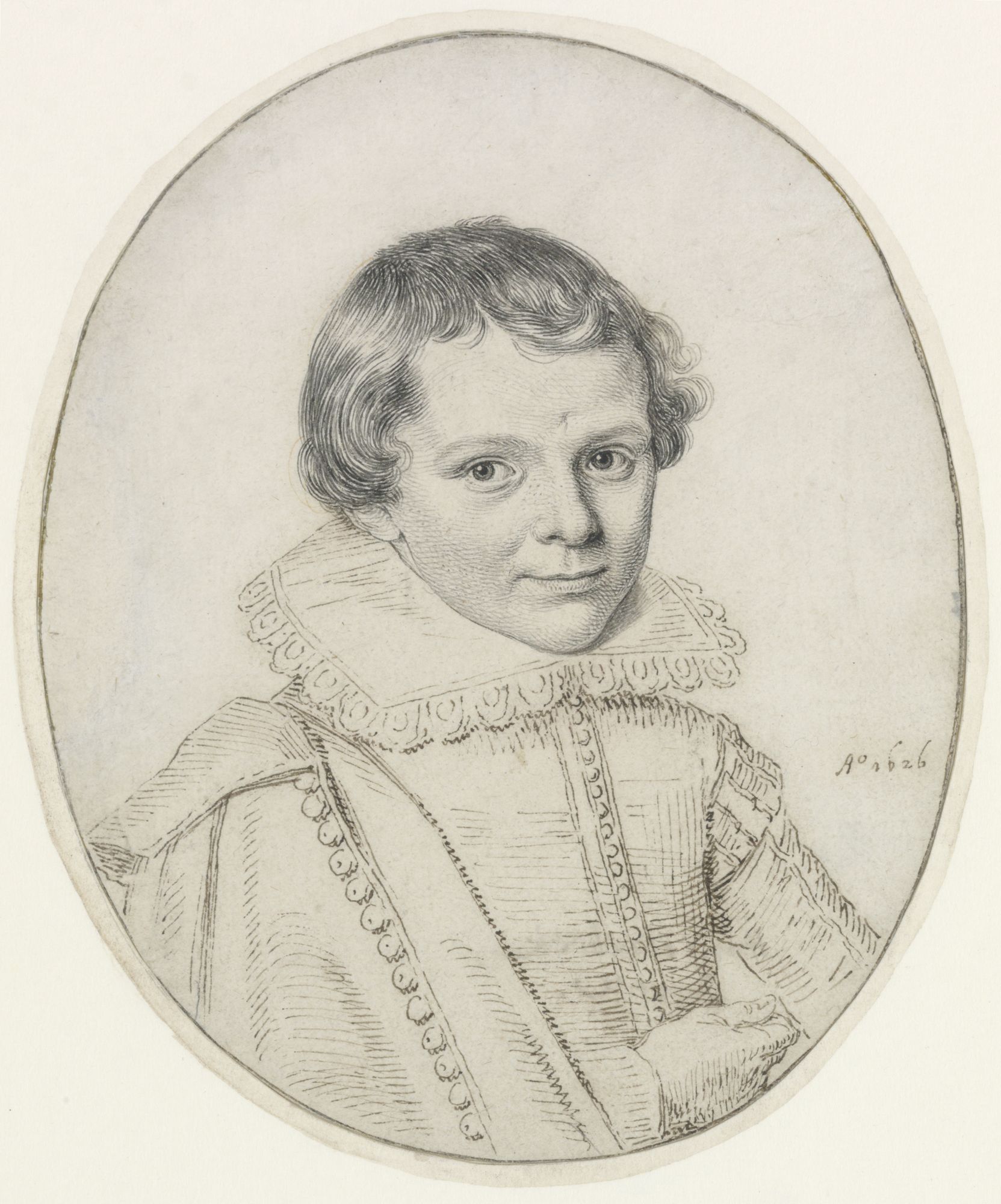 For a relatively short period, the Leiden portraitist and still life painter David Bailly made pen-and-ink portraits of his fellow townspeople.1 We know of thirty-five or so of these small likenesses on paper, which were all made between 1621 and 1633.2 Most of the sitters were scholars and scientists, like Daniël Heinsius (1580-1655) and Johan Rutgers (1584-1657), both poets and philosophers,3 the theologian and philologist Gerardus Joannes Vossius (1577-1649)4, the botanist and writer Johan van Brosterhuysen (c. 1596-1650) and the writer Jacob van der Burg (c. 1600-1659).5 We know of only a few drawn portraits of children by Bailly, of which this is one.6

Bailly usually dated his portrait drawings, and sometimes also signed them, but he never mentioned the sitter’s name. The identification of the subject is often provided by contemporary or later inscriptions, however the one on the back of this drawing is misleading. Hans Joostz Overbeeck (1626-1690), whose name is written in a seventeenth-century hand, cannot possibly be the boy portrayed. We know, after all, that this scion of the Overbeeck or Overbeke family of merchants was born in 1626, the year Bailly dated this drawing.7 His elder brother Joost (1620-1663), who may have gone to Leiden in 1626 to visit his uncle Matthijs van Overbeke (d. 1638) and his aunt Agatha Scholiers (d. 1649), has consequently been proposed as an alternative.8 Another possibility is that the boy depicted is in fact this couple’s own son Johannes van Overbeke (1616-1680), who would have been ten in 1626 – which could well be the age of the boy shown here.9 According to the collector and artist biographer Aernout van Buchel (1565-1641), there were two portraits by Bailly hanging on the wall of the Van Overbekes’ house in 1628.10 It is perfectly feasible that they were of the couple themselves, and that they had also commissioned the artist to make a portrait of their (then only) son.

Bailly drew the boy’s head with very fine pen lines, some cross hatching in the face and just a few touches with a brush for the hair and eyes. He probably learned this graphic manner of drawing during his apprenticeship with Jacques de Gheyn II (1565-1629).11 The fact that the artist was more concerned with accurately depicting the head is emphasized by the loose handling of the clothes and torso. He used two different coloured inks for the head and the chest, respectively black and brown. Here they express a difference in texture, whereas the combination of the two inks is more complementary in his other portrait drawings.

Dated, lower right, in pen and brown ink, Aº 1626. Inscribed on verso: lower left, in pencil, BRII; below that, in a late seventeenth-century hand, in brown ink, Hans overbeek / Joostz.

1Bailly also portrayed a few people from Amsterdam, who were probably visiting Leiden.

2The earliest drawn portrait – a likeness of the painter Jan Pynas – dated 1621 is now in the collection of the Harvard Art Museums, Harvard (Cambridge), inv. no. 1.2018.206. A number of the drawings were made into prints.

5The last two were portrayed together in a double portrait, now in the Teylers Museum, Haarlem, inv. no. PP 0203.

6Graphische Sammlung im Städelschen Kunstinstitut, Frankfurt am Main, inv. no. 1188; Klassik Stiftung Weimar, Weimar (Thüringen), inv. no. KK 4744; the drawing Portrait of a Fourteen-Year-Old Boy in the collection of the Rijksmuseum, Amsterdam, inv. no. RP-T-1881-A-126, is attributed to Bailly. Should it indeed prove to be by Bailly it would be his earliest known drawing (1617), see Schapelhouman and Schatborn 1998, no. 29.