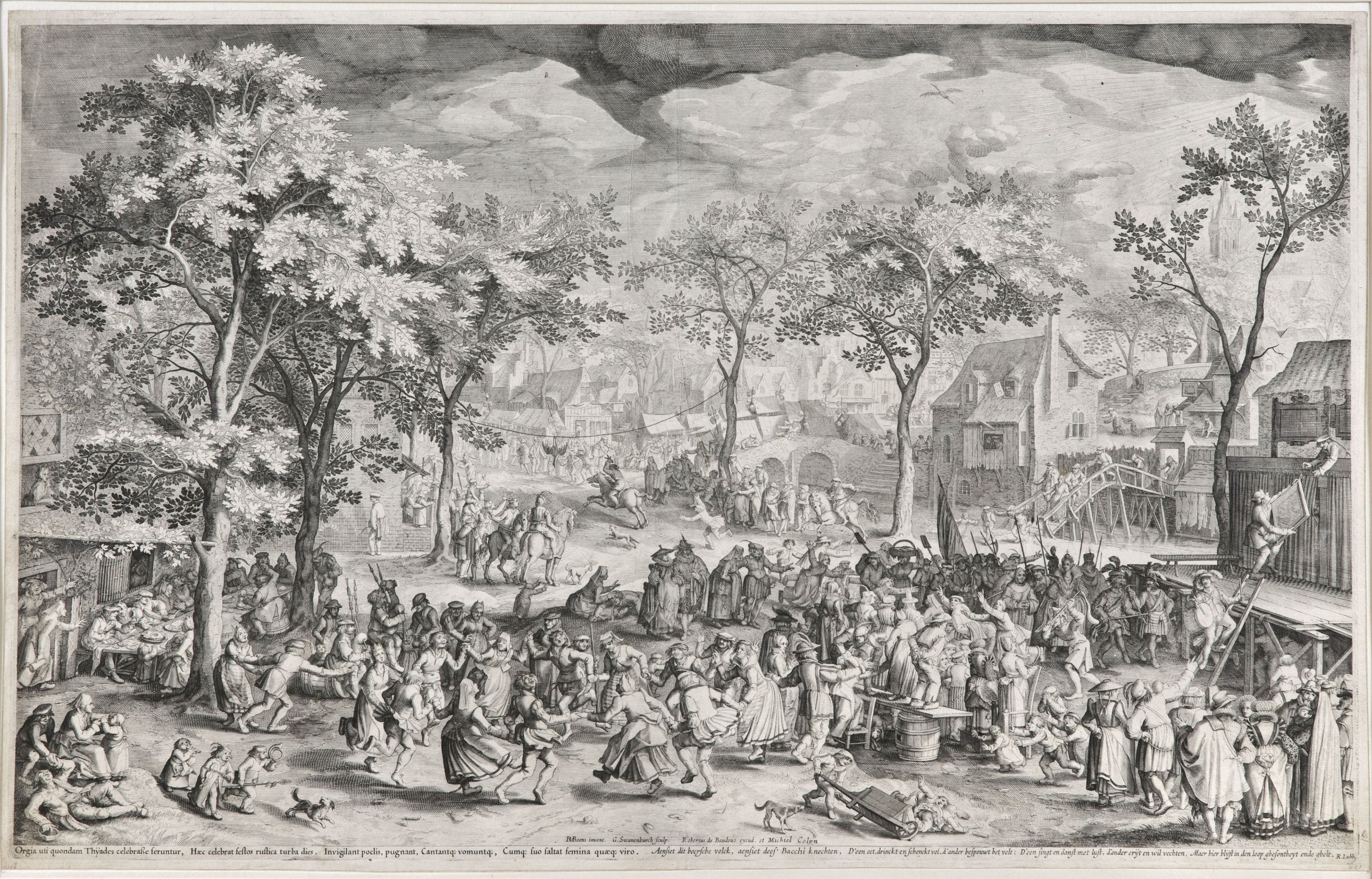 Halfway between being amused and amazed, the town-dwellers, recognizable by their fancy clothes, behold the peasants’ festivities. Their attention is drawn to an open-air performance by rhetoricians which is about to start at the right. The costumed players – a king and a queen, a soldier, two priests and a figure in an animal mask – make their way to the stage, while a group of people have gathered in anticipation of the play about to begin. Another exciting event is happening in the background, where people are playing ‘drawing a goose’ or ‘goose riding’, a popular but barbaric game which involves beheading a goose fastened to a rope while riding on horseback in full gallop. Moreover, the scene is populated with dozens of peasants, some of them dancing, their heads thrown back in ecstasy, while others are copiously drinking and eating. One of them has had too much to drink and is “bespewing the ground”, supported by a friendly woman on his left.

Underlined by the text in the margin, the print clearly draws a moral, indicating that we should follow the example of the town-dwellers and refrain from the vulgar behaviour of the peasants, because “here they hazard health and money”.1 These types of scenes, which often came with a moralising message, were very popular in the sixteenth century, mainly in the southern Netherlands. Through prints after Pieter Bruegel the Elder (1526/30-1569), one of the first artists to make a speciality of peasant weddings and fairs, and the immigration of many artists from Flanders, such as Jacob Savery (1565/67-1603) and David Vinckboons the Elder (1576-1630/31), the subject also gained ground in the north.

The latter, undoubtedly familiar with Savery’s work, made the design for the present print, which was engraved by Willem van Swanenburgh, one of the most promising Dutch engravers of the seventeenth century. Swanenburgh was particularly talented in rendering the atmospheric perspective of Vinckboons’ carefully washed designs onto the copperplate.2 He achieved the same effect by emphasizing the shadowy parts with a dense network of crosshatching, while drawing the sunlit figures and foliage only with contour lines. In other areas, where the contrast between dark and light is less pronounced, the artist worked up the copperplate with finer lines and hatching.

The print was published under the supervision of Robert de Baudous (1574/75-after 1659) and Michiel Colijn (1584-1637), probably c. 1610.3 After Colijn’s death, De Baudous acquired the sole rights to the edition and removed the former’s address. The plate subsequently came into possession of other publishers who continued to publish the print up to the eighteenth century.4 The Fondation Custodia impression is one of the only two known in the first state which bears the addresses of both Colijn and Baudous.5 MR