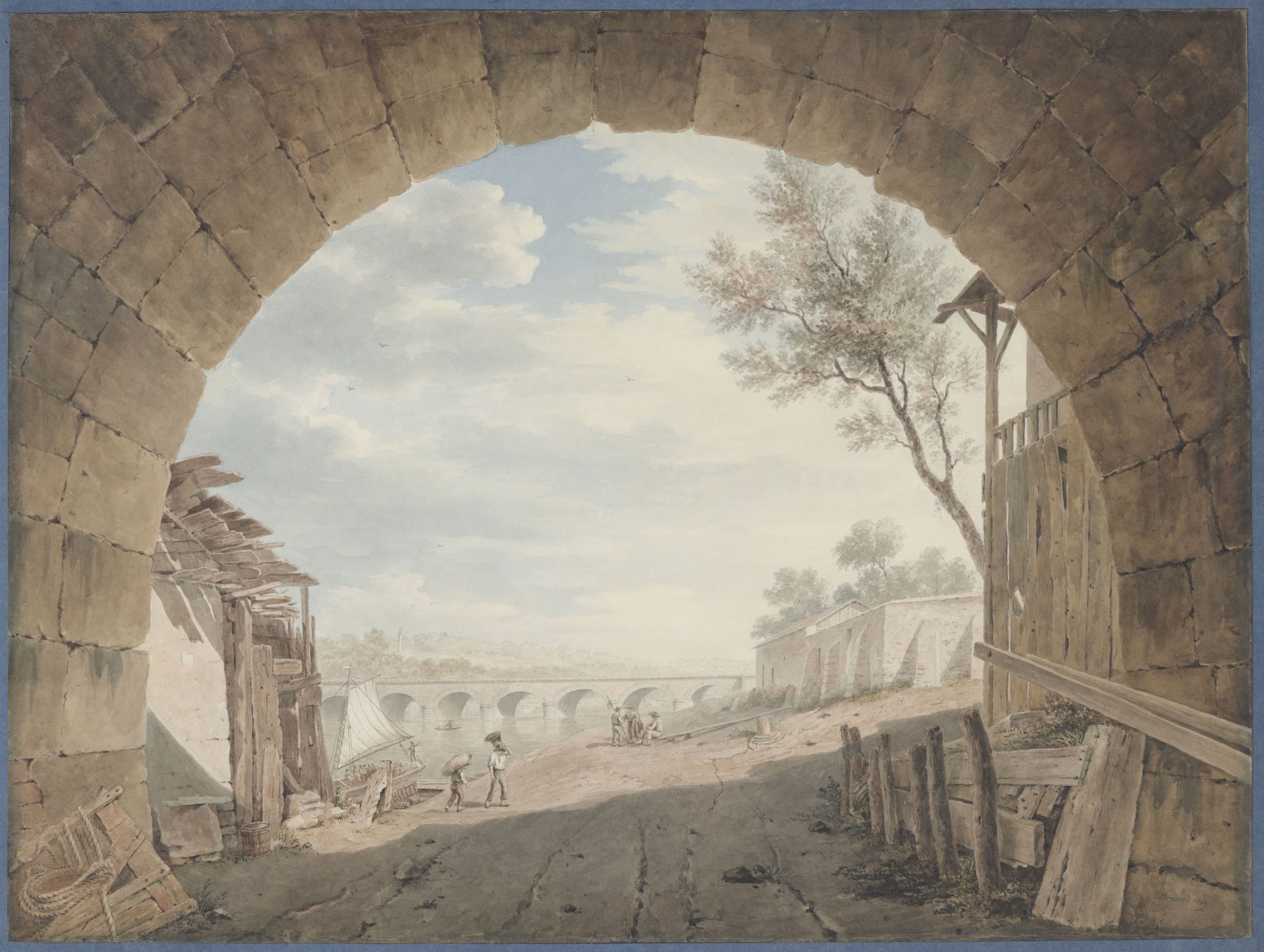 A pupil of Jean-Victor Bertin (1767-1842), Christian Brune started out teaching topography and landscape at the École Royale Polytechnique in 1817. He also wrote a Demonstrative Table of Scripts Adopted for Topographic, Chorographic and Geographic Maps for the Use of the Pupils of the École royale Polytechnique, illustrated with prints after his drawings.1 During his professorship, Brune drew and painted a number of views of the outskirts of Paris, including Bellevue, Meudon, Ville d’Avray, Saint-Cloud and Sèvres.

At the time, the old Sèvres bridge, built during the reign of Louis XIV when the Court had just moved to Versailles, was the only bridge crossing the Seine on the direct line that connected Paris and the royal city. Its wooden architecture was upheld by two stone arches on each side of the river – the one on the right bank is seen here. In the background of our drawing we can also see the new Sèvres stone bridge, built under Napoleon I, up-river from the original. The angle of the view, placing the architecture of the bridge at the centre, confers on this river landscape an arched frame: a compositional artifice that may recall the drawings by François-Ėdouard Bertin (see cat. no. 3) who also was trained by Jean-Victor Bertin. But Brune interestingly turned this motif into a stage device, in the same way as the Piranesi followers of the previous century. In doing so, he played on the contrast formed by the cast shadow of the bridge and the sun-drenched landscape, placing the vanishing point in the lower third of the composition so as to give the arch a monumental appearance. The result is a highly ordered and balanced view – as an expert topographer Brune arranged it according to a strict geometry – but one that is certainly not lacking in picturesque details: the old planks, the grooves left by the cartwheels, the figures of workmen unloading the boat. By framing his composition in this way, Brune also encourages a more metaphoric interpretation of this landscape; under the arch of the old bridge the outline of the new one appears, like a visual shortcut from past to present.

Shown on the occasion of his second presence at the Salon, in 1819 – with a View of the Château of Coucy (no. 184) and several other landscapes not described (no. 185) – our View of the Bridge of Sèvres is a work that the young artist wished to highlight as a demonstration of his talents in topography and landscape. Even today, the format of this watercolour surprises us. As Charles Gabet pointed out, Brune had a propensity for “large-sized watercolours”.2 As such, our drawing, surely one of the largest done by the artist, expresses the pictorial ambition of a painting. MNG