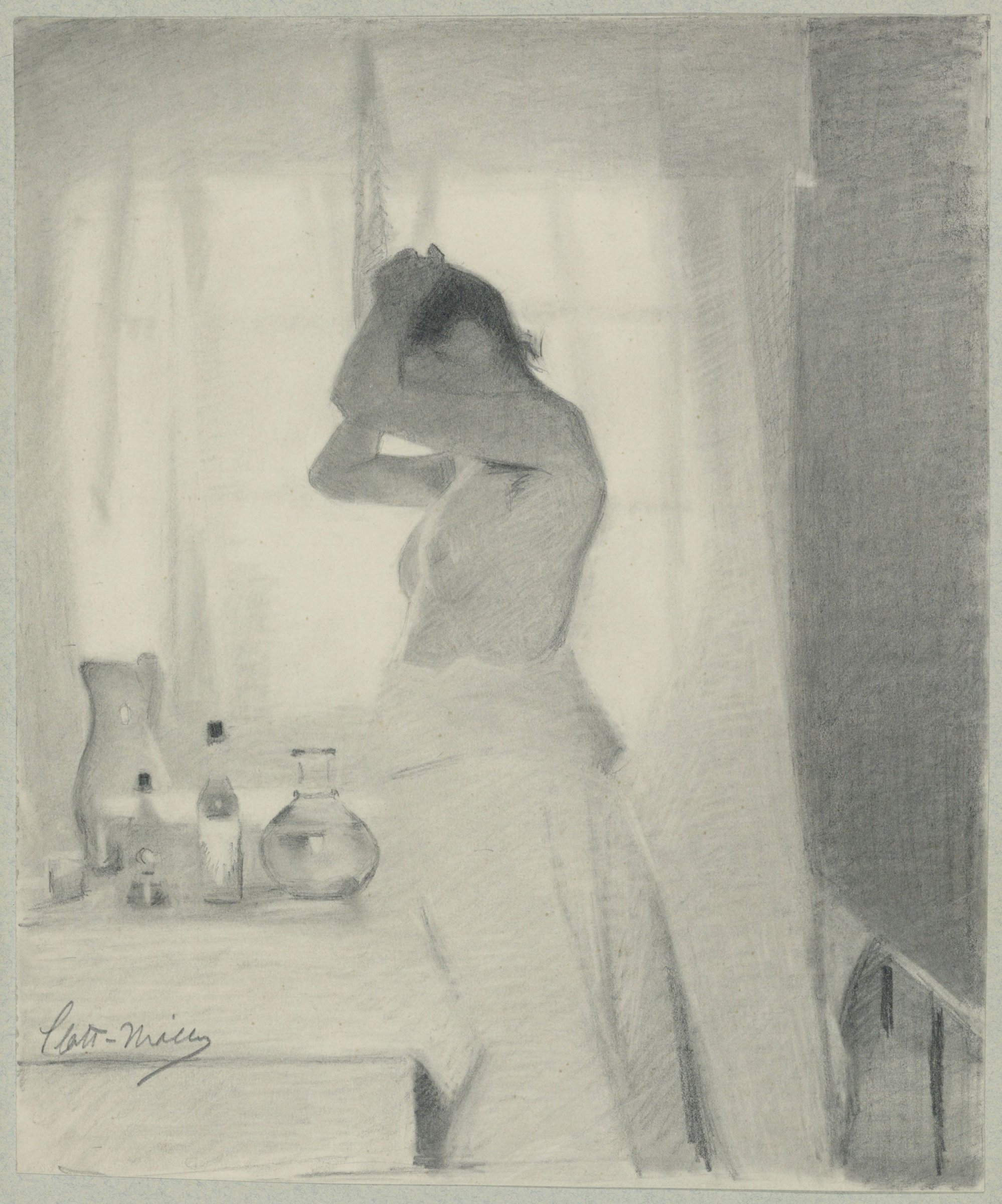 This delicate graphite drawing gives us a glimpse of a young woman dressing her hair. She is standing in front of a window with her torso bare and her arms concealing her face. The net curtains let a bright but soft light filter through, outlining the glass flasks and the pitcher on the toilet table in front of her.

The inscription on the old mount, as well as the ’Kunstforeningen’ stamp on the back, tell us that the drawing was connected with the lotteries organised by this Danish artistic association.1 With the purpose of sponsoring the visual arts in Denmark, the ’Kunstforeningen’ bought pictures directly from the artists, and then distributed them once a year among its members by drawing lots. The association also asked the artists to provide a drawing of the subject to be preserved as a record. These drawings were annotated below or on the mount, indicating the date of the lottery and the winner’s name.

In the case of our drawing, the inscription tells us that it was the painter Peder Severin Krøyer (1851-1909) who selected the painting by Harald Slott-Møller on the occasion of the drawing of 23 February 1890.2 The painting appears in the list of works of this lottery published in the association’s accounts, under the title Interiør (“Interior”) and mentioning the price for which the association had bought it from the artist: 800 Danish krone.3

The story is also recorded in the correspondence between the painters’ wives, Agnes Slott-Møller (1862-1937) and Marie Krøyer (1867-1940). They were also painters, and very close friends, too, as their epistolary exchanges confirm.4 On 27 January 1890, Agnes wrote to Marie: “Then I wish to tell you that you won in the artistic association, but perhaps you already know about it. I would only recommend that you select Harald’s painting, if it has not yet been taken, because I would be so very happy knowing it was yours”.5 Later, on 9 March 1890, Agnes wrote to Marie to say that they have probably heard they have won Harald’s picture and that she is delighted.6 Peder Severin Krøyer kept the painting all his life: it was not sold until his posthumous sale.7 The present whereabouts of the painting are unknown.8

The drawing, the only testimony of the work, is not a mere copy, but a finished drawing full of freshness and delicacy. However, we do not know who the woman portrayed is. Considering the intimacy of the scene, it might well be the artist’s wife, Agnes: even if her arms conceal her face, we can make out a likeness.9 It is worthwhile observing that the drawing resembles a portrait of Marie Krøyer, painted during their honeymoon in September 1889, which bears the same title: “Interiør”.10 We glimpse Marie through the opening of a door while she is doing her hair, but here the face is visible and she is dressed. Could Krøyer have seen the painting by Slott-Møller and been inspired by it?11 RSB

7Sale, Copenhagen (Winkel and Magnussen), 5-7 December 1910, no. 518 (Lugt Rép. no. 69204). My thanks to Jan Gorm Madsen for his assistance in tracing the history of the drawing and the painting as well as his advice for the entry.

8No reproduction of the painting is known.

11The painting by Slott-Møller dates to before the Spring of 1889 when it was shown at Charlottenborg (see note 3). At the time Krøyer was abroad, but was back in Denmark by the end of July; see ibid., p. 331. It is possible that he could have seen it during this short period.