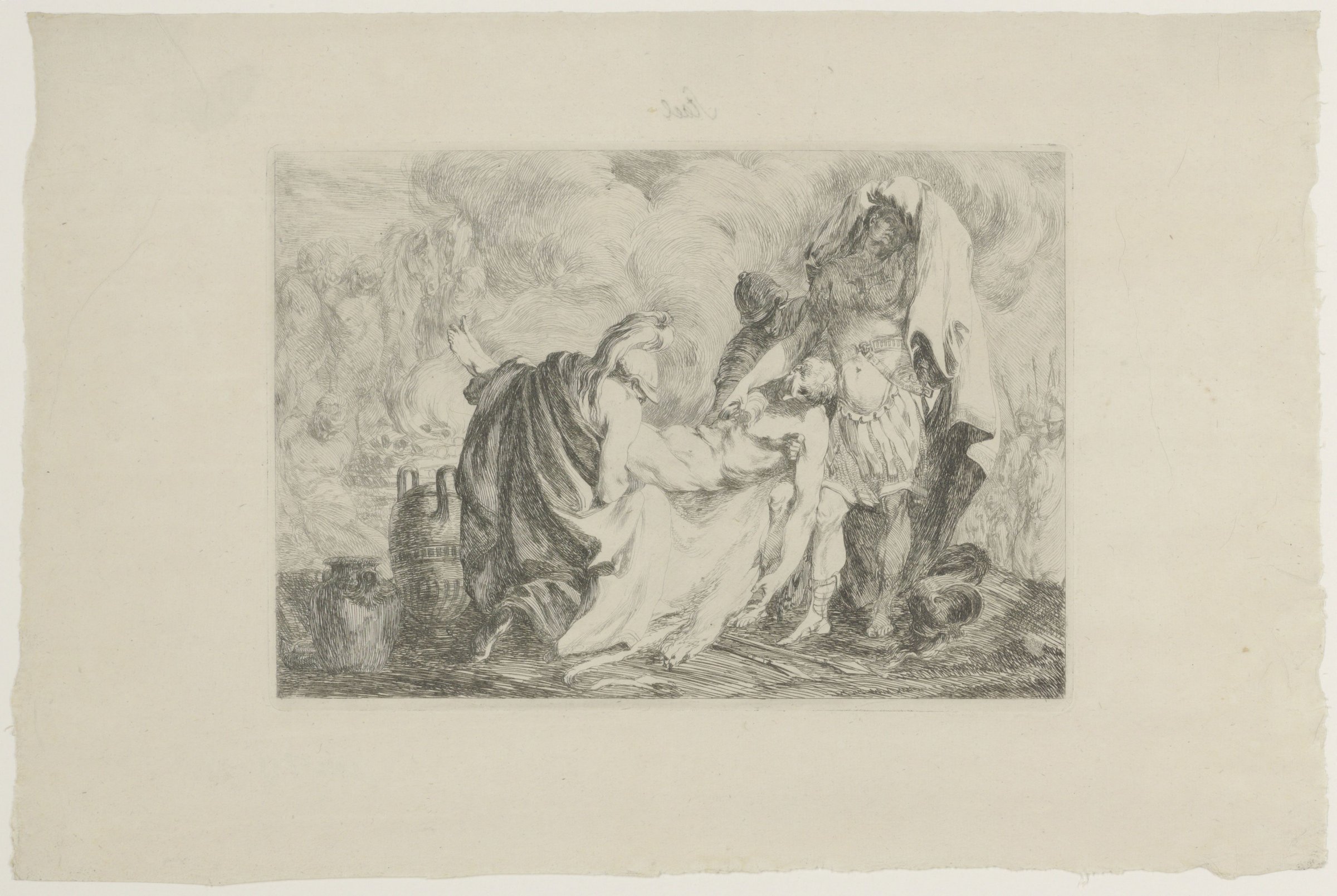 The iconography illustrated here by Sergel is derived from Tableaux drawn from [...] Homer and from [...] Virgil, published by the Comte de Caylus (1692-1765) in 1757. In this book, the author lavishes on artists a repertory of subjects drawn from classical history, as well as providing precise instructions regarding composition and expression. In the Tableau VIII, he evokes Achilles’ grief – which must be “the artist’s greatest object” – when the hero discovers Patroclus’ dead body borne by his comrades-in-arms. He goes on to describe in detail the preparation of the dead body and the pyre in the following tableau.1 Sergel closely followed Caylus’ instructions when he began to compose the subject, but proved himself an inspired interpreter by combining the two tableaux in the same scene. Achilles’ exorbitant pose, his face partly covered by his long cloak, laying locks of his hair on the body, bestows the character of a classical tragedy on this representation. At the same time, the prostrate attitude of the figure seen from behind, whose face is concealed, expresses interiorised grief. Finally, Patroclus’ dead body, forming an arc of a circle, ensures the narrative coherence of the group by concentrating upon it the gestures of the three figures. For its composition, Sergel’s etching is steeped in the tradition of Baroque entombments, which the artist adapted here to a secular iconography.2 The choice of the subject nevertheless reveals Sergel’s aesthetic aspirations, marked by his contact with the Comte de Caylus and Edme Bouchardon (1698-1762), two champions of Neoclassicism, on the occasion of his journey to Paris.3

The dramatic intensity that characterises the scene is sustained by an entirely personal graphic treatment. Here, the artist availed of flowing linear contours and carved out the shadows with long, curved, close-set hatchings; parallel, crossed or in zigzags. The thickness of the line in some parts – notably the kneeling figure’s cloak – contrasts with large spared areas that define Patroclus’ body, his shroud and the lion hide. In the background, the group of figures readying the pyre on the left, and the horsemen4 on the right, are like ghostly shadows in the midst of the whirling spirals formed by the smoke. Sergel produced an intense contrast between a very dark foreground and an almost grey background, obtained by varying the biting time of the plate. The work, created by the 26-year-old artist, demonstrates a visionary formal freedom and expressionism.

This etching is an exception in Sergel’s oeuvre. Above all a sculptor, and also a prolific draughtsman, he tried etching5 only twice during his first Swedish period – that is, between his sojourns in Paris and Rome.6 We have every reason to believe that these forays into the field of engraving were mere experiments for the artist, and that he did not intend to publish them, as their belated discovery would suggest.

The acquisition of this work confirms the interest of the Fondation Custodia in Scandinavian artists, unfailing since the directorship of Carlos van Hasselt. Within its collections, Sergel sits alongside leading Nordic figures, such as Christoffer Wilhelm Eckersberg (1783-1853) and Bertel Thorvaldsen (1770-1844). MNG

Inscribed on verso, perhaps by the artist, in black ink: “Stael”

1Notably “the vases, the perfumes and the balsams [...] in one corner of the composition”, and “the body that would be covered with a dazzling white veil”; see Anne Claude Philippe de Pestels de Lévis de Tubières-Grimoard, Comte de Caylus, Tableaux Drawn from the Iliad, from the Odyssey by Homer and from the Aeneid by Virgil, with Some Remarks on the Costume, Paris, 1757, book 18, tableaux VIII and IX drawn from the Iliad, pp. 93-94. Sergel illustrated another tableau from the same book in a drawing, Patroclus Consigning Briseis to the Heralds of Agamemnon, Stockholm, Nationalmuseum, inv. no. NMH A 31/1970 (red chalk; 323 × 405 mm); see Per Bjurström, Sergel - Dessins, Paris 1975, pp. 14-15, repr.

2Moreover the theme of mourning and funerary iconography runs through his drawn work, recalling the artist’s melancholy temperament, notably in his preparatory study for the funerary monument of Gustav III, Stockholm, Nationalmuseum, inv. no. NMH 725/1875 (pen and brown ink, with brown wash, over a sketch in black chalk; 350 × 195 mm); and in a sketch representing a burial, titled Bestämda målet är en grav (“The Ultimate Destination is the Grave”), Stockholm, Nationalmuseum, inv. no. NMH 38/1944 (pen and dark brown ink, with brown wash; 172 × 202 mm); see Per Bjurström, Johan Tobias Sergel 1740-1814, exh. cat., Copenhagen (Thorvaldsens Museum) 1976, respectively no. 86 and 106; and http://collection.nationalmuseum.se/eMP/eMuseumPlus?service=ExternalInterface⟨=svn.