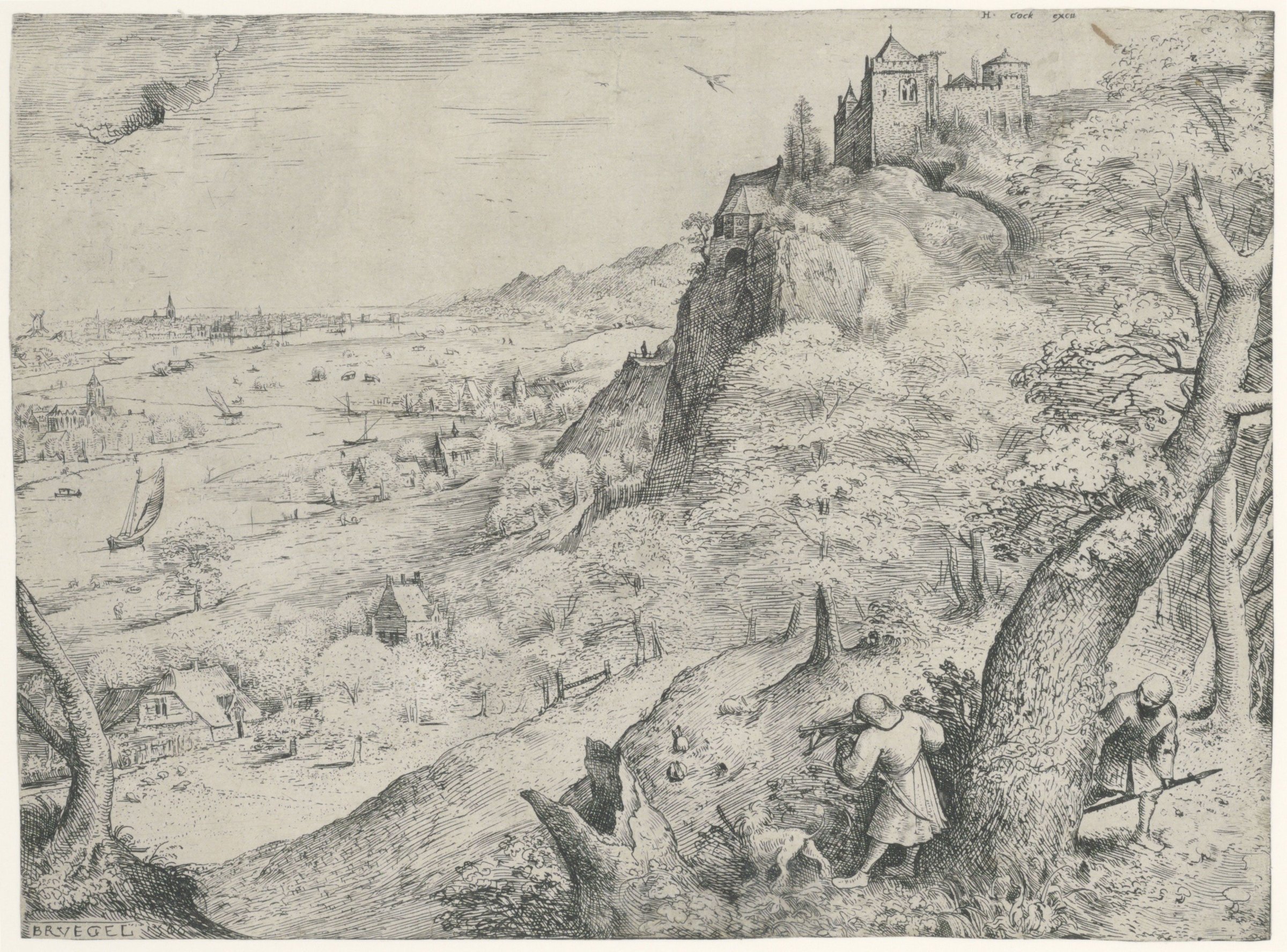 What remains of the oeuvre of Pieter Bruegel the Elder, one of the most influential artists of the sixteenth century in the Low Countries, is rather small. Only forty paintings and little more than sixty drawings have come down to us – all produced between 1552 and 1568. It was through the large-scale production of prints, made after his designs, that he became known throughout Europe during his lifetime. Surprisingly, the artist created only one print himself, the etching called The Rabbit Hunt. It depicts a river landscape with a fortified city and a cathedral in the distance. Situated on a hilltop, a large monastery or castle with a polygonal-shaped chapel nearby overlooks the valley. In the foreground a hunter accompanied by his dog aims his crossbow at two rabbits, while another figure sneaks up behind a tree, his spear at the ready.

The print has been associated with the proverbs in Erasmus’s Adages (1553): “He who chases two hares catches neither” (Duos insequens lepores neutrum capit) and “A hare yourself, you hunt for prey” (Tute lepus es, et pulpamentum quaeris).1 However, contemporary texts relating to Bruegel’s print are not known, leaving us ultimately uncertain about its precise meaning.2 Nevertheless, the print wonderfully demonstrates Bruegel’s qualities as a landscape artist. With sketchy dashes, dots and lines, the artist rendered the landscape, creating a lively effect of light and shade. Certain elements, such as the horizontal parallel hatching and the dotted outline of trees, can also be found in his earlier landscape drawings.3 Moreover, the artist enlivened the scene with numerous details, such as the fisherman at the river edge, the farmer ploughing his land and the lonely traveller on a rocky outcrop overlooking the valley.

A preliminary drawing for the print, long considered a copy after a lost original but reattributed to Bruegel by Hans Mielke in 1996, was acquired by Frits Lugt in 1957.4 Compared to the drawing, certain elements in the print are slightly different. While working directly onto the surface of the copperplate, Bruegel altered the position of the mountain and the trees. He also added a large, hollow tree trunk to the foreground, eliminating the third rabbit in the drawing. The date on the print, which reads 1506 instead of 1560, is an error by the artist, who was not familiar with working in mirror image. Bruegel probably realized he had reversed the digits after some impressions were printed, and consequently crossed out the year altogether. MR