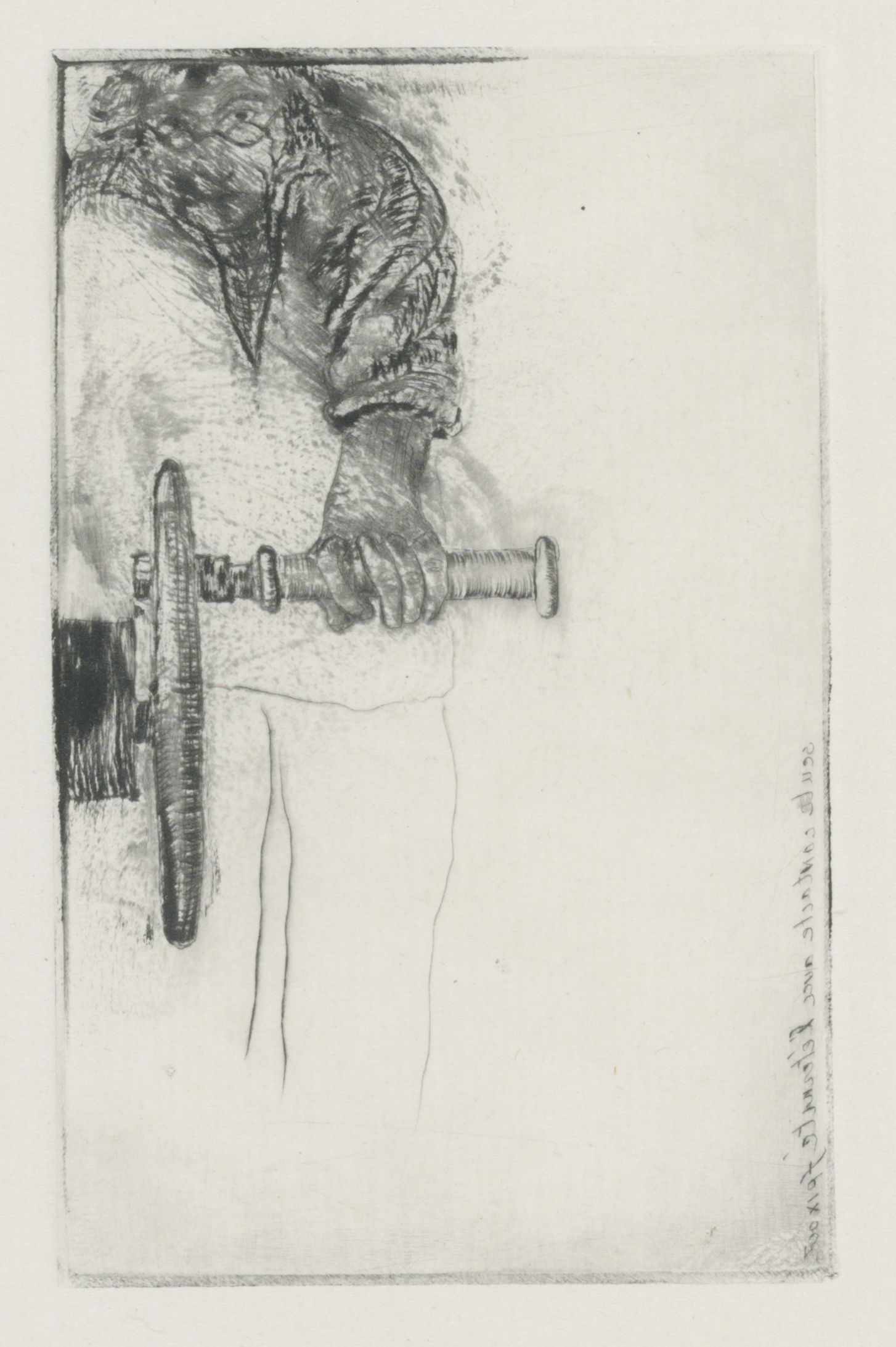 The contemporary Dutch engraver Frans Lodewijk Pannekoek is very well represented in the Fondation Custodia, which boasts almost 800 prints by his hand, on just about every subject: studies of plants and small animals, portraits, landscapes, vanities, etc. However, the self-portrait is almost absent from his printed corpus: besides this one there is only a Self-Portrait with a Rifle, dated to 1976, his first,1 and another dated to 1997, and annotated The Eyes Looking North, four states of which are held by the Fondation.2 In the latter one, he represented himself full-face, closely framed, the opaque lenses of his glasses rendered in reserves of paper, paradoxically masking the eyes referred to in the inscription.

In his Self-Portrait as a Printer of 2005,3 he performed a radical ellipsis, representing only his face, his arm and his hand turning the press crank-handle, while the outline of the legs is merely suggested with a faint line. This time his eyeglasses are lowered on his nose, revealing his frontal gaze turned towards the viewer. His hand and forearm seem out of proportion, tensed and straining to drive the heavy press. Thus the representation concentrates on the three essential concepts of artistic creation: eye, hand, tool. In this print, the artist, as it is often the case, plays with a plate tone, that blurs outlines and partly dissolves forms. He also sticks with his own tradition, when he wrote out an enigmatic inscription on the plate.

Two preparatory drawings in pencil – one of the right hand on the handle, the other of the face – on a double page of a sketchbook4 that entered the Fondation Custodia in 2007, allow us to grasp more fully the genesis of this astonishing engraved self-portrait, the result of a sort of grouping on the plate of these two separate graphic elements. The drawing of the face, dated by the artist to 10 November 2005, is titled “GRABADOR 68 / [pa?] el torculo” (the Spanish word tórculo designates a cylindrical press) and also annotated “Dolores por / todas partes / [por?] la noche” (“Pains all over [?] at night”). Thus, the artist recorded in this swift self-portrait the physical effect of this work session: sore muscles and fatigue. MNG