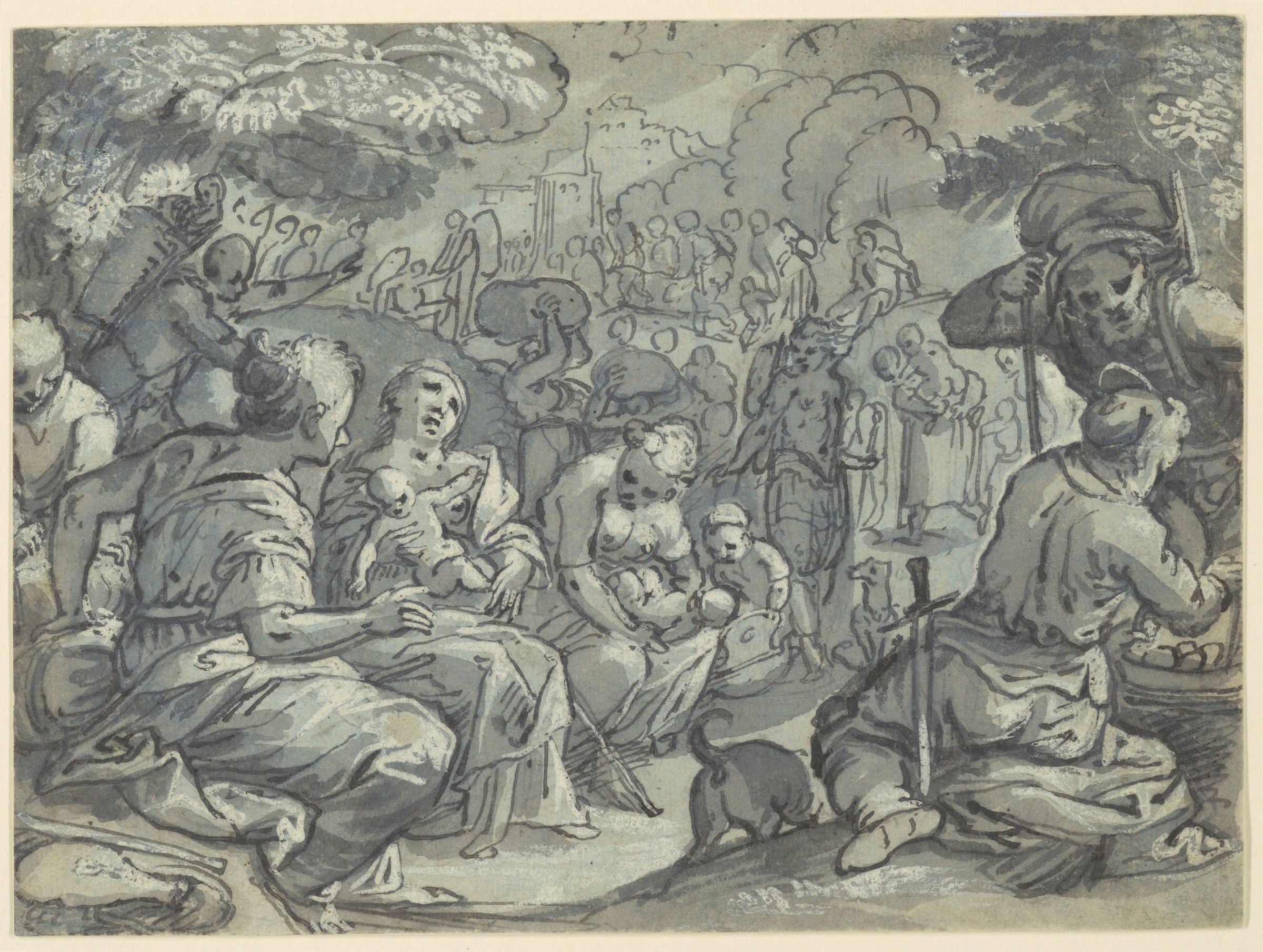 Little is known about the life and work of the Flemish history painter Adam van Noort. According to the artists’ biographer Arnold Houbraken (1660-1719), the artist was already “buried in oblivion” (“in de vergetenheid begraven”) by the time he started compiling De groote schouburgh der Nederlantsche konstschilders en schilderessen, a few decades after Van Noort’s death.1 However, he must have been an artist of some standing as his portrait is included among other leading Antwerp contemporaries in the Iconography of Anthony van Dyck (1599-1641).2 We do know that Van Noort entered the guild of St. Luke in Antwerp in 1587, presumably after an apprenticeship to the Mannerist painter Jacob de Backer (c. 1540/45-before 1600). Ten years later he was elected its dean, a highly prestigious position. During his long career, more than thirty pupils studied under him, among them Peter Paul Rubens (1577-1640) and his son-in-law Jacob Jordaens (1593-1678).

Although he lived almost eighty years, his surviving oeuvre is small and only very few paintings and drawings can be securely attributed to him.3 Scene of the Exodus is not signed, but it can be compared to two drawings attributed to the artist by Hans Mielke in Cologne and Leiden,4 and a sheet catalogued as Van Noort in New York.5 There is a certain looseness in the handling of the pen and brush in these drawings, e.g. the contours are drawn with coarse pen lines and wash is freely applied over the entire sheet with a broad brush to create shadow and volume. The figures have characteristic heads, with strangely rounded foreheads, eyes and noses drawn with short dashes and dots, and long, pointy fingers. They recall the elegant, Mannerist figures in a drawing by Van Noort in Rotterdam, dated 1598.6 However, the crude draughtsmanship in these sheets contrasts with this earlier, more refined drawing and, as such, a later dating seems more plausible. Closer in style are three monogrammed illustrations for Thomas Sailius’ Thesaurus precum, meditationum ac litaniarum (1609), dated 1608.7

Van Noort specialised in religious subjects, but mythological, allegorical and genre scenes are known by him as well. The present drawing probably depicts the Israelites readying themselves to continue their journey through the desert to the Promised Land, perhaps after they have gathered the Manna provided by God (Exodus 16:1-36). In the foreground two men are bent over a basket, which appears to be filled with food, while in the background people are getting up and hoisting large bundles onto their heads and shoulders. However, Moses is nowhere to be seen.

A painting on the art market, described as ‘circle of Van Noort’, depicts another episode from the Bible book Exodus: Moses striking water from the rock.8 Certain elements, such as the arrangement of figures along a diagonal axis, the repoussoir on the left with a seated woman in profile and a mother nourishing an infant also appear in Scene of the Exodus. To date, no painting by Van Noort with the same scene is known. Perhaps the artist made the highly finished sheet as an individual work of art, or it may have served as a design for a tapestry, hence the decorative floral elements added in white gouache. Van Noort was probably also employed as a tapestry designer in the workshop of Francois Spiering (1551-1630) in Delft.9 MR

Pen and black ink, with grey and blue wash, heightened with white gouache, over a sketch in graphite, on blue paper. – 170 × 230 mm