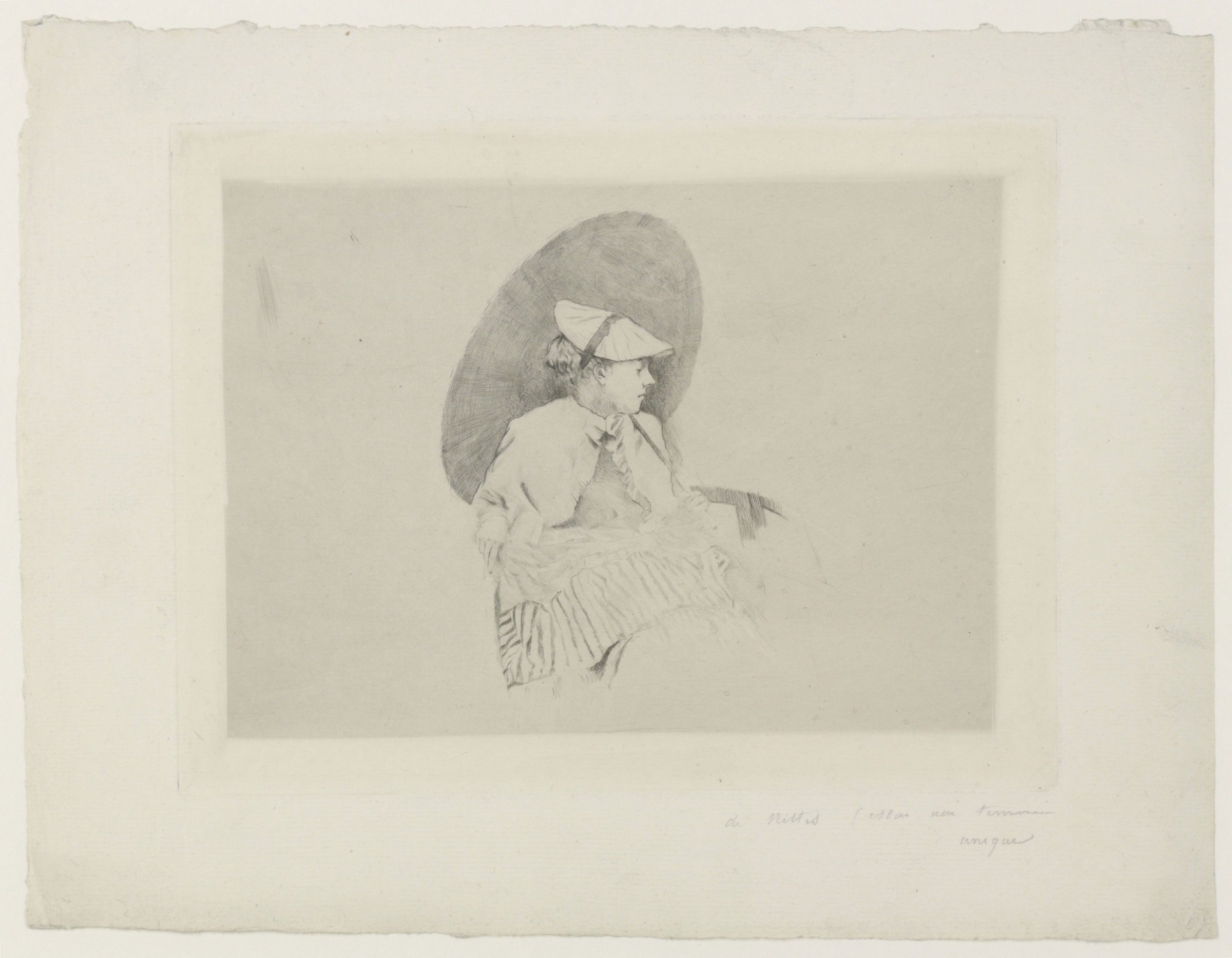 Giuseppe De Nittis is, above all, a great painter of the female figure, famed for his portraits of elegant Parisians in intimate settings, voluptuously painted in oil or pastel. His printed work explores similar themes, to which the technique – etching or dry-point – contributes an almost photographic spontaneity.

This quality is illustrated perfectly in this portrait of a young woman shading herself from the sun. The parasol motif, frequent in De Nittis,1 is underscored by a light grey surface tone, and forms a graceful halo around the young woman’s face. In the context of the late nineteenth century, this accessory is imbued with a subtle Japanese-style suggestiveness, which also affects other works by De Nittis.2 The pure line of the profile stands out all the more distinctly due to the artist’s use of hatchings to emphasise the shadow it casts on the sunshade.3 The melancholy attitude of this figure with her eyes half-closed, caught in the midst of a reverie,4 sets up a silent distance from the beholder. The many graphic ellipses, as well as the reserves of paper, confer a touching fleetingness on this portrait of an unknown woman. Due to the great sharpness of the line – which the artist achieved by scraping the burr off the plate – this composition was described by Nello Ponente et Pasqualina Spadini as a preparatory sketch for the painting In canotto.5

After establishing its true technical nature, Rosalba Dinoia suggested that the print should be considered as posterior to the painting,6 a hypothesis also backed up by the mirroring of the motif. So, De Nittis probably chose to give this figure an autonomous life on paper. However, he does not appear to have planned to publish the print, as it was left unsigned and kept in his studio. The copy catalogued by the author was the only one known at the time.7 This Woman with a Sunshade is therefore a truly rare item, and probably one of the artist’s most personal works. MNG

3Very often the artist depicts his female figures in profile, thus aesthetically making the most of these flowing outlines and the contrasts between light and dark colours, particularly in Effect of Snow, in Barletta, Pinacoteca Communale, inv. no. 950 (oil on canvas; 53 × 72 cm).