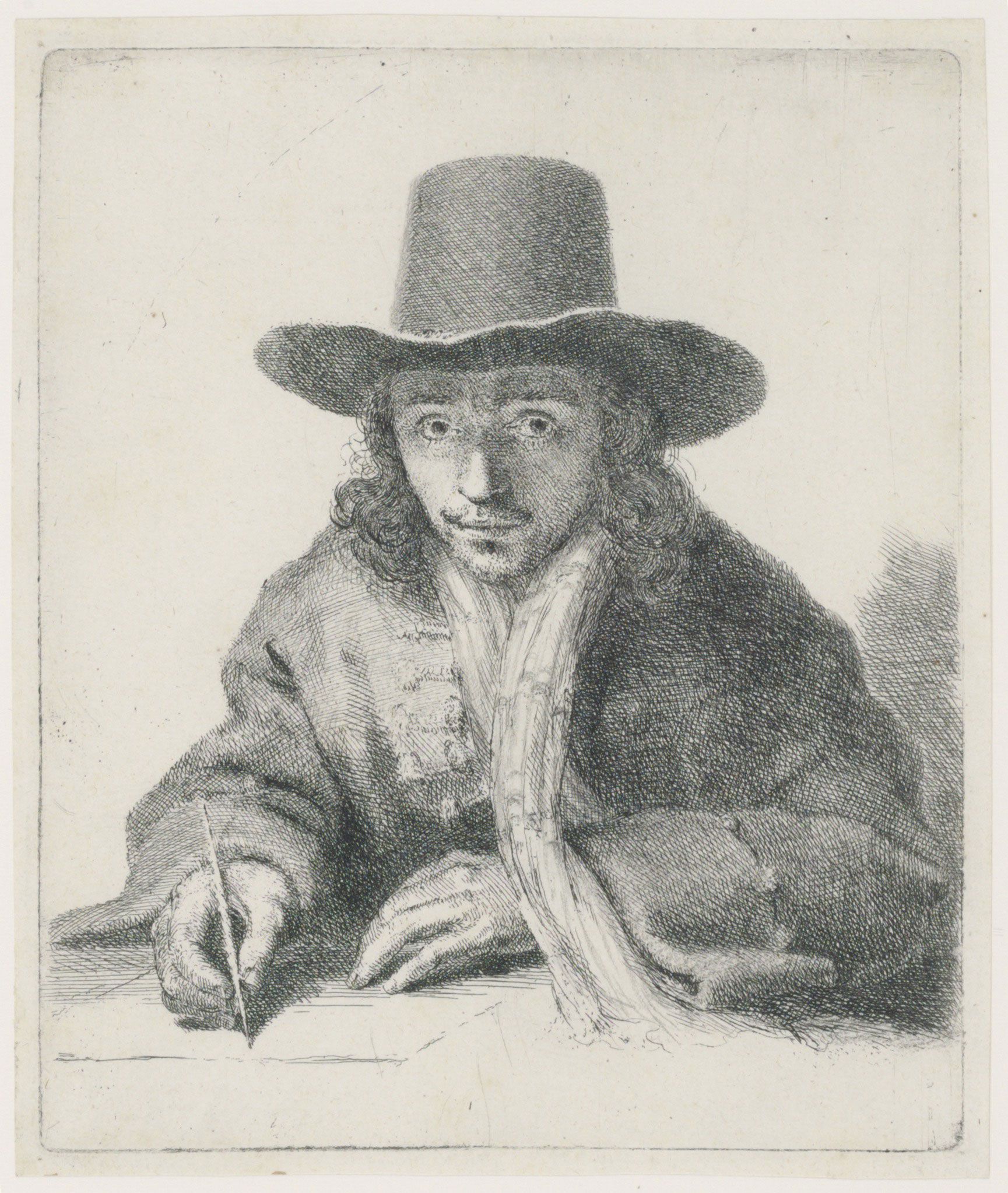 Johannes Lutma the Younger was the eldest son of Johannes Lutma the Elder (c. 1584-1669), the famous silver- and goldsmith from Emden. After a stint in Paris, the latter established himself in Amsterdam in 1621, where he was awarded a series of prestigious commissions. Presumably, he became friends with Rembrandt, who etched his portrait in 1656.1 Following in the footsteps of his father, Johannes Lutma the Younger probably worked as a gold- and silversmith as well. Yet he is not known to have done any silverwork – only medals.2 Moreover, he was a talented draughtsman and printmaker, celebrated for his exceptional method of engraving, which was called opus mallei (hammer work). Instead of using a burin, the artist worked with his silversmith tools, punching small dots onto the copperplate. With this dotted method of engraving, which was mostly employed by silver- and goldsmiths, it is possible to create prints with tonal effects comparable to those of washed drawings.3

The extremely rare Self-Portrait Drawing was not executed in this technique, but carefully drawn in the layer of wax on the copperplate with a very thin etching needle. It depicts the young artist seated at a table, his face illuminated by a single source of light hidden from view. The play of light at the tip of the nose, the rim of the hat and especially around his eyes is convincingly rendered with small dots and dashes, betraying the working method of a silver- and goldsmith. To emphasize the chiaroscuro effect, the artist worked up the impression with graphite, darkening the shadowy parts of the composition, such as the left side of his face and his left shoulder and arm. Moreover, he made corrections to the scarf, draped nonchalantly around his neck, and the right side of his hat. These changes in graphite seem to have been partially implemented by the artist onto the copperplate in a subsequent state.4

Both in style and in the type of this true-to-life portrait, the print is clearly indebted to Rembrandt. It immediately calls to mind the master’s Self-Portrait Etching at a Window of 1648.5 Both artists depicted themselves drawing or etching, using a mirror to truthfully capture their likeness. A recently acquired self-portrait by Samuel van Hoogstraten (1627-1687), one of Rembrandt’s pupils in the early 1640s, shows the artist drawing at a table as well (see cat. no. 44). Although there are no documents confirming that Lutma apprenticed under Rembrandt, the artist probably knew the master and his work through his father.6 Inspired by the latter, Lutma represented himself as a skilled draughtsman, looking in the mirror with confidence. Unlike Van Hoogstraten’s self-portrait, the etching is not a drawing exercise, but an individual work of art, displaying to the world Lutma’s talents as an artist. MR

4Impressions of this later state, with the copperplate trimmed below and with traces of wear throughout, are in Amsterdam, Rijksmuseum, inv. no. RP-P-1889-A-15064; and London, British Museum, inv. no. 1843,0513.529; see https://www.rijksmuseum.nl/nl/zoeken; and www.britishmuseum.org/research/collection_online/search.aspx.

10Impressions of this later state, with the copperplate trimmed below and with traces of wear throughout, are in Amsterdam, Rijksmuseum, inv. no. RP-P-1889-A-15064; and London, British Museum, inv. no. 1843,0513.529; see https://www.rijksmuseum.nl/nl/zoeken; and www.britishmuseum.org/research/collection_online/search.aspx.