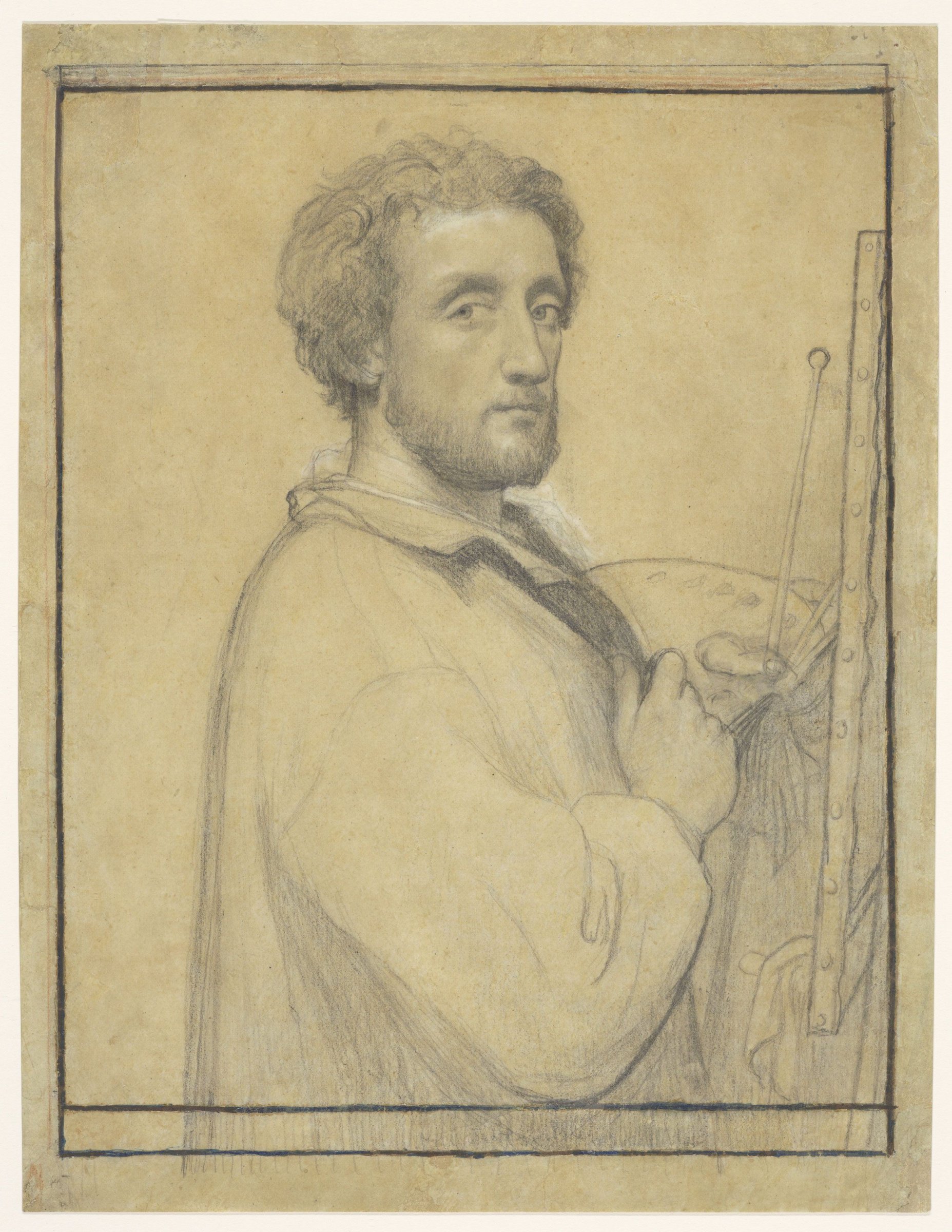 A pupil of Auguste Flandrin (1804-1843) in Lyon, Louis Lamothe settled in Paris in 1839 and entered the studio of Hippolyte Flandrin (1809-1864), another member of this renowned family of artists. He also spent two years as an apprentice to Jean-Auguste Dominique Ingres (1780-1867). This drawing, done in pencil, the technique the Neoclassical master was so fond of for his portraits, attests to this stylistic filiation.

This practice of a self-portrait with an easel recalls the composition processes wrought by the Italian Renaissance painters. The representation is poised between realism – the painter’s tools, palette and hand-rest, his work smock, the canvas nailed to the edge of the stretcher – and idealism – his right hand is not wielding the brush on the canvas but resting, closed, on his breast, as though the artist were posing. The careful modelling of the face – rendered with stump and white gouache, which contrasts with the sketchier treatment of the rest of the body and the attire – is indicative of Ingres’ teaching. The gaze and the expression, marked with a certain formality, exhibit the image the artist wished to convey of himself: at the time he was about thirty-three years old, and already sustained by his experience as a painter of important decorations with the Flandrin brothers.1 Our drawing should be coupled with a self-portrait painted in 1859,2 which it directly prepared. In the painting Lamothe retained the pose and his serious expression, but omitted the easel and altered the position of his right hand, placing it on his hip. In its composition, albeit reversed, the drawing also displays a great affinity with the double self-portrait of Hippolyte and Paul Flandrin, dated to 1842,3 of which he borrowed the motif of the canvas seen from the side, showing only the nails on the stretcher. Both in substance and form, Lamothe’s self-portrait on paper can thus be interpreted as a tribute to his different masters. Attesting to their close bonds with their pupil and collaborator Lamothe, the Flandrin brothers had also acknowledged him in the same way in painted or drawn portraits on three occasions.4

This drawing is the first by Lamothe to enter the Fondation Custodia collections, but the artist was not totally absent from its holdings before that, as it already possessed several letters addressed to him from Hippolyte Flandrin. MNG