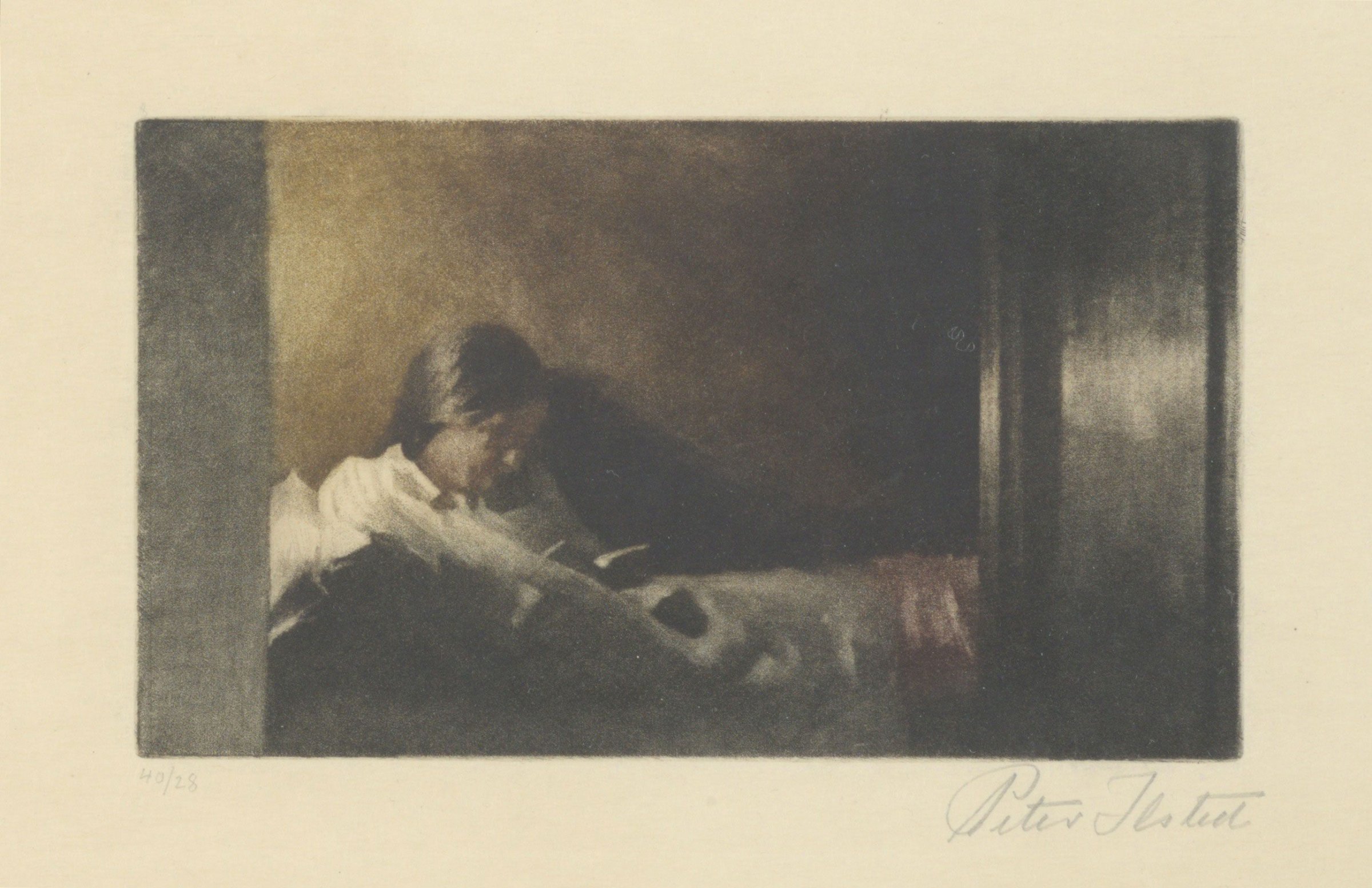 The Danish painter Peter Ilsted was a highly gifted engraver.1 After studying at the Fine Arts Academy of Copenhagen between 1878 and 1883, he specialised in genre paintings and portraits.2 In 1891 his sister Ida (1869-1949) married the painter Vilhelm Hammershøi (1864-1916). The latter’s oeuvre deeply influenced Ilsted’s work: we observe the same bare interiors in monochrome tones, often with a figure seen from behind, as in his brother-in-law’s paintings, even if Ilsted used more pronounced colours and his interiors are less austere.

More conventional in his paintings than Hammershøi, it is above all in his graphic works that Ilsted proved himself an innovator. In the 1880s he first engaged in etching, doubtless inspired by seventeenth-century Dutch prints, particularly Rembrandt, which he collected.3

As of 1906, Ilsted began his experiments with the mezzotint technique, a printmaking process rarely practiced in the early twentieth century in Denmark. He studied English mezzotints, and even began collecting them.4 Ilsted often printed his mezzotints in colour à la poupée, a technique that involves inking different areas on the plate by hand with a bundle of fabric, which allows for the use of several colours. This is a painstaking process, as the colours must be kept from mixing, and it has to be repeated for each run under the press. These truly singular coloured prints were highly sought after in his day.

Here the artist depicted one of his daughters, in bed, reading, seen through a partly open door which frames the scene on the left and the right.5 The title, “Lille Rekonvalescent”, tells us that the little girl is convalescing after a sickness.6 With browns, greys and blacks in harmonious tonal shades, Ilsted created an intimate atmosphere. We only make out a small part of the interior, and the lamp, whose glow we can see, is not visible. This close framing is unusual for the artist, who mostly did views of vaster interiors. Moreover, the painting with the same subject after which Ilsted did this print shows more of the interior: we not only see a picture hung above the girl, but also the door on the left onto which a shadow is cast, and the wall to the right of the door.7 RSB

6Title given in Copenhagen 1924, op. cit. (note 1), mezzotints opus no. 24. According to this publication the print had an edition of 40, all printed in colour and numbered (this impression bears number 28).