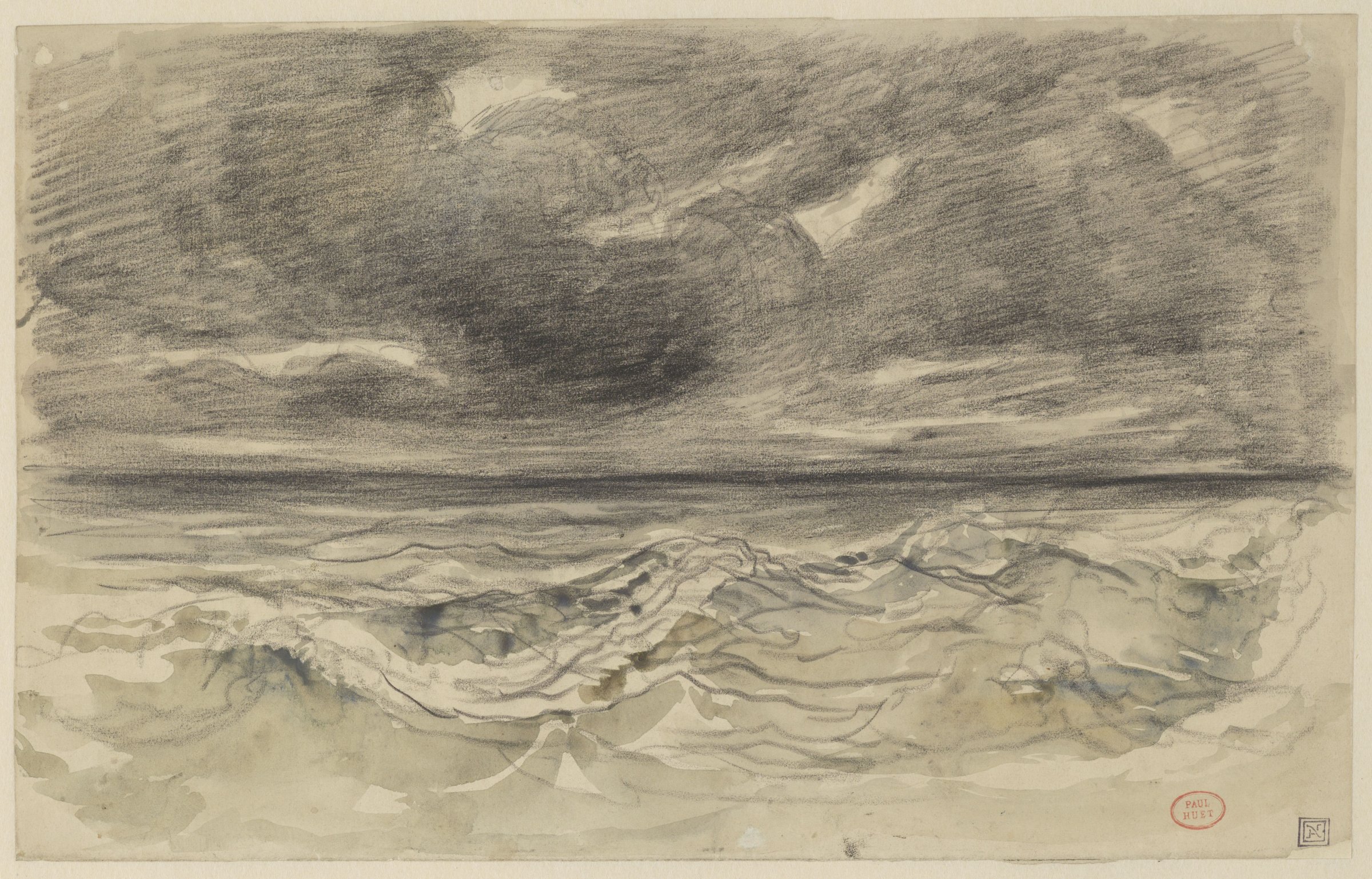 Paul Huet can be considered one of the major inspirers of the Romantic landscape.1 Trained since his youth to draw in nature, he subsequently entered the studios of Pierre-Narcisse Guérin (1774-1833) and then Jean-Antoine Gros (1725-1790). His innate sensitivity is expressed in his paintings as well as his watercolours and etchings, all of which display a distinct affinity with the works of English artists such as William Turner (1775-1851) and John Constable (1776-1837).2 And it was with another artist from across the Channel, Richard Parkes Bonington (1802-1828), that Huet formed a friendship, developing a fruitful artistic exchange when working outdoors in Normandy in 1828.3

While the artist was particularly receptive to the English landscape conception and its expression through the technique of watercolour, he still managed to retain his own artistic personality. In our drawing, in particular, he differed by boldly associating watercolour and charcoal, media that both allow for swift execution. Here the line is no longer consigned to the sketch prior to the application of the watercolour, but instead plays an equal part with the brush in an almost musical way. Structured by the skyline at mid-height, the composition is founded on an effect of symmetry between the tumultuous waves – suggested by charcoal strokes and watercolour – and the threatening sky, wherein masses of clouds are rendered by tense, emphatic hatching, heightened in light grey watercolour. But it is perhaps in the way he spared the white of the paper to create gaps in the clouds or foam on the crest of the waves that Huet displayed his expert ability to swiftly sum up nature in motion.4 The absence of an inscription or any hint of a localisation makes it difficult to identify exactly where Huet could have observed such a wild sea, but it was probably a view taken on the Normandy coast, one of the artist’s great sources of inspiration. A similar palette blending greys, blues and greens, as well as a comparable handling of light, can indeed be found in the coastline landscapes he immortalised near Honfleur or Ėtretat. As for the eminently Romantic theme of the stormy sea, it appears in several of Huet’s works: for example, his Great Equinoctial Tide near Honfleur,5 dated 1861, or again in the Storm over the Sea near Nice, a watercolour dated to 1839. The latter, like our drawing, previously belonged to the collection of Alfred Normand.6

Paul Huet is a well-represented artist in the Fondation Custodia collections; the institution holds six of his drawings in various techniques. Within this ensemble, our recently acquired seascape is distinguished by its freedom and spontaneity. Therein it can be compared to a sheet of watercolour sky studies7, evidence of analogous experiments by the artist, seeking effects to express in merely a few brushstrokes the fleetingness of light or the transience of clouds.8 MNG

4“How I aspired., my imagination being struck by the immensity and the might of Nature, to render these great spectacles that it constantly unfolds before our eyes, to express the emotions that the sight of its mysteries, the charm and the melancholy of its abysses arouse in us,” Huet wrote in his notes, quoted by Maréchaux Laurentin et al. 2003, op. cit. (note 2), p. 14.