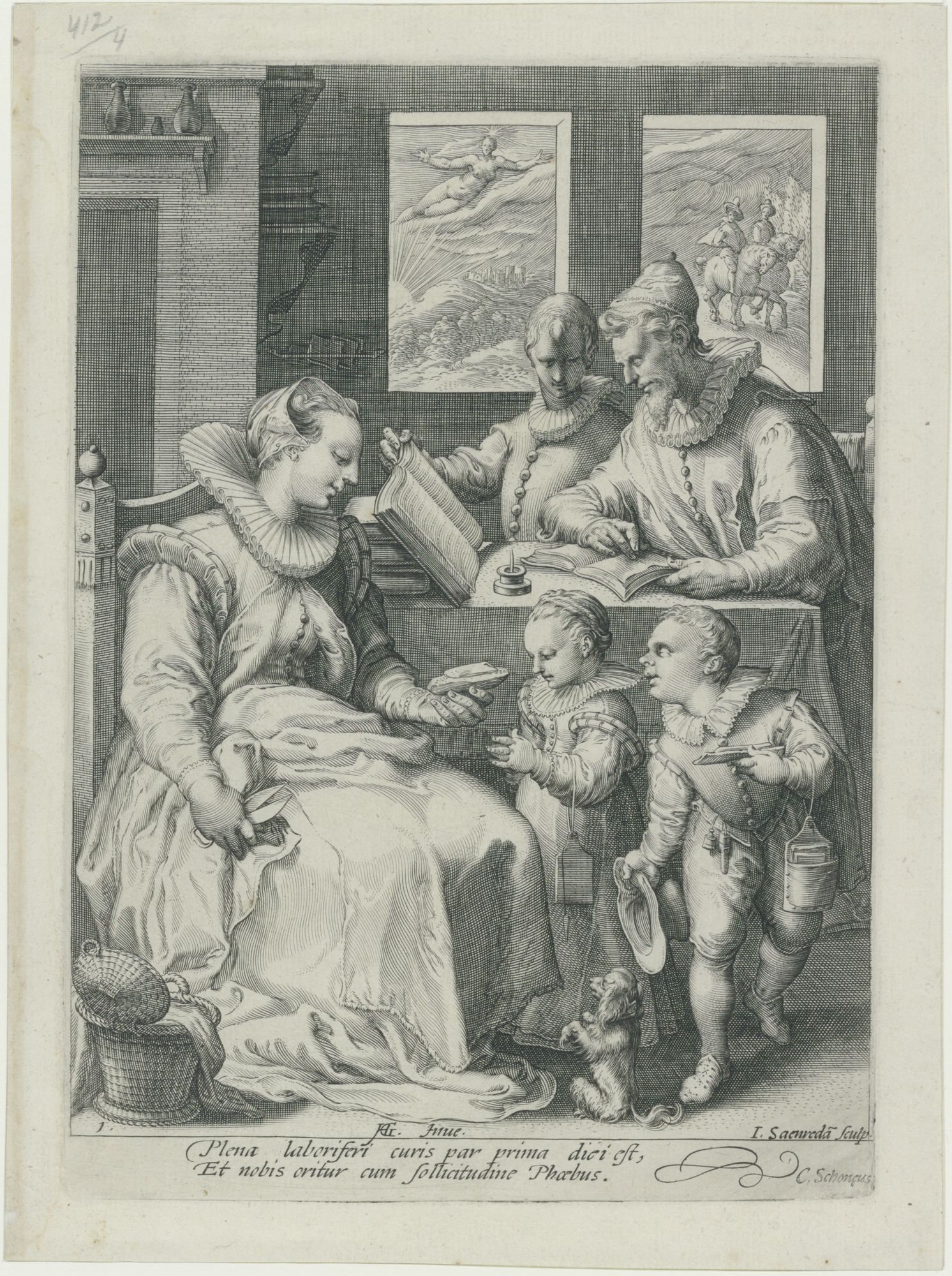 The morning ritual taking place in the foreground differs little from what many families do nowadays. Before the two children leave the house, the girl is given a piece of bread and butter to make sure she does not go out with an empty stomach. Less obvious, from today’s point of view, is the gratitude for the piece of bread the girl expresses by folding her hands in prayer. She and her brother are just about to go to school, as we can see from the slate hanging from her arm and the boy’s school bag. Behind them the father and an older son are immersed in books. The mother is about to pick up her needlework again. This family scene represents Morning in a set of the four times of the day.

Hendrick Goltzius gave the subject a very mundane look, and the only remnant of the more allegorical pictorial language previously found in such sets can be seen through the window. The personification of Aurora, the goddess of dawn, adorns the heavens. In the depiction of the other times of the day, the classical figures of Meridies, Vespera and Nox likewise play a subordinate role.1 Afternoon focuses on people at work, in Evening a company sits at a table and the Night scene alludes to the approaching bedtime. Goltzius played a major role in renewing this iconography, replacing the allegorical interpretation of the Four Seasons, the Four Elements and the Five Senses with genre scenes.2

The inventiveness of these designs must be credited to Goltzius himself, but the collaboration of talented engravers trained by the artist was indispensable to the printmaking trade in Haarlem. This set was made into prints by Jan Saenredam, who followed Goltzius’s design very faithfully. The alternation between cross-hatching and parallel and wavy lines produced a clear and sharp image, in which domestic harmony, gratitude, industry and the eagerness to learn take centre stage.

1The engraver seems to have made a mistake when he numbered the four prints. The numbers lower left give the illogical order Morning, Evening, Afternoon, Night.

2See Veldman 1991-92; The four times of the day as a set was only popular for a short period of time. There were only two engravers who preceded Goltzius; in 1582 Johann Sadeler engraved the series after Dirck Barendsz, as did Adriaen Collaert after Maerten de Vos, c. 1590-1597. In 1601 Jacob Matham also published the set after Karel van Mander, and Jan van de Velde published his series in 1616.