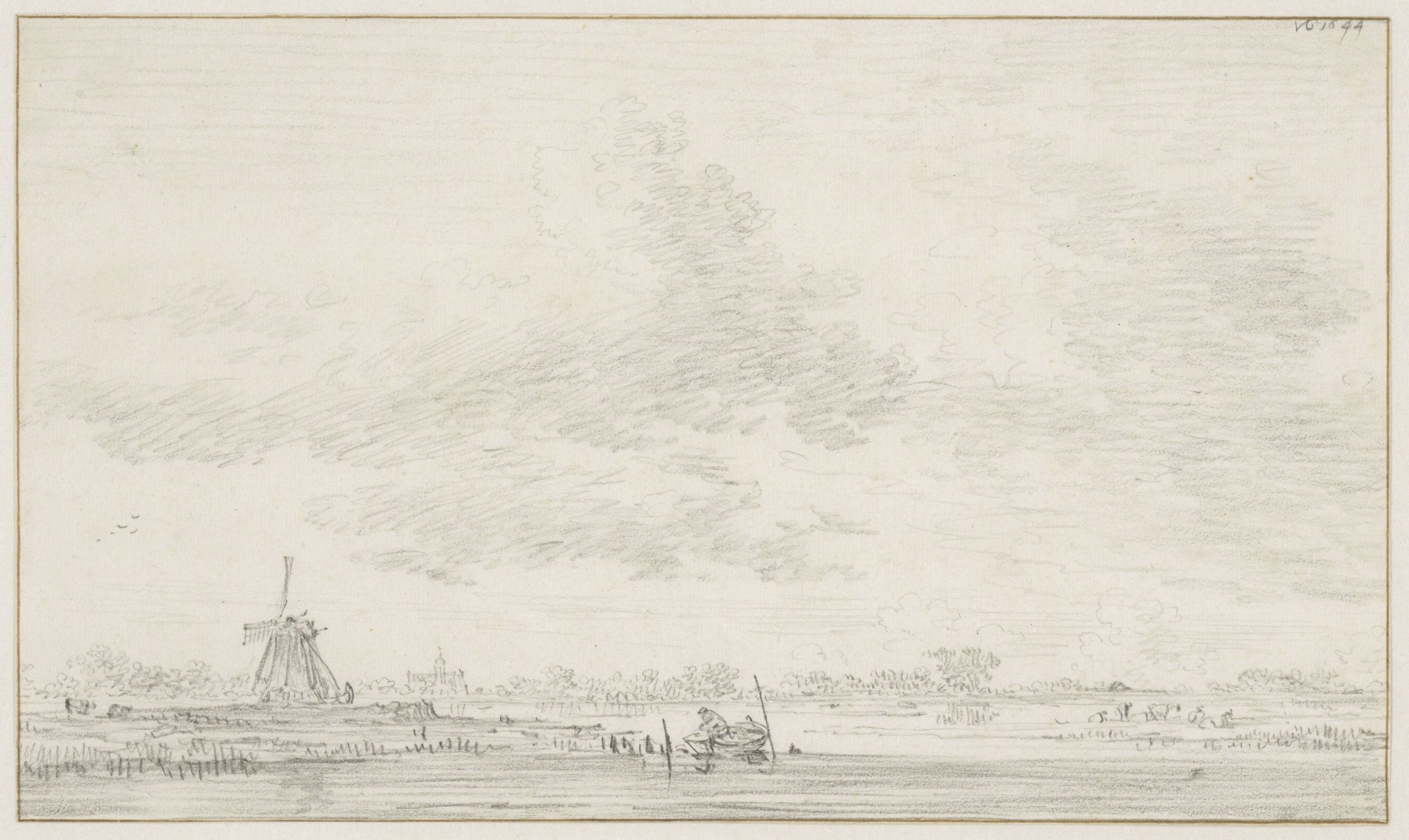 The Dutch landscapist Jan van Goyen completed his studies in the Haarlem workshop of Esaias van de Velde (1587-1630), one of the pioneers of a more naturalistic manner of depicting the landscape that emerged during the first quarter of the seventeenth century. Van de Velde, along with his nephew Jan van de Velde II (c. 1593-1641) and Willem Buytenwech (1591/92-1624), broke with the tradition of anecdotal landscape art practised by earlier painters and started to experiment with diagonal compositions, low horizons and a focus on the landscape itself.

Although River Landscape with a Mill was made more than two decades after his apprenticeship to Van de Velde, the influence of his master can still be seen. Van Goyen used black chalk, a medium that was frequently applied by Van de Velde as well. Only for this drawing the artist worked with a particular sharply cut piece of chalk. With vigorous pointy lines he drew the vegetation in the foreground and the outlines of the fisherman in his boat. Moreover, he chose to depict a low horizon. The landscape here covers less than twenty-five percent of the sheet; even in Van Goyen’s oeuvre this is exceptional. Large cumulus clouds, recognizable by their white, fluffy tops and flat bases, take up most of the composition. The effect is overwhelming, emphasising the awe-inspiring expanse and extreme flatness of the Dutch landscape.

Throughout his life Van Goyen travelled extensively across the Dutch Republic, the Southern Netherlands and to the Rhine region, taking with him pocket-sized sketchbooks and pieces of chalk to record his visual experiences. These sketches served as models for his paintings and for larger, more finished drawings like the present sheet which he made for the open market. On 15 May 1644, the same year in which River Landscape with a Mill was made, Van Goyen began using a new sketchbook, known today as the Bredius-Kronig sketchbook.1 It contains sketches of buildings, villages along rivers, views, dune landscapes and anything else that caught his eye during his travels throughout the provinces of North and South Holland. The landscape in these drawings, especially in the views of the environs of Haarlem, resembles the flat watery landscape in the present sheet.2 Probably for this reason, the drawing was formerly described as a view near the Haarlemmermeer with the church of St. Bavo in the distance.3

However, there is not enough evidence to support this assumption. Compared to a view of Haarlem with the same church in the sketchbook, the belltower in the present drawing looks much too round.4 Other famous Haarlem landmarks, such as the towers of the Bakenesserkerk or the town hall, are also missing from the almost desolate landscape. It is more likely that the sheet depicts an imaginary river landscape, executed in Van Goyen’s studio and roughly based on the images in the artist’s sketchbook and his own memories, which would still have been fresh from his recent travels. MR

Monogrammed and dated, upper right, in black chalk: “VG 1644”. Inscribed on verso, lower right, in pencil (with the lot number of the Robiano sale): “379”