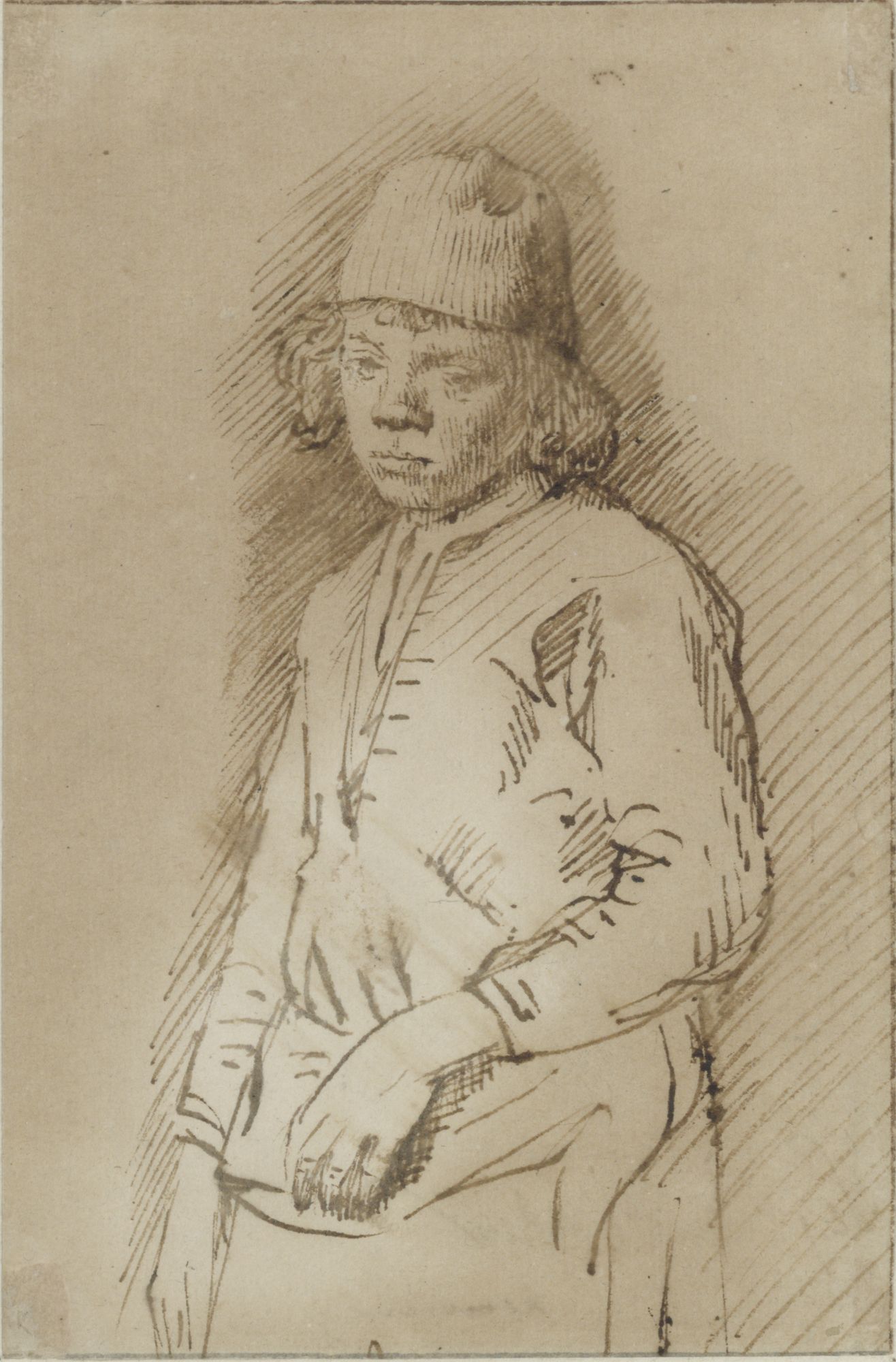 Constantijn van Renesse was a member of the upper class and at the age of thirteen began to study literature in Leiden, later devoting himself to mathematics. As an amateur he drew, painted and etched and, from time to time, made trips to Amsterdam to take lessons from Rembrandt van Rijn (1606-1669). We know that he spent some time in Rembrandt’s workshop around 1649.1 Even after had been appointed town clerk of Eindhoven in 1653, he visited Rembrandt once more around 1661. Some of his drawings have inscriptions that allude to this training and others were unmistakably worked on by the master.2 This sheet shows no corrections by Rembrandt, but is close to his own drawings. Frits Lugt actually thought that it was by Rembrandt himself.3

Peter Schatborn attributed the sheet to Constantijn van Renesse on stylistic grounds,4 also observing that the boy depicted frequently features in the artist’s drawn oeuvre.5 Here he is posed in a somewhat awkward position, his arms slightly bent and his chin lowered. Four figure studies preserved in Amsterdam show the same model, in academic poses, and wearing an identical cap to the one he has on here.6 The similarities in physiognomy and the mid-length hair are even more striking, however, in a drawing in Darmstadt.7 In that drawing the boy sits on the ground against a wall in the midst of other artists who are drawing from a live model. The lad’s presence there, much like the clothes he wears in this drawing (the cap, an apron and a jerkin), point to his role as an apprentice, probably in Rembrandt’s workshop.8

In the year Lugt bought this drawing, he also acquired a later print made after this sheet – as far as we know a unique impression.9 It is accepted that it was made by Johannes Pieter de Frey (1770-1834). Why he added the initials IL, those of Jan Lievens (1607-1674), to the print is unclear. By then, it had evidently already been forgotten that Constantijn van Renesse was the draughstman.

3“onbegrijpelijkerwijze als ‘attribué à’” (“incomprehensibly as ‘attributed to’”) Lugt wrote on the inventory card, which underlines his mystification about the uncertain attribution to Rembrandt. In Lugt’s view, this drawing showed the strong influences of Andrea Mantegna (1431-1506) on Rembrandt’s drawn work.