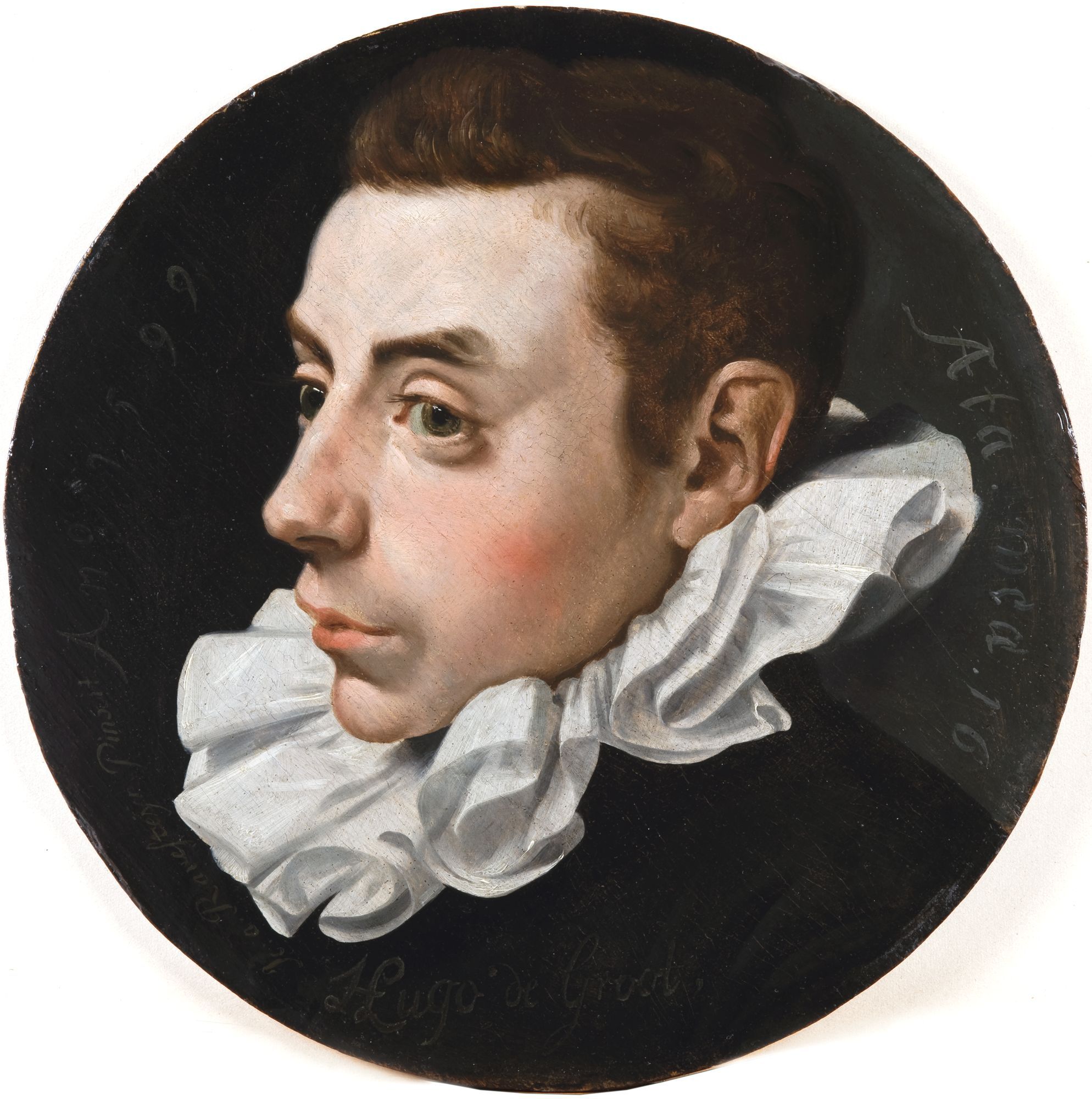 From the great height of his sixteen years of age, this very young man already possesses the face of an adult. It is true that in the seventeenth century life expectancy was much shorter than it is today, and people started working from a much younger age. However, the model for this portrait is an exceptional and especially precocious character. The serious, pensive gaze, lost in thought, belongs to none other than Grotius, the Latin name for Hugo de Groot (1583-1645), one of the greatest intellectuals of the Dutch Golden Age.1 He was a jurist. Known as the father of international and maritime law, his work is still studied in universities. In 1599, the ‘Dutch Miracle’, as he was nicknamed in France, had recently returned from a diplomatic mission to King Henri IV (1553-1610) when this portrait was painted. During his stay in France, he received a doctorate from the University of Orleans – having already defended two doctoral theses at the University of Leiden by the time he was fourteen years old. On his return from France, Grotius set up as a jurist and lawyer in The Hague and began his brilliant career.

He probably knew the painter Jan van Ravesteyn, whom he entrusted with the task to paint this portrait.2 Four years later, Grotius commissioned a second portrait from him, which was engraved and widely distributed. The second likeness is much more conventional than this painting, whose circular format, a tondo, and the very close-up presentation of the model, evoke the art of the medals of Antiquity. However, Hugo Grotius is not seen in profile, but from a three-quarter view, turning his intense gaze away from the spectator, which lends the painting a certain informality. The pose was an unusual choice for a portrait painted in 1599, as unusual as the Mannerist stylisation of the model’s brows and eyelids.3 The painting is the first known work by Jan van Ravesteyn who, for several decades, was the most important portrait painter in The Hague. He was the recipient of many large commissions, specialising particularly in group portraits of militias, a genre that was typical of the young Republic of the Low Countries.

There is a long gap between this portrait and other paintings by Van Ravesteyn, a hiatus not yet explained by art historians. Ten years passed, during which the artist moved from this unusual format to much more conventional representations, perfectly attuned to the age in which they were painted.

Signed and dated to the left: Jo: a. Ravesteÿn Pinxit Ano. 1599; inscriptions to the right: AEta. meae. 16; and below: Hugo de Groot

1Hugo de Groot is such important a personality for the Dutch Golden Age that this portrait was on loan to the Amsterdam Rijksmuseum for its reopening in 2013 where it remained until 2016.