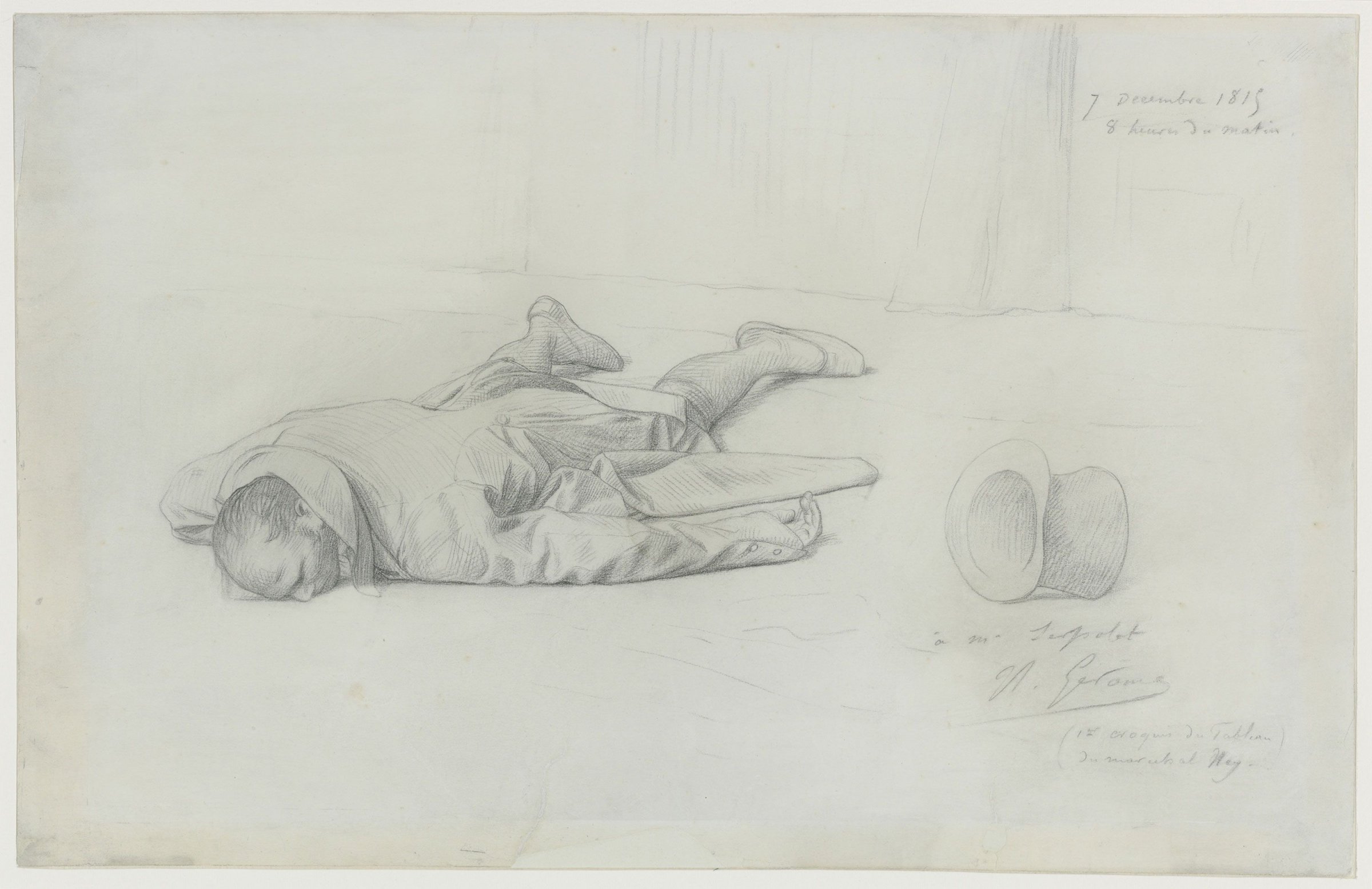 On the morning of December 7, 1815, Marshal Ney was executed near the Luxembourg Gardens, having been sentenced to death by Parliament for having “plotted for the return of the Emperor”.1 This decision, made under pressure from the English, followed the defeat at Waterloo. In a retrospective painting2 shown at the Salon of 1868, Gérôme paid tribute to the Napoleonic figure, wishing to rehabilitate his memory. The scene catches the instant immediately after the firing squad withdraws, leaving the condemned man lying dead on the ground. The similarity of this composition to that of another picture by Gérôme, The Death of Julius Caesar,3 underlines the convergence of the artist’s intentions: in both cases, he is presenting us with the cowardly assassination of a great man.

The desire to narrate a historical event in its crudest reality belongs to the “Positivist ethos”4 of Gérôme’s time. Indeed, the artist relied on the story of the event published by Vaulabelle in 1860.5 This naturalistic approach, however, was poorly received when the painting was shown at the Salon; the image of a Marshal of France lying in the mud next to a run-down wall was considered an insult to his memory.6 Yet what Gérôme did here was invent a new, dramatic, almost documentary language; to record a single human destiny from the viewpoint of History.

Annotated “1er croquis”, our drawing only focuses clearly on the Marshal’s body lying face down on the ground, his hat fallen by his side, without any other localisation than the bottom of a wall. Even the line of the ground is only suggested by a light shadow edging the outlines of the body. The main subject of the painting, occupying the foreground on the right, was thus treated in a separate preliminary study, very carefully done, that the artist would integrate into his composition without substantial changes. A pupil of Ingres (1780-1867), bent on a clear line, Gérôme drew the contours with a sure and flowing stroke, while as usual he constructed the volumes with distinct parallel hatchings or cross-hatchings. The meticulously described folds of the frock-coat make the weight and texture of the cloth covering the corpse seem tangible. But the true strength of the drawing lies in the bold foreshortening of the Marshal’s body, a visual effect also utilised in the preparatory study for The Death of Julius Caesar.7 So, despite the ellipse of the rest of the setting, Gérôme succeeded in creating a stunning background depth and three-dimensionality.

The artist’s academic training explains the huge importance of drawing in his creative process – as a preparatory stage for each painted composition, but also as a means to faithfully note his observations, as his many sketchbooks attest.8 Similarly to the other known preparatory study for this painting, cited by Gerald M. Ackerman, our sheet bears a dedication. Indeed, the artist often offered drawings to his relatives or friends.9 MNG

5It describes in particular the outfit the Marshal wore that day: “We have said that he was in mourning for his father-in-law: he was wearing a morning-frock in coarse blue cloth, breeches and black silk stockings, as headgear a round hat”; see Achille de Vaulabelle, Histoire des deux Restaurations: jusqu’à l’avènement de Louis-Philippe de janvier 1813 à octobre 1830, 8 vols., Paris 1860, vol. 4, p. 120.

6The artist accurately illustrates this passage in Vaulabelle’s narration: “In conformity with military regulations, the body was left for a quarter of an hour on the site of the execution”; see ibid., p. 121; and Des Cars and De Font-Réaulx 2010-2011, op. cit. (note 4), no. 93.

7Washington, National Gallery of Art, The Ailsa Mellon Fund, inv. no. 1991.187.1 (graphite; 167 × 326 mm. Signed, lower right, in pencil: “JL Gerome”); see ibid., under cat. no. 67, note. 2; and https://www.nga.gov/Collection/collection-search.html. Gérôme also used it for the figures of the plague-stricken painted in 1854 in the Saint-Jérôme chapel of the Saint-Séverin church in Marseille; see ibid., p. 124. This motif probably originates in the pseudo-Velázquez painting depicting a dead soldier, formerly in the Pourtalès collection, that Gérôme had seen before it was auctioned (see cat. no. 84); see ibid., under cat. no. 67, note. 3.