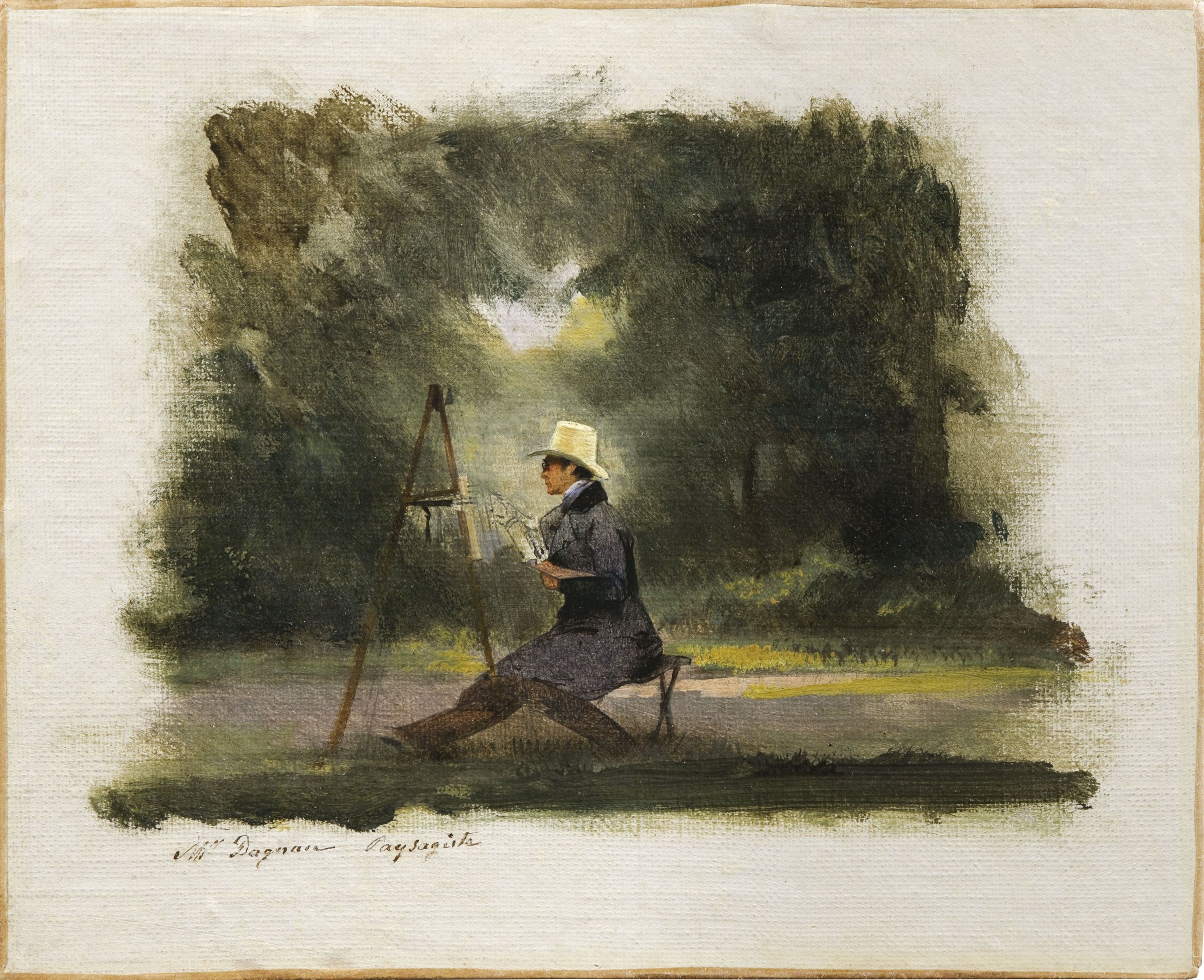 Edme-Adolphe Fontaine began his training under Léon Cogniet (1794-1880) (see cat. no. 13 and 14) at the École des Beaux-Arts in 1838, working with him on the decoration of the Madeleine Church in Paris. He exhibited regularly at the Salon and, from 1845 onwards, taught drawing at the École de Saint-Cyr. A painter of portraits, historical and military subjects, and views of interiors, he was also a talented landscapist, just like his master. Our small canvas (see cat. no. 33), an exception in his corpus, enchantingly documents the practice of open-air landscape painting, at the time followed by the artists of the Barbizon School.

Isidore Dagnan (1794-1873), portrayed here, was one of the first to frequent the Auberge Ganne at Barbizon, whose other notable guests included Claude-Félix-Théodore Caruelle d’Aligny (1798-1871), Paul Huet (1803-1869), François-Louis Français (1814-1897) and then later Camille Corot (1796-1875) – artists all particularly well represented in the Fondation Custodia collection of drawings and paintings. Fontaine must have accompanied Dagnan during an excursion on the motif, but chose to take his comrade as his subject instead of the landscape before him.

In just a few brushstrokes on a canvas coated with only a light priming, he caught the painter’s features and posture: elegant in his frock-coat and hat, seated on a folding stool. The limited palette of greens and greys, which the artist applied by scrumbling, is brightened with touches of yellow and ochre. An attractive contrast is created between the highly suggestive treatment of the wooded landscape – an effect even emphasised by the spared area around it – and the care devoted to the painter’s face. A sheet of studies (see cat. no. 32), also acquired by the Fondation Custodia, reveals that Fontaine handled this detail with particular care: here Dagnan is caught in three different postures, his head more or less bent forward, the shadow of his hat gradually concealing his eyes and the rest of his physiognomy. The study at the top of the sheet, the most finished, is the one the artist kept in his painted composition. These sketches from life, along with the underlying drawing of the easel on the canvas – betraying the artist’s pentimento –, thus show that this small spontaneous portrait required a definite preparation. However, its unfinished character and the friendly inscription that accompanies it make it a private work, which Fontaine kept in his studio, apparently without intending to develop it into a more ambitious composition. We can assume the same thing of another of his drawings, representing his wife Marie Fontaine (1816-1877), also an artist, working outdoors surrounded by curious onlookers.1

The genres that Frits Lugt was particularly fond of included landscape and representations of artists at work, in portraits or self-portraits. This charming picture by Edme-Adolphe Fontaine, depicting a painter at his easel, brings these two worlds together. MNG

The artist’s studio collection. Gallery Day and Faber, London; from which acquired by the Fondation Custodia, 2014 (inv. no. 2014-S.39)