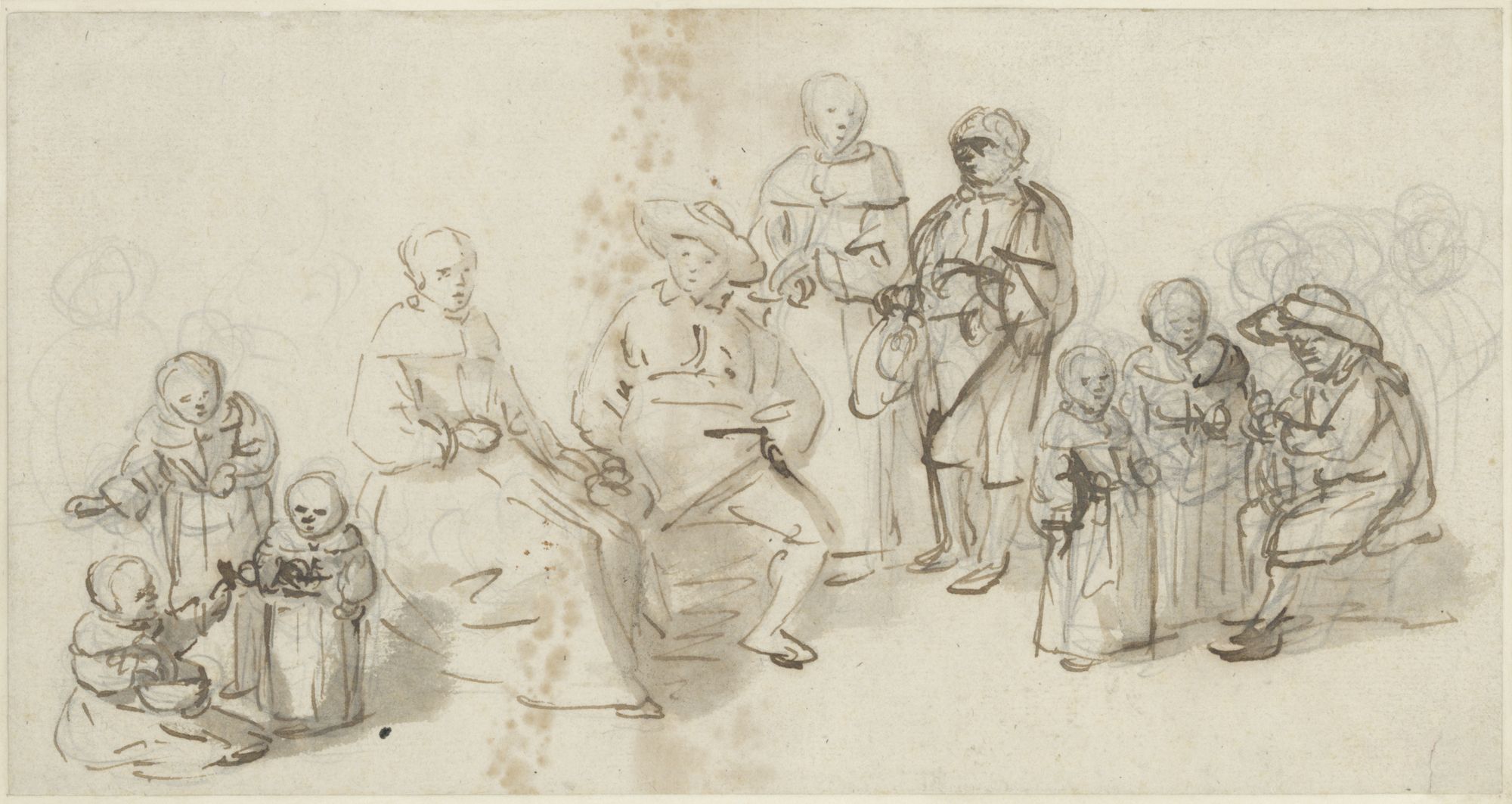 When Frits Lugt acquired the first of these three drawings by Adriaen van Ostade in 1923, he wrote ‘It is remarkable how Ostade kept changing their grouping’ on its inventory card.1 He was evidently already aware of the existence of the other versions – he may have seen one owned by Henry Oppenheimer (1859-1932) in London in 19192 – and clearly remembered that the artist had grouped the family differently in each case. It was not until 1936 that Lugt acquired all three drawings (see cat. 33 and cat. 34) and was able to examine more carefully the changes Van Ostade had made. When the three sheets are placed side by side, it is as if one is looking over the artist’s shoulder as he searches for the best composition; one in which he probably wanted to bring out the closeness of a loving family, but at the same time maintain the formal character of a family portrait. The father and mother are always shown in more or less the same place and their poses remain the same. As for their offspring, the artist moves the groups of children around in the three sheets and plays with their interactions.3

That the achievement of a composition with the desired dynamic between the sitters was by no means a simple task is apparent from these various preliminary studies. It is also made clear by the manner of drawing. Van Ostade began by indicating the presence of the figures with an abundance of loose strokes in graphite – no more than a rough indication of their place in the scene. It was only after this that he went over some of these lines in pen and ink to crystallize the various poses – all the while taking into consideration the children’s different ages. In one of the sheets it is clear that Van Ostade was wrestling with this; over his first attempt he drew the boy in the centre a head taller to get him ‘to match’ his sister on his left, or to bring him closer to her in age.4

Van Ostade’s painted end result was later acquired by Louis XVI (1754-1793) and is now in the Louvre.5 In it the artist seems to have abandoned the results he achieved in these three preliminary studies. Here is yet another arrangement – the parents’ change of position is immediately striking – making it quite conceivable that the artist had made further studies on paper. He certainly must have done so for some of the individual figures.

We do not know the identity of this family. It was long thought that it was Adriaen’s own family, but that idea has now been ruled out.6 Only one other group portrait by him is known, that of the De Goyer family.7 Van Ostade may have felt more familiar with the depiction of peasant companies in an inn or in the open air, for which he also made numerous studies from life.8

3In one of the drawings Van Ostade even appears to have lost count of the number of children and drew nine instead of eight (inv. no. 5037).