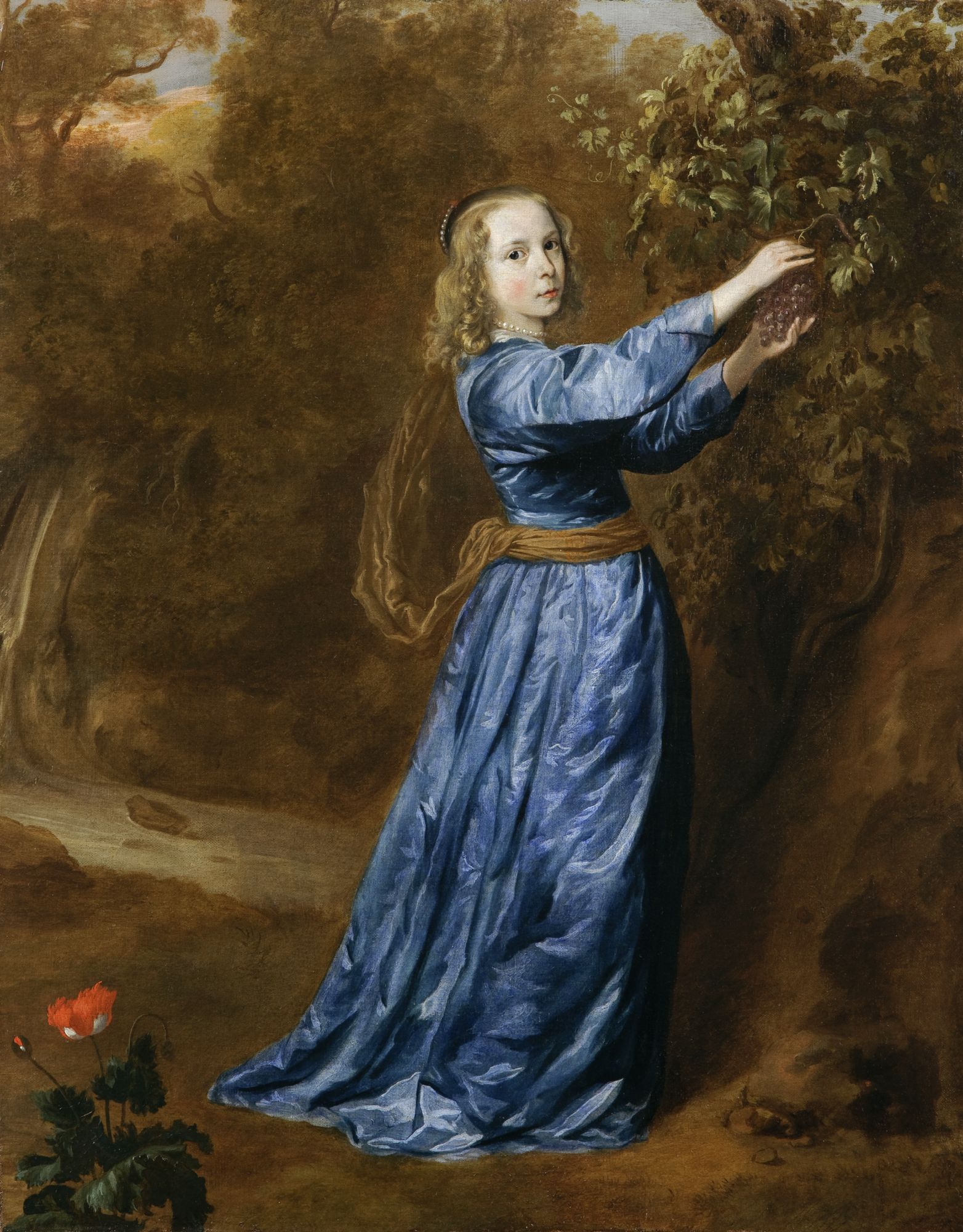 At the edge of a wood, by a stream, a girl aged about ten interrupts her grape-picking to gaze at the spectator. This elegant setting is typical of the portraits of Johannes Mijtens, a painter from The Hague who enjoyed a successful career among the aristocracy and upper classes of the Northern Netherlands. He frequently placed his models in a landscape, as he does here, hinting at the ownership of a large estate as well as offering the freshness of a natural setting. Many families had their portraits painted in rustic surroundings by Mijtens. His group portraits are characterised by the full-length representation of the models. He has repeated the format in this individual portrait of a young girl, which is very unusual in his work.1

In a celebrated article on the symbolism of the grape in sixteenth and seventeenth-century Dutch painting, Eddy de Jongh interprets the gesture of the girl picking (or holding) a bunch of grapes as a symbol of the innocence and purity of the model.2 Alexandra Nina Bauer, on the other hand, author of the monograph on the painter, emphasises that the motif recurs frequently in the portraits painted by Mijtens at the beginning of his career and that bunches of grapes are held indiscriminately by even younger girls, women and also by boys. According to her, this could be a decorative element suggesting an élite rural pastime enjoyed in the same way that fruit-picking and hunting were enjoyed, activities also represented in these portraits.3

With regard to the poppy – partially truncated4 – seen growing in the left-hand foreground of the painting, this flower frequently appears in portraits of children and families painted by Johannes Mijtens throughout his career.5 The poppy appears to symbolise fertility in general and that of the young girl’s family in particular.6

Unfortunately, we do not know the identity of the girl, but the fact that she belongs to a wealthy family of the upper class is not in any doubt. Her fine dress of blue silk or satin, as frequently sported by models in elegant portraits, is from the realm of fantasy. The cut of the dress is reminiscent of the gowns worn by women in the 1640s, although very simplified. The lace collar and chemise7 are lacking, and their absence lends a pastoral air to the clothing. The girl’s hairstyle on the other hand is characteristic of the 1640s in all respects.8 These attempts at dating are supported by figures of young girls presenting similar clothing and poses in family portraits executed by Johannes Mijtens in 1638 and 1649. This portrait of a single individual model is probably the first of its kind for the artist.9

4The canvas must have been cut along the left side and the lower part as the poppy plant and the rushing stream are now incomplete. See Nihom-Nijstad 1983, no. 53, p. 87.