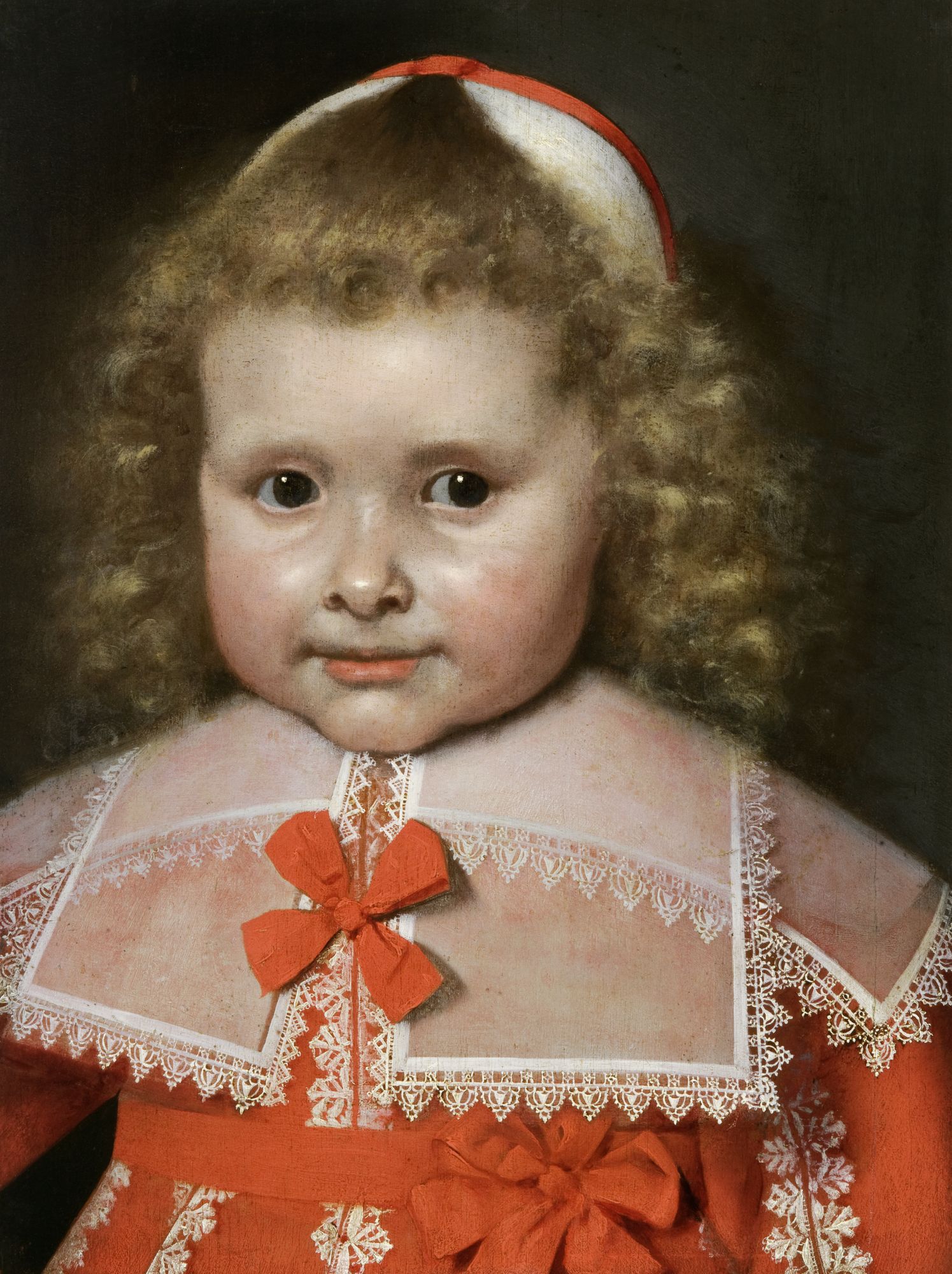 Unlike the other painted portraits of children belonging to the Fondation Custodia, each showing the young models full-length, this portrait presents a small girl half-length, a much more common format in the seventeenth century, and of course less expensive. Unfortunately, we do not know the identity of the owner of this little face, with its piercing black eyes not quite engaging with the spectator. The child’s dress makes it possible to date the portrait to the 1630s. The ribbon rosette worn on the belt was a very fashionable accessory at this time,1 as was the high-waisted dress.2 The batiste collar bordered with fine lace consists of two parts: the first, called rugkraag in Dutch, extends from one shoulder to the other and covers the upper part of the back; the second, the neerstik, was worn over the first one and its two ends extended to the chest.3 The lace collar was an essential feature of seventeenth century dress; the quantity of lace determined the quality of the collar.

The catalogue of the Sotheby’s sale in 1923, where Frits Lugt bought the painting, suggested it should be ascribed to the Dutch School of the seventeenth century. In his inventory, the collector has noted ‘manner of Jacob Gerritsz. Cuyp’. This Dordrecht painter, born in 1594 and who died in 1654, is less well-known today than his son, the celebrated landscape painter Aelbert Cuyp (1620-1691), but he was one of the best artists in his town. He painted still-lifes, genre scenes and history paintings, but stood out particularly for his portraits (see cat. 16). His oeuvre includes a number of likenesses of children for which he seems to have been much in demand. These portraits, however, are often very different from the painting exhibited here. Usually depicted outside, the small models are shown full-length in most of them. We do know of some exceptions, such as the portrait of a very young boy now in the Städel Museum in Frankfurt4 or the portrait of a baby – signed and dated 1646 – in Zuylen Castle.5 These two paintings are, like our portrait of a small girl, modest in size and painted on wood panels. The child, seen either half-length or up to the knees, is also painted against a dark background, a characteristic more often found in the portraits of adult by Jacob Gerritsz. Cuyp.

The state of conservation of our painting, it must be admitted, makes a comparison with the works of Cuyp difficult because the flesh tones on the face of the small girl are worn, leaving little material that could be used to compare the technique used in other portraits by this artist. Moreover, the band or bonnet worn by the girl is unlike any other headgear known at the time in Holland. Portraits of this type were very widespread in seventeenth-century Northern Europe; therefore, the possibility cannot be ruled out that it was painted in the Southern Netherlands, in a German speaking country, in England or even in France.