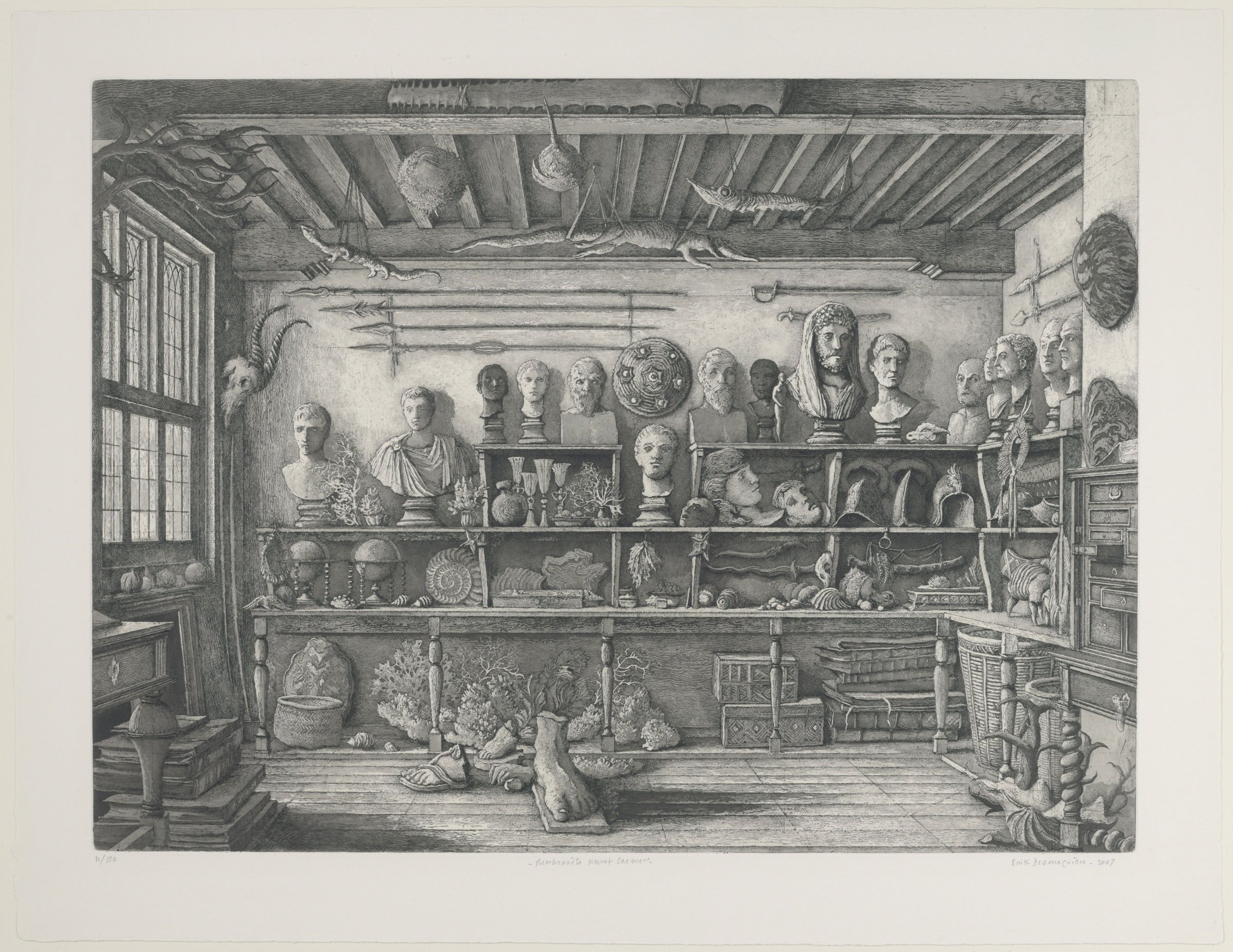 It was in 1971, straight after graduating from the Institut d’Études Politiques in Paris, that Érik Desmazières enrolled in night classes held by the City of Paris to study engraving. His first etchings, dated to 1972, already display an outstanding technical mastery. Playing with the rules of perspective, he delighted in distorting real or imaginary architectures,1 recalling the art of Maurits Cornelis Escher (1898-1972). Érik Desmazières’ compositions most often exclude any visible human presence, asserting instead the spirit of places – either private surroundings2 or public spaces.

A separate series of etchings on libraries belongs to the latter category.3 The artist’s interest in the theme dates back to 1997 when he produced a set of ten plates to illustrate The Library of Babel, a short story by Jorge Luis Borges (1899-1986). Érik Desmazières also continued to explore places and objects of knowledge with a series on wunderkammern4 and natural curiosities. His first composition – imaginary –, Wunderkammer II,5 set inside a decorative frame featuring Mannerist motifs, evoked the orderly plethora of a Renaissance cabinet of curiosities. When the artist created Rembrandts Kunst Caemer in 2007, he was looking this time at the reconstitution of a real “chamber of wonders”: namely, that of the Museum Het Rembrandthuis in Amsterdam.6 This was where Rembrandt classified and exhibited his private natural history collection, casts of antiques and objects from faraway lands. By subtly producing mid-tones, with aquatint and using the roulette, Érik Desmazières made the atmosphere of the place seem remarkably dense. The softened late afternoon light, filtered through the window, stretches out the shadows of the objects and carves their volumes with chiaroscuro. This deserted room, however, looks strangely inhabited by a quiet presence. The etcher excluded from his composition the museum features present in the room today, concentrating instead on the contents of this kunst caemer and its arrangement, which expressed Rembrandt’s personality as a collector. Through the eye of Érik Desmazières, it becomes a place invested with a singular poetry that blends encyclopaedic knowledge and the imaginary.

With the utmost ease, the artist shifts from the scale of a room to that of a group of objects, as is particularly evident in Register and Shells,7 a homage to the typically Dutch genre of the still life with books, and a nod to Rembrandt who also represented in a famous etching the conus marmoreus that is depicted here in the left foreground. We again see his particular interest in rarities – and their collectors – in the artist’s book Musæum clausum or Bibliotheca abscondita,8 for which he made a series of prints. In illustrating this parodic description of an imaginary cabinet of curiosities, written in the seventeenth century by Sir Thomas Browne, Érik Desmazières once again erased the boundaries between reality and fiction, between booklore and subjective perception of the world. MNG

3The artist’s work on this theme is certainly consummate in the spectacular views of the Salle Labrouste and the prints storeroom of the Bibliothèque nationale de France, which he engraved respectively in 2001 and 2013.

4Literally, “chamber of wonders” or cabinet of curiosities.

6In its present arrangement that dates to the museum renovation in 1999. Relations between Érik Desmazières with Amsterdam in general, and the Museum Het Rembrandthuis in particular, began in 2003-2004, when the institution held his retrospective, and on this occasion commissioned a portfolio of five etched views of Amsterdam; see Andrew Fitch and Dominique Febvrel, Érik Desmazières. Etchings 1982-1991, New York (Fitch-Febvrel Gallery) 2011, nos. FF 189-193; http://www.fitch-febvrel.com/artists/desmaz_vues.html.