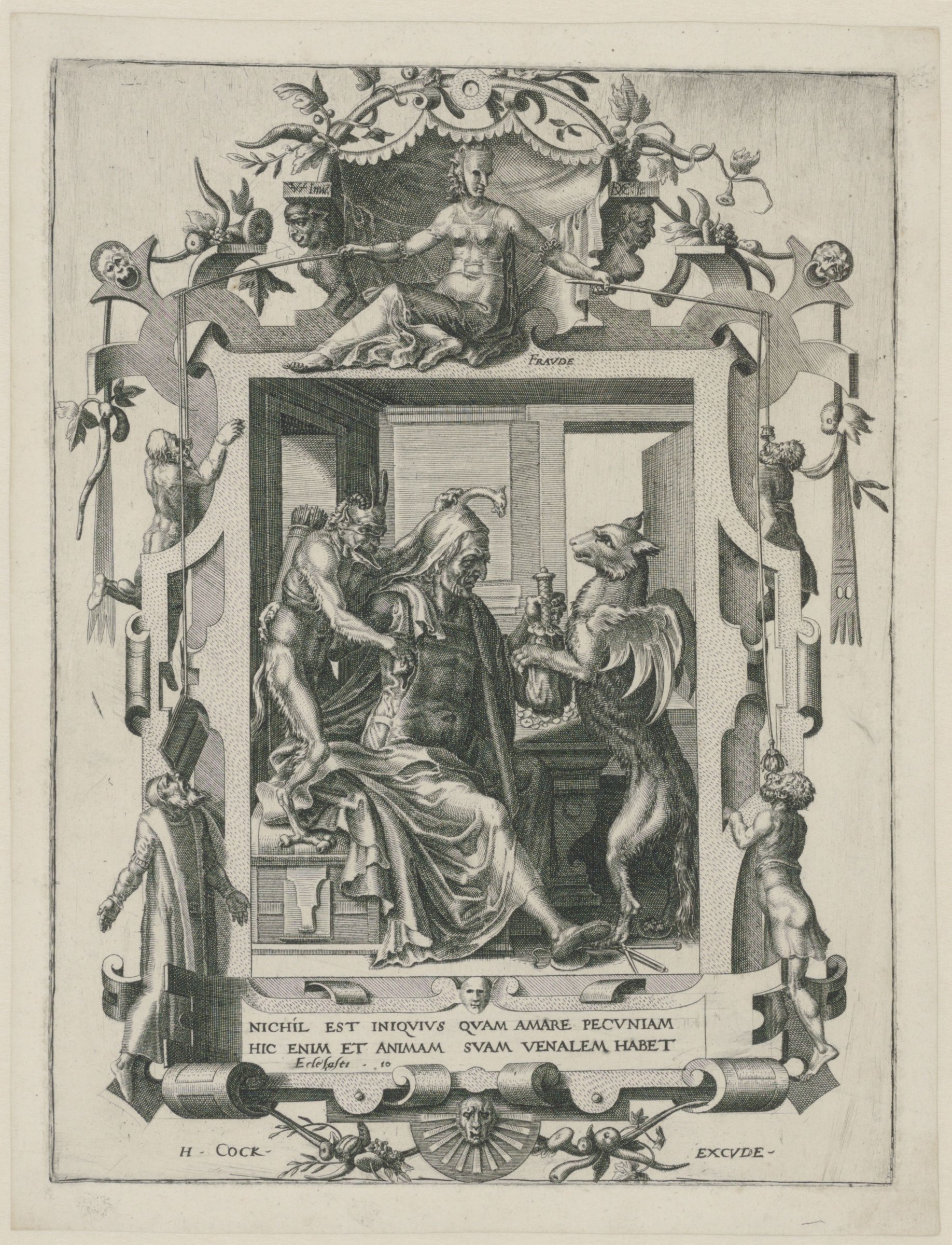 A miser with a fixed, greedy look in his eye is eagerly accepting a bag full of money from a winged wolf, the symbol of rapacity and stinginess. Between them they are trampling the scales of justice underfoot. At the same time the man is embracing a blindfolded devil with a quiver full of arrows on its back who is pressing a fool’s cap on his head, the symbol of folly. The miser’s lust for money, which is illustrated by the coins lying on the table and the money-chest on which he is sitting, is driving him to extremes. In exchange for the bulging purse he is selling his soul to the devil, who is literally ripping his heart out of his chest.

The scene is based on a passage in Ecclesiasticus, the apocryphal Old Testament book of the Bible also called Jesus Sirach. According to the Latin inscription on the print (Ecclesiasticus 10:10), nothing is more unjust than the love of money, because a miser even offers his soul for sale.1 In the sixteenth century, when the use and power of money grew by leaps and bounds, warnings were made in the visual arts and literature about the dangers of avarice.2 Dirck Volkertszoon Coornhert, who in addition to his work as an engraver was famed as a philosopher and publicist, regularly condemned this cardinal sin. In addition to two stage plays he produced two series of prints on the subject.3 Although he entrusted the designs of these prints to other artists, Coornhert must undoubtedly be regarded as the prime mover behind these series. His printmaking was therefore both a means of spreading his ideas and a source of income.

Greed and Avarice is one of a group of six scenes of fools that Coornhert engraved after designs by the Haarlem glass painter Willem Thibaut (1524/26-1597).4 Two prints in this group that were signed by both Thibaut and Coornhert are dated 1556 and 1557. The print discussed here is undated and is much larger than the other ones in the group. Moreover, the scene is set in a decorative scrollwork frame that is reminiscent of the ornaments of Hans Vredeman de Vries (1527-1609) and Jacob Floris (1524-1581).5 Seated in the border at top centre is the personification of Deceit, who is wearing a mask in order to hide her truly demonic features from the world. She is holding two fishing rods from which she is dangling bait in the form of a book of deceptive or false knowledge and bags of money. A scholar and three other sinners cannot resist the temptation and are already swallowing the bait.

Impressions of this print are rare.6 The one in the Fondation Custodia is of a very fine quality and was undoubtedly one of the first impressions to come off the press. The thin guide lines, which Coornhert drew first with drypoint before working the scene up with the burin, are still clearly visible here and there. There is an offset of another print on the back of the sheet. MR