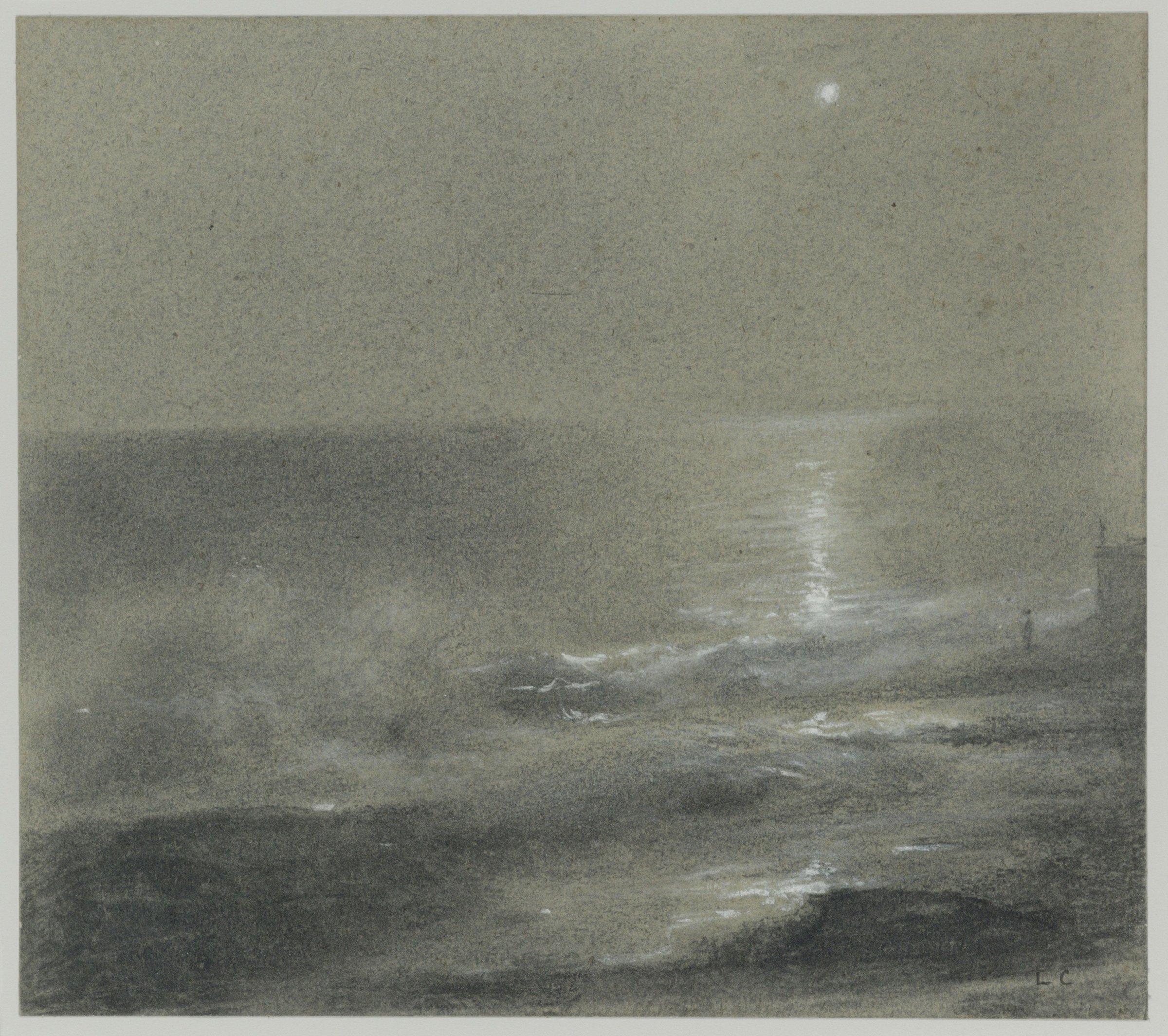 Léon Cogniet’s awakening to landscape happened during his time in Rome. The French painter had moved to the city shortly after winning the Grand Prix in 1817, and together with Achille-Etna Michallon (1796-1822), he belongs to the generation of painters trained there who directly applied the teaching of Pierre-Henri de Valenciennes (1750-1819). The Musée des Beaux-Arts of Orléans, depositary of Cogniet’s studio stock bequeathed by his widow in 1891, holds a great many testimonies to the artist’s work as a Romantic landscapist.

A series of views in oil depicting the Normandy coast, in particular,1 reveal his sensibility to atmospheric effects and his gift for rendering flowing visions of sky and sea. These seascapes, which various inscriptions allow us to date between the years 1850 and 1870, share many similarities with the present drawing. In this case, however, the use of a dry technique is uncommon among the artist’s landscapes: he generally executed them in oil on paper, or even in ink. He appears to have kept these works for his own use, subsequently mounting several of them.2 The square format of the work, which emphasises the abstract dimension of this night-piece, is equally unexpected. Above all, though, it is the textural effects describing the vaporous foam – created by means of impastos of oil paint reworked with a brush,3 or, in our drawing, with white chalk heightening – that express Cogniet’s originality to the utmost.

The artist, with the sparest means, evokes this moonlight on the sea, making the most of the paper’s colour and texture to bestow an overall harmony on his drawing. The moon’s reflections are rendered in white chalk, applied in distinct accents on the crest of the waves or blended with the stump. Sky and sea appear to merge in one and the same shifting liquid element. The vertical of the cliff alone, on the right, connects this vision with the tangible world. Ultimately, the artist sought to create a total sensorial experience, as visual as it is tactile, suggesting the impression of a mist enveloping the beholder. A lonely silhouette,4 at the foot of the cliff, gives this scene its melancholy, contemplative mood. In this drawing, Cogniet achieved a formal freedom and poetic impression that the rest of his graphic oeuvre might not suggest him capable of. As its provenance is not known, it is difficult to come to a conclusion about this sheet which, exceptionally, bears the artist’s monogram: should we, perhaps, suppose it was a personal work given to a near relation? MNG