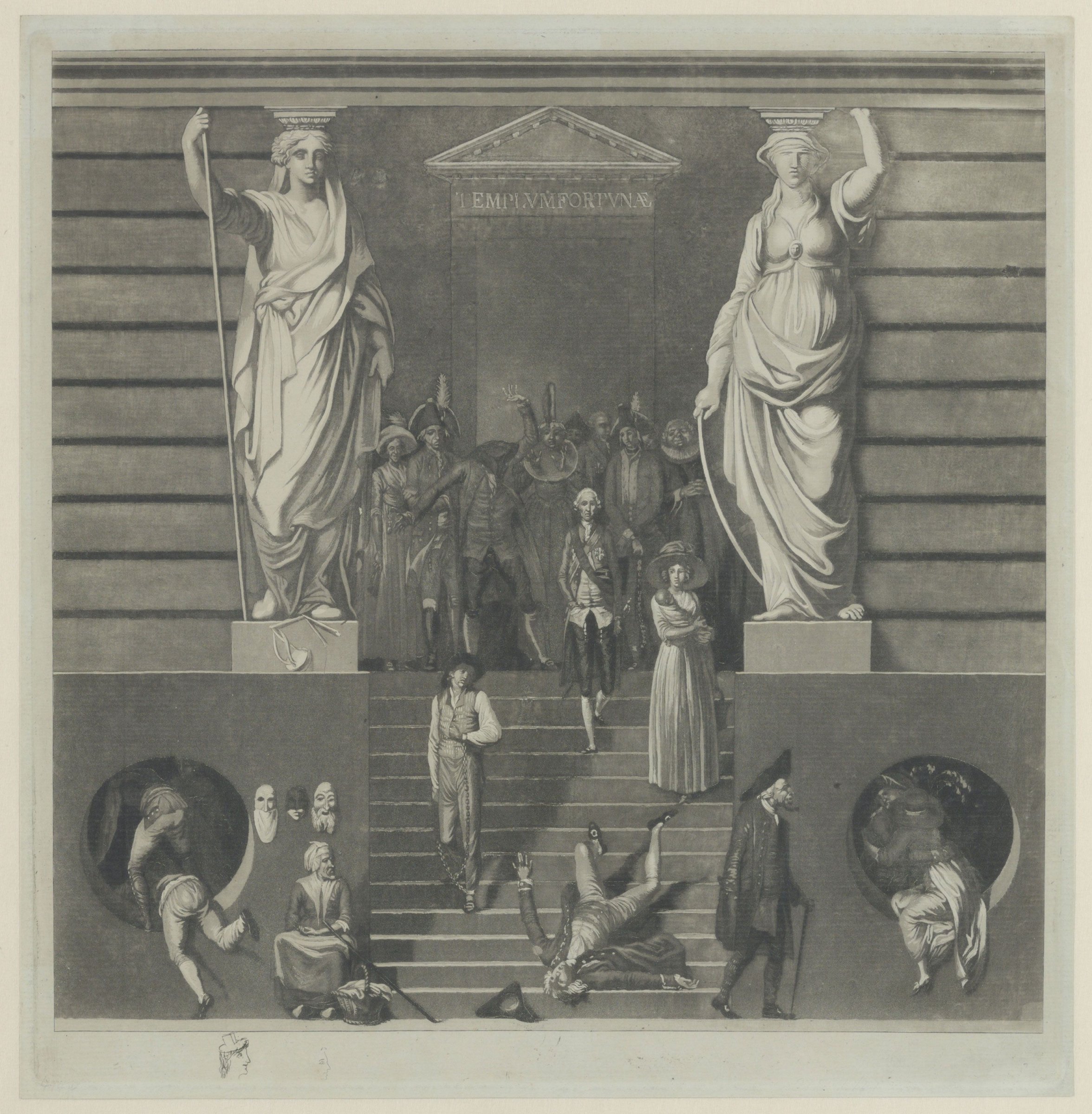 This Temple of Fortune, which was conceived with a keen eye for detail and great iconographic sophistication, is based on a fire-screen painted by Nicolai Abraham Abildgaard (1743-1809). He was the leading Danish history painter of his day, and the screen must have been commissioned by Johann von Bülow (1751-1828), Lord-in-Waiting and Lord Chamberlain to Crown Prince Frederik, later King Frederick VI of Denmark (reg. 1808-1839).1 That colourful work has survived and is now in the Museum of National History in Frederiksborg Castle.2 The printmaker Johan Clemens saw it around 1787 in Von Bülow’s reception room in Christiansborg, the royal palace, and it is thanks to him that we know when Abildgaard painted it, for an impression of the print bears the inscription “Abildgaard pinx. 1785 Clemens sculps. 1798.”3 It seems that it was Clemens who had the idea of making a print after the much larger original, which measures 109 × 141 cm and is crowned with a head of Medusa, symbolising the dangers awaiting fortune-hunters. The scene is a satire on the social order of the day that may not have pleased everyone after Von Bülow’s fall from grace in 1793. Freedom of the press was curtailed and censorship was reintroduced in 1799. The rarity of the print suggests that there was never a trade edition.4 But what is going on in and around the temple?

The entrance is flanked by two caryatids which Abildgaard copied from engravings of 1703 by Gérard Audran (1640-1703) after frescoes by Raphael in the Stanze di Eliodoro in the Vatican, where they symbolise Peace and Protection.5 Abildgaard transformed them into Justice on the left, who has discarded her crucial attribute of the scales, which lie broken at her feet. On the right Minerva is leaning on her shield, blindfolded and without her spear. In Else Kai Sass’s exemplary interpretation of the iconography and genesis of this work this is an allusion to the saying “Fortune knows reason nor law”, which is found as far back as in the Greek Anthology.6

The figures crowding around the temple tell us all we need to know. Everyone is trying to get into the building, including those who have already been thrown out. Seated on the left is a woman selling masks, which are synonymous with deception. People are sneaking their way into the temple through circular openings beside her and on the right. At the top of the stairs there is an older masked woman who has latched onto an officer, albeit an elderly one who has been invalided out of the service. A fat woman is wearing a huge collar with a foxtail and a bell, her hands imprisoned in the fabric. It is an outfit known as a ’fiddle’ that was used for the public punishment of prostitutes. Standing beside her is a manacled soldier, probably a deserter. On the right there is a fat priest, the traditional embodiment of gluttony. There are several courtiers, whose lives in those days were governed by fortune, both good and bad. One of them is standing at the top of the staircase and pulling a face, while two others are descending the stairs. One of them is walking, while the other one is tumbling down backwards under the gaze of another man who has been sentenced to life imprisonment and is laden with chains. On the other side there is a woman with a baby in her arms. It is not clear what she signifies. Else Kai Sass suggests that she is an abandoned mother, but also thinks that she may have had a more personal significance for Abildgaard. He had suffered in his marriage and was divorced from his first wife, so this woman could represent the ideal wife: beautiful, elegantly clad, and born for motherhood.7 Finally, an elderly man who may have learned wisdom the hard way is walking past the temple, ignoring the throng around it.

Clemens went to great lengths to depict the scene accurately and in the same direction as the painting, so that all the facets of the iconography remain recognisable. The Kongelige Kobberstiksamling in Copenhagen has a state of this print with the above-mentioned signature and date in the margin, but without the tone that was later applied to the outside of the temple. Clemens evidently decided to burnish the signature off but to work the plate up further in aquatint to make the scene more sombre. He did add something in the bottom margin though: a childishly drawn head and hat, possibly to suggest the presence of a rather naive viewer – us, in other words – who is looking at the scene and is beginning to learn something of life’s realities and understand the stupidity of relying on fortune. The scene by Abildgaard and Clemens is in a long tradition of allegories warning against the hazards of fortune. One of them, the Tabula Cebetis, was based on a classical text that was very popular in the Renaissance. It describes man’s path through life as being strewn with temptations of every kind, among them a meeting with the personification of fortune.8

In 1989 the British Museum acquired an impression of Clemens’s aquatint without lettering from the print dealer Christopher Mendez. The maker had long been anonymous, so Antony Griffiths posed the problem of his identity as ’A quiz for our readers’ in the journal Print Quarterly.9 The solution arrived by return of post, from Carlos van Hasselt, then director of the Fondation Custodia.10 It is very fitting that the institution that he led for so many years (from 1970 to 1994), and where he built up a large collection of Danish art on paper, is now the owner of this intriguing rarity. GL

6See Christine Stevenson in The Burlington Magazine 128 (1986), p. 682, for a deservedly positive review of Kai Sass’s book. The origin of the idea can be found in W.R. Paton (ed.), The Greek Anthology (Loeb Classical Library, no. 85), Cambridge, Mass. 1918, vol. 4, p. 35, Book X, 62: “Fortune knows neither reason nor law, but rules men despotically, carried along with no reason by her own current. She is rather inclined to favour the wicked, and hates the just, as if making a display of her unreasoning force.”