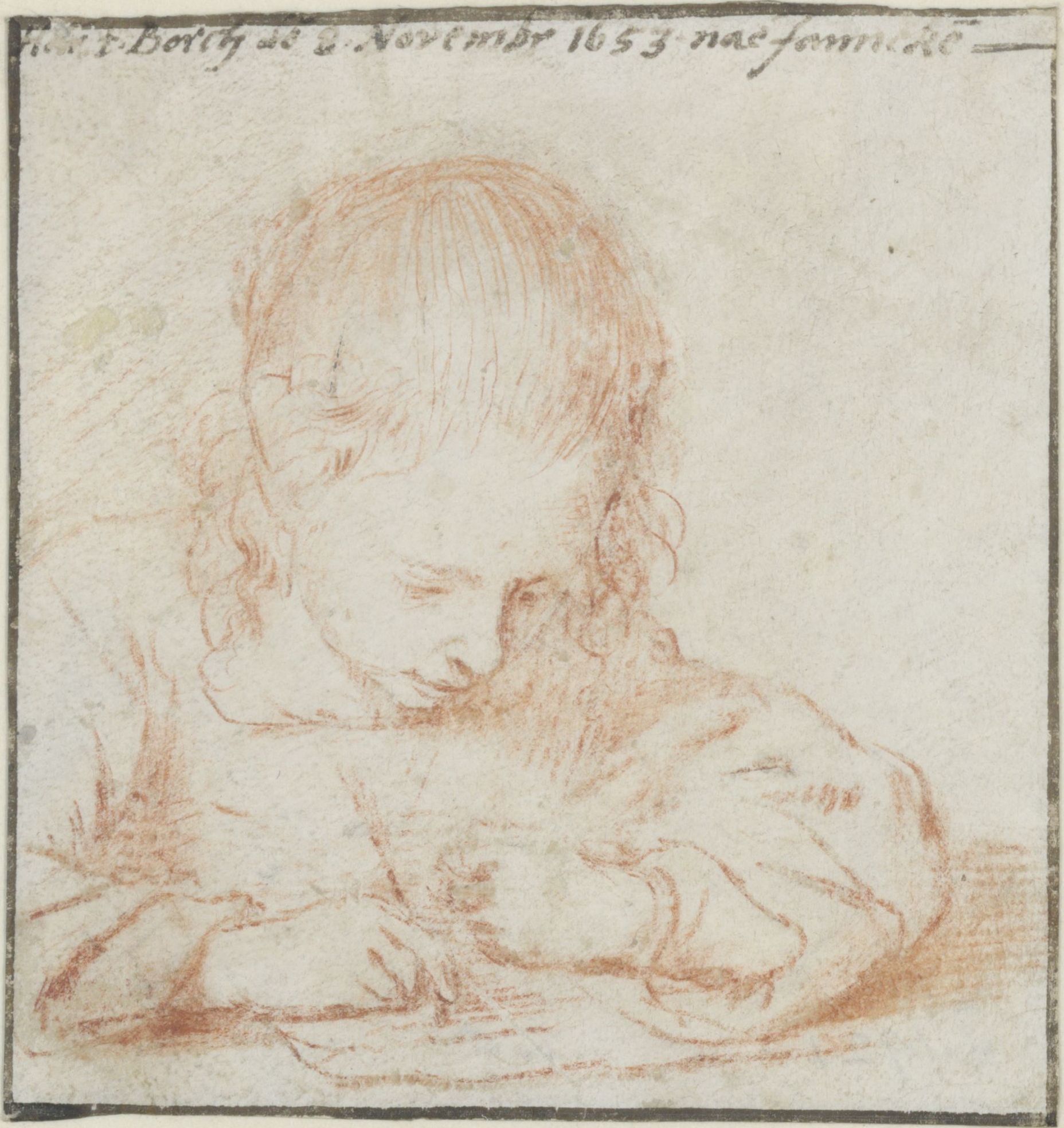 In the Ter Borch home – in the eastern provincial town of Zwolle – Gerard the Elder (1582/1583-1662) taught his brood to draw from a very early age. He also preserved their work very carefully. After her father’s death, Gesina ter Borch (1631-1690) continued this task and instructed those who came after her to do the same, so that the work remained in the family. The Ter Borch legacy was consequently almost intact when the Rijksmuseum’s Print Room purchased the thousand-plus drawings from the last heirs in 1886. Only around ninety drawings, including this sheet by Harmen ter Borch, became separated from the family’s collection.1

By annotating the sheets, usually on the recto, Gerard the Elder kept a record of who had made the drawings, and often also when they were made. This drawing has an inscription in his handwriting: Har.t Borch de[n] 8.Novembr 1653. nae Janneke[n]. Thanks to this, we know that fourteen-year-old Harmen is the maker of this sheet and that the girl represented was his youngest sister Jenneken (both children were from Gerard the Elder’s third marriage to Wiesken Matthijs (1607-1683)). She is shown writing and looks down attentively. Harmen had followed in the footsteps of his father and older brother Gerard the Younger (see cat. 9) by using family members as models, and so did the other children – the examples are countless. All these drawings, with their father’s notes, give us an insight into the Ter Borchs’ family life and the domestic environment in which the brothers and sisters diligently practised drawing together.2

Everyday life and simple occupations were great sources of inspiration for Harmen, far more than they were for the other children.3 Harmen usually used chalk for drawings naer t leven (from life) like this one, as opposed to the pen-and-ink technique he only used when he drew from his imagination.4 The use of red chalk here enabled him to portray Jenneken in an almost delicate way. The fact that Harmen drew on vellum is unusual and emphasizes the fact that the drawing of his thirteen-year-old sister held a special value for him.5

1‘Today fewer than a hundred drawings by the Ter Borchs are to be found outside the Amsterdam Print Room.’, see McNeil Kettering 1988, p. XXIX.

2‘All the artistic members of the Ter Borch family stimulated one another, and sometimes, it appears, they worked on their drawings side by side. The artistic relationship between Harmen and Gesina seems to have been especially close.’, see McNeil Kettering 1988, p. 195.