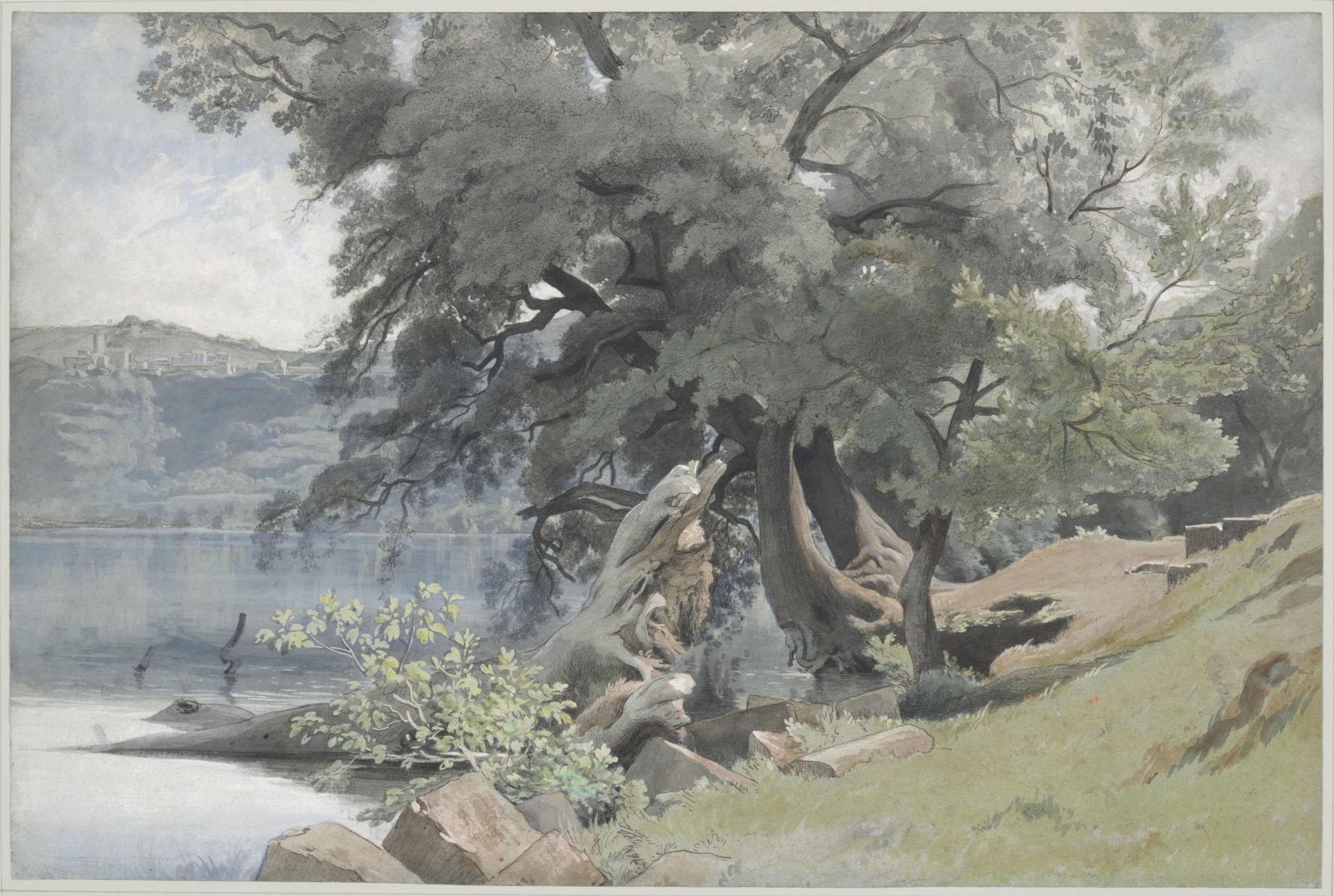 Among the views painted or drawn by Benouville in Italy, Lake Nemi and the surroundings of the town of Genzano appear to be privileged subjects1. Since Antiquity, the site – which is some thirty kilometres to the south-east of Rome – had been appreciated by Roman patricians for their rustic sojourns. Proving that its attraction was still clearly vivid in the eighteenth and nineteenth centuries, it was also immortalised on many occasions by John Robert Cozens (1752-1797)2 and William Turner (1775-1851).3 Unlike his British elders, who had preferred views overlooking the lake, Benouville chose a most unusual vantage point for this very large watercolour.

This view of Lake Nemi is mostly a pretext for a masterly study of trees. The bulky outline of the holm oak clinging to the bank of the lake, taking up the upper three-fourths of the sheet, deftly organises the composition.4 Effortlessly playing with a dry graphic technique – black chalk – which he associated with watercolour and gouache, Benouville detailed the rough texture of the bark on the trunk and the branches. He kept the pen drawing – flowing and calligraphic – to outline the masses of foliage, jotted down with the sparest means, the structure of the planes rendered above all by shades of watercolour. Strokes of white gouache shape the volumes in the bright Southern light, composing a chiaroscuro. As when working with wash, Benouville built the principal features of his landscape with broad flat colour tints, subtly merged here in a similar camaïeu: green-brown for the bank, grey-green for the foliage. What is more, the artist gave a definite impetus to his composition by arranging his foreground as a repoussoir, on oblique lines: guiding the eye up to the edge of the water, they contrast with the serene horizontality of the opposite bank, in the background. Benouville also suggests the wild vitality of this nature’s nook by depicting the trunk of the uprooted tree fallen into the lake, its stump exposed, and the heap of boulders that had tumbled down the steep bank. He treated the latter like a group of simple geometric forms, similar to the houses represented in his Landscape of Italy with a Perched Village (see cat. no. 2), which was done during this same prolonged Italian period.

Poised between a classical construction of the landscape and a naturalist sensibility, this watercolour by Benouville bears the stamp of his training experience alongside Camille Corot (1796-1875) (see cat. no. 16), with whom he worked for several months in Rome in 1843. His particular interest in motifs of remarkable trees, which he notably shared with Pierre-Henri de Valenciennes (1750-1819),5 can be perceived in the many sheets he devoted to the study of this motif, and of which the Fondation Custodia is fortunate to hold an example.6 MNG